Posted in: Disc Reviews by Brent Lorentson on March 6th, 2013 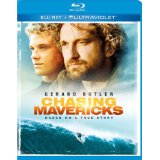 Normally when I see trailers for films about “inspiring true stories” I try to remind myself to avoid that film at all costs.  Sure I’ve seen more than a few of these kinds of films, but that’s the problem with them, once you’ve seen one you’ve seen them all.  When Chasing Mavericks was brought to my attention I was ready to ignore, but then I gave it a quick look at IMDB and to my surprise it had two directing credits, Curtis Hanson (L.A. Confidential, which just so happens to be in my all-time top ten films) and Michael Apted (Gorky Park, Nell, Gorillas of the Mist), and with that my mind was made up.  And lucky me it turned out to be one of my favorite films I’ve had the opportunity to review.

Ever since he was little Jay Moriarty (Johnny Weston) has been fascinated by the currents and the waves they produce.  The obsession sets Jay off to learn how to surf, and by the time he’s 15 he’s managed to become one of the best young surfers in Santa Cruz, but the waves he’s conquering just aren’t cutting it.  Till one morning he follows a local surf legend, who just so happens to be his neighbor, Frosty Hesson (Gerard Butler), who is going out on an early surf run.  Where they end up is at a hidden beach where Jay sees the biggest waves that are colossal in comparison to what he surfs daily, and he watches Frosty.  These giants that Jay and many others believed to be nothing more than mythic surf lore are what are called Mavericks.  And it is from this day on Jay sets off to try and surf one of these waves. For fear Jay will only get himself killed, Frosty agrees to train him to be able to survive the wave, and he has 12 weeks to get himself ready before the season ends.

Even though this is a surf movie inside and out, it really is so much more.  Chasing Mavericks is a film that really you don’t see any more, which is a bit of a shame.  As I watched this for some reason my mind kept going back to the original The Karate Kid.  Perhaps it’s the whole mentor/father angle and learning not just the skill but the spiritual side as well.  Or perhaps both having Elisabeth Shue had my mind going back to the 80’s masterpiece (taking liberties with the term since I’m a product of the 80’s and had a slight obsession with The Karate Kid when I was younger).  The mentorship we realize is more than just about learning to survive a wave but life as well.  Frosty sees how Jay looks to him and needs that father figure in his life.  As the bond develops between the two, it’s hard to at times not take a moment and appreciate the chemistry the two have.

As for the relationship between Jay and his mother (Shue), it’s  another layer of this film that helps give us a greater appreciation for the kind of young man Jay is.  For most of the film it’s as though the roles are reversed, and we watch Jay taking care of his alcoholic mother.  She’s constantly getting fired and late on bills; if not for Jay and his job at a pizza place they’d most likely not have a home.  Jay never seems to judge her, and he seems to keep a positive attitude, so why not continue to like her?  But the home life, perhaps it’s my imagination, seemed to be shot tighter and much darker when he was home to the point when we go anywhere else everything seems brighter and more colorful.

But it’s where life takes some sad and dark turns for both Jay and Frosty that the heart starts to tighten and the movie just hooks you.  After a funeral while Frosty is brooding when Jay offers himself to be someone for Frosty to lean on, handled differently this would have been an over-the-top scene, but to the credit of director and the actors they pull it off.  As the rest of the film rolls there is plenty more tugging at the heart strings but never trying too hard either.

Beyond the great performances, what makes this film so entertaining and exciting is when we see the characters out on the waves.  The cinematography here is amazing and like nothing I’ve ever seen before.  Had it not been such a strong year for cinematography I think this movie deserves an honorable mention at the very least for best work of 2012.  Knowing pro surfers were used for some of the shots makes no difference to me; just seeing real guys up on their boards tackling giant waves is a cool thing either way.

Chasing Mavericks is presented in its original aspect ratio of 1.85:1.  The 1080p image is arrived at with an AVC MPEG-4 codec at an average of 32mbps.  The release looks so good.  Whether its shots along the coastline or beneath the surface of the ocean everything looks beautiful.  During a dive scene when they are swimming around sea kelp the detail is incredible.  There is attention to so much detail they had to do facial removal scenes in post so we can believe we are seeing the actors performing some crazy stunts.  And thanks to the camera work we can appreciate the size and scope of these waves as we watch the spray sting the surfer’s faces.  A beautiful transfer for sure.

The DTS-HD Master Audio 5.1 track is a beautifully immersive piece of work between music and SFX that enhance the viewing experience better than I’ve had in some time.  Between the power of the waves and the spray of the ocean down to the roll of the water hitting the boards, close your eyes and dip your feet in some water; you might be able to convince yourself you’re out on the ocean yourself.  But even with scenes with the rain you manage to feel right in the middle of it all (as you should).  When the music kicks in (mostly a collection of hits from the mid 90’s) it only drives a scene further instead of overpowering it, an example being when we get a jump in time as Jay is learning to surf as a kid, then moving ahead seven years later.  An excellent mix here.

Commentary by Michael Apted, Brandon Hooper, and Jim Meenaghan:  This is what commentary tracks are supposed to be.  Hearing how Apted got involved with the film after filming had already begun and working under a cast put together by a different director is something you don’t get to hear often (if ever).  But this track is filled with little facts about the journey/struggle it took to get this film to the screen.  There isn’t a boring moment on the track, which is saying a lot because most commentaries work better at putting you to sleep than actually informing you of anything beyond the obvious.

The Blu-ray release comes with a nice collection of extras that expand from the information filled on the commentary track.

Surf City: (10:30) Here we get to know a little more about Santa Cruz, where the film was shot.  It seems like a quirky little town for modern day hippies and of course surfers.

Shooting Waves: (10:38) An all too brief look at everything that went into shooting the surfing scenes.  The attention to detail in convincing us the actors are the ones on the long and short boards is impressive.  And for those wondering how they managed to get some of the crazy surf angles, the toys this camera crew had to work with are impressive.

Live Like Jay: (10:50) A brief look at the young man the film is about and his passing at such a young age.

Surfer Zen: (10:09) Basically a collection of interviews discussing how various members of the production feel about the “spiritual” side of surfing.

Deleted Scenes: (5:35) A brief collection of scenes snipped from the final cut of the film.  Nothing noteworthy though.

Some may see this and just roll their eyes thinking it’s just some other surfing movie, or some random feel-good movie.  This film has it all, from a solid script, great acting, direction, cinematography, sound track….I bet they even had amazing craft services on set.  For parents that complain they have nothing to watch with their kids that isn’t offensive, violent, or too childish, this is the movie you’ve been waiting for.

Brent Lorentson is a horror writer and film critic based out of Tampa, Florida. With a BA in Digital Film, he co-wrote and co-directed Scavenger Hunt. His short stories have appeared in various horror anthologies. In 2019 his short script Fertile Blood will be a part of the anthology horror film Slumber Party. He is currently working on his first novel A Dark and Secret Place set to be released in late 2019. Favorite Films: Taxi Driver, Fight Club, I Saw the Devil, The Wild Bunch, Dawn of the Dead, A Clockwork Orange, Pulp Fiction, Heathers, The Monster Squad, and High Fidelity.
28 Hotel Rooms Special Forces (Blu-ray)