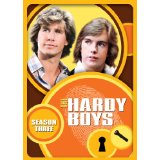 I think it would be safe to say that ever since Edward Stratemeyer penned The Hardy Boys he has garnered a legion of loyal fans of the popular young adult book series.  For many young readers these books are what planted the seeds for them to later become private investigators or join some form of law enforcement.  Then there were the casual readers like myself who became obsessed with the crime genre and would later move on to edgier writers.  Whatever direction readers may have taken, it’s safe to say that the Hardy Boys and Nancy Drew deserve the same respect as other classic characters in fiction like Sherlock Holmes.

I missed out on viewing the first two seasons of the 1977-1979 run of The Hardy Boys, but with each episode being its own self-contained story I was able to pick right up with the story without missing a beat.  For those not familiar with the story, Joe (Shaun Cassidy) and Frank Hardy (Parker Stevenson) are young detectives whose father is a well-known detective, and the brothers simply wish to follow in his footsteps.  In season 3 the brothers have taken a promotion and are now working full time for the Justice Department.

The season starts off strong with a two-part episode, The Last Kiss of Summer. Here we have Joe up against the FBI to take down the man responsible for killing his fiancée in a hit-and-run accident.  The pretty-boy faces and the over-the-top blow dried hair can be a bit of a distraction, but if you can ignore the dated look of the series, the plan Joe has to take down Jocco (the man behind the wheel of the accident) is quite fun to watch unfold.  And for those hoping for something more over the top, there is a sequence where one of the Hardy brothers attempts to go surfing in shark-infested waters.

In a later episode Dangerous Waters, the brothers venture down to the Caribbean to find a woman who has gone missing and is connected to a buried treasure.  This time the villains are a group of modern-day pirates; at first they simply want to sell the kidnapped girl off, though once they find out treasure is involved they begin to realize how precious their captive is.  Joe and Frank go through the motions of finding the girl and even manage to stumble upon some treasure.

In the two-part episode Defection to Paradise, the brothers venture out to Hawaii to help recover a stolen speaker after a band returns from the Russian leg of their big overseas concert tour.  There was a lot that I liked about the episode; for instance, this is the first time in the season where I felt the Hardy Boys actually had to use their wits and teamwork more so than the previous episodes.  But what really got to me was the pandering to the band Bread that makes an appearance and also plays an integral part in the plot.  I’m not big on the gimmicky guest appearances, and this simply worked most of the time as a promo spot for the band instead of an actual episode.  But when we see the brothers up against the KGB and our own government in finding the daughter of a Russian official, well, this is where the show shines.  When the brothers have no one they can trust but one another, this is where you get to the heart of what makes the relationship of the brothers work so well.

Though there is an ample amount of action, and the stories in each of the episodes were fun; I was a little bummed there are was no overall story arc through the season.  Sure they made television differently back then, but it never seemed like the brothers ever really grew or evolved.  The season starts off with Joe’s fiancée dying, but not once is she brought up again in any further episodes.  It could have been a chance for the viewer to attach themselves to a character and let us see Joe go through the mourning process; instead we just get a character that simply evokes no emotion.  I’d say this is the writers’ fault, but the dialog and storylines worked well, especially when considering the time period these episodes were filmed in.

Thankfully Cassidy and Stevenson had a good chemistry together, or else this could have been a show that would have fallen flat from the start.  I wouldn’t go so far as to call this great landmark television, but it was a fun ride that had me feeling nostalgic and wanting to possibly dust off a few of my Hardy Boys books (if I still have any).  There were rumors of Ben Stiller wanting to take a stab at doing a Hardy Boys film, but nothing is in writing just yet.  I think it’s time for a new version of The Hardy Boys to hit the small screen again and reach out to a new generation.  After all, it can’t be any worse than Honey Boo Boo or any number of reality shows out there numbing the brains of audiences worldwide.

Brent Lorentson is a horror writer and film critic based out of Tampa, Florida. With a BA in Digital Film, he co-wrote and co-directed Scavenger Hunt. His short stories have appeared in various horror anthologies. In 2019 his short script Fertile Blood will be a part of the anthology horror film Slumber Party. He is currently working on his first novel A Dark and Secret Place set to be released in late 2019. Favorite Films: Taxi Driver, Fight Club, I Saw the Devil, The Wild Bunch, Dawn of the Dead, A Clockwork Orange, Pulp Fiction, Heathers, The Monster Squad, and High Fidelity.
24-Hour Love The Incredible Burt Wonderstone