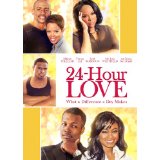 I believe a title change is in order for this movie. For starters, it’s generic and has no appeal; a title should grab you, entice you, and intrigue you. 24 Hour Love does none of that; I understand the title, supposedly time-lining and emphasizing how a single day can alter or destroy the love that exists between two individuals, but after watching the movie, the premise and the title appear to be contradictory. Better titles would have been Love Trials, Unconditional, or my favorite, Commitment.

The film is broken up into multiple storylines; a few of them reference characters from other stories hinting at the happenings in each of the arcs are occurring simultaneously (that can also be determined by the film’s built-in sequence timeline) but they are otherwise unconnected from one another. The first story entitled “Eternal Love,” covers the topic of jealousy; a husband struggles with his feelings about the relationship between his wife and one of her coworkers. The second story, “Tough Love”, deals with a couple (Flex Alexander and  Tatyiana Ali) who mix business and with pleasure and all the repercussions that come along with it. “Crazy Love,” the most compelling story of the collective, deals with a woman (Lynn Whitfield) who had been taken advantage of by someone she trusted and her confronting him about it. The other storylines featured themes of unplanned pregnancy, financial strains, infidelity, as well as friend betrayal.

The individual stories are interesting enough; however, many of the story arcs end with unsatisfactory resolutions, namely “Tough Love” and  “Committed Love”. The only one that felt like it had a true conclusion would by the tale titled “Crazy Love” featuring Lynn Whitfield who was the only one carrying her arc on her own (another one person was present, but the entire storyline is viewed from her perspective). Whitfield managed to reach into her past and bring out some of the same intensity that made her stand out as Brandi, Martin Lawrence’s former flame turned stalker in the 1996 comedy/thriller A Thin Line Between Love and Hate. Another breakout star in the film would have to be Flex Alexander as the committed and helplessly in love manager of recording artist, “Simply” (Tatiyana Ali). Alexander was successful at conveying the necessary wounded pride of a man about to be betrayed by his beloved; he also did very well transitioning from wounded to vindictive in a matter of seconds. The best chemistry belongs to the collaborative efforts of Malinda Williams and Keith Robinson as a couple in financial straits (possibly the only other storyline with an actual conclusion).

As a collective the stories add up to a movie in my eyes, the fact that each stories is unrelated from one another damages that outcome almost as much as the resolutions in most of the tales. Each one appears more as a one-act play, which would have been great, but for that to work they all needed to be tied together around the same principle. It is evident that love was meant to be that principle, but the arcs fall short of illustrating that successfully.

Jeremy Butler is a film school graduate of the International Academy of Design and Technology. He is been writing for Upcomingdiscs since 2012; however, movies have played a big part of his life for much longer. Favorite genres include horror, science fiction/fantasy, and comedy. Favorite movies are V for Vendetta, Boondocks Saints, Kiss Kiss Bang Bang, and The Godfather.
Real Vikings Collection The Hardy Boys: Season 3