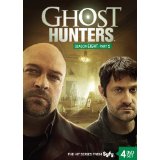 Something strange in your neighborhood? Who ya gonna call? Well, if Bill Murray and Dan Aykroyd are busy and you don’t mind being on TV, you call SyFy’s Ghost Hunters. For eight seasons, the team from T.A.P.S. (The Atlantic Paranormal Society) has gone to various spooky locations to investigate claims of paranormal activity. Led by Jason Hawes and Grant Wilson, T.A.P.S. takes on a variety of cases in the first part of this season that send the team from a WWII aircraft carrier and a haunted amusement park to Providence’s City Hall.

For those unfamiliar with Ghost Hunters, each episode follows the same pattern. Jason and Grant get info from their client on the eerie goings-on before the team splits up to investigates the location. After the investigation wraps, the team analyzes the audio and video footage they’ve recorded and presents their findings to the customer. While formulaic, I feel it adds an air of legitimacy to the investigations. To see the team use the same equipment and techniques the same way again and again shows that the team has a methodical approach to their work.

This partial, 14-episode season actually has a neat little story arc. Within the first few episodes, Grant — also one of the founders of T.A.P.S. — announces he’s leaving the show. He doesn’t say why, just that it’s personal; not anything relating to the show or team. It’s really interesting to see how Jason and the rest of the crew react to this news. After his announcement, it seems as if the crew goes out of its way to find unique cases — like investigating a place called Bube’s Brewery (pronounced “boobies”) — and step up their game to make Grant’s last cases really special. It’s great to see the team’s sense of family and unity.

Probably the main thing I like most about this show is that T.A.P.S. first tries to debunk the claims. They look for real-world explanations rather than attributing everything to the paranormal, unlike some other ghost shows (*cough Ghost Adventures cough*). Another point in T.A.P.S.’s favor is the respect they show to both the living and the dead. Every member of the team seems to genuinely care. Whether it’s quelling a nervous pregnant woman’s fears or playing with the spirit of a lonely little girl, T.A.P.S. shows respect and takes every investigation seriously (well, except for laughing about Bube’s Brewery). These two reasons are why Ghost Hunters stands above other shows in this genre.

Personally, I don’t believe in ghosts and I feel that most “paranormal” things can be explained away. However, my two favorite episodes in this set — “Haunted by Heroes” and “Frighternity” — feature eerie things I can’t explain. “Frighternity” features a voice over a PA system that hasn’t’ worked since WWII, and a ghostly infrared image shows up on “Haunted by Heroes.” Both of these phenomena were witnessed by different teams and, unless the T.A.P.S. crew are the world’s greatest actors, I believe something creepy was going on. The fact that these two episodes occur on WWII-era (my favorite historical period) ships is just gravy.

My one big complaint with this show is the background music. Every episode has the same vague “danger music” playing in the background while the team investigates, as well as during some intense moments and the final reveal. Normally, I wouldn’t mind the music, but it’s frustrating when a team member hears something and I can’t. It’s even more frustrating when it occurs as they’re revealing it to the client. I also wish they’d explain more about what their gear does and how it works, but that may just be the geek in me.

Whether you believe in ghosts or not, Ghost Hunters is a pretty fun show to watch. If you’re a fan, this is a must-have for your collection because it features Grant’s last case. But even if you’ve never seen an episode before, you can just jump right in and enjoy the creepy goodness.