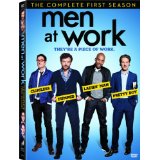 Well, would you look at that: the sidekicks from previous popular primetime series after each of their shows have ended, banded together to form their own television series. Though it is not uncommon for the supporting cast of a TV show to try to break out on their own either right before or right after their former show receives the axe, it is rare that said show makes it through its first season, let alone gets renewed for a second season; the exception being Men At Work (not to be confused with the film by the same name starring the Sheen family, with which it shares no relation as far as I can tell).

Leading the show is Danny Masterson (That 70’s Show) as Milo Foster, a guy down in the dumps after the recent breakup with his girlfriend of five years, Lisa (Amy Smart, Shameless). His best friends and coworkers Tyler (Michael Cassidy, THE O.C.), Neal (Adam Busch, Buffy the Vampire Slayer), and Gibbs (James Lesure, Las Vegas) take it upon themselves to help him get over the breakup by any means necessary. Ladies’ Men Tyler and Gibbs subscribe to the philosophy that the best way to get over someone is to get under someone else. Neal, who has been shacking up with Amy (Meredith Hagner, Royal Pains), the boss’s daughter, for the last two years, believes that Milo needs to go at his own pace until he’s ready, a belief that is openly mocked by the others including Milo.

My impressions of the show back when I first saw the commercial for it were borderline; I thought, this show has the potential to be very good or completely irrelevant (check the rating at the top to see what side it came out on). From its original appearance it was evident that it was a guys’ show, but I never expected it to become this guy’s (pointing thumbs at myself) show. What I really enjoyed about the series was how it managed to remain consistent; the pilot episode set the bar high, and I expected the show to falter midseason; however, the show continued along the same line all the way to the season finale. The chemistry of the cast is effortless. From the first episode, I almost forgot that they were actors instead of employees of Full Steam Magazine. The jokes are spread evenly among them all; however, Masterson’s position as the central character of the cast is apparent from the very beginning.

The show is true to its name with most of the background generally being set at Full Steam Magazine Publishing, the company at which each of the characters are an employee. Part of the show’s premise is how most of the episode plots are rooted in the workplace or share some relation to the workplace, thereby again living up to its title. The plots are easily relatable; everything that occurs in the series can absolutely happen in the workplace or everyday life. Adding to the show’s appeal is the philosophy of life according to men, wise words that are presented to the viewer normally by Cassidy’s and Lesure’s characters. The show also appears to have its own language, introducing new words that have without question made it into my vocabulary and soon the dictionary.

Naturally the series features several guest stars, and naturally the most notable would have to be the two from Masterson’s old stomping ground: Laura Prepon and Wilmer Valderrama. Other guest stars include Ethan Suplee, J.K. Simmons, Stacy Keibler, and William Baldwin.

Best Episode: Pilot episode, the original is always the best.

Jeremy Butler is a film school graduate of the International Academy of Design and Technology. He is been writing for Upcomingdiscs since 2012; however, movies have played a big part of his life for much longer. Favorite genres include horror, science fiction/fantasy, and comedy. Favorite movies are V for Vendetta, Boondocks Saints, Kiss Kiss Bang Bang, and The Godfather.
House Arrest Ghost Hunters: Season Eight – Part 1