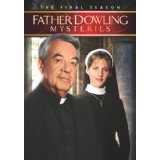 The third season would end up being both the longest season and its final one on television. It was the only year that the show enjoyed the opportunity to spread its wings over a complete run of episodes. It aired an entire season from September to May in 1990/1991. That meant we got a lot of good episodes that are available in this release. Father Dowling and Tom Bosley are both gone now. I can safely say they haven’t been forgotten.

Catholic priests are used to hearing confessions, but for one particular pastor in Chicago, the usual confessions about using the Lord’s name in vain or stealing a couple of paper clips from the office just weren’t exciting enough. Father Dowling loved reading mystery books, and it appears to have sharpened his own powers of observation and deduction. As luck would have it, crimes and mysteries would simply fall into his lap. With the help of Sister Stephanie, better known as Sister Steve, he would step away from his pastoral duties to track down clues that were elusive to the Chicago Police Department. You might just say he was the answer to their prayers. All the while he would attempt to keep the financially-strapped Saint Michael’s parish on solid footing.

Tom Bosley was the perfect choice to play the lead character here. America had already adopted him as the television father of an entire generation with his role as Richie Cunningham’s father on the hit series Happy Days. He has a quiet and soothing demeanor that is quite suited to a man of the cloth. He had such a gentle way about him that he actually reminded me somewhat of my own childhood pastor and friend. The cast also included the granddaughter of famed 1950’s television couple Ozzie and Harriet Nelson and the daughter of their teen-idol-singer son Ricky Nelson. Tracy Nelson adds the more manic pep counterpoint to Bosley’s easygoing nature. Sister Steve was once a street-wise juvenile delinquent until Father Dowling turned her life around and she became a nun. She was often found rushing headlong into dangerous situations and appeared to be able to score jobs at crucial businesses without any effort or interview. The Father and Sister persona also allowed them to gain the trust of those holding information they might need. Like Columbo, they made a career out of being underestimated.

The series had its share of television mystery clichés, but the casting of Bosley and the church angle made it a bit more clever and original than most. Neither network was willing to pump a ton of money into the show, so the production values weren’t always as high as other shows of the period. It was almost doomed from the start, but now you have a chance to see it with this 2-disc release. It’s absolutely worth a look. It’s tame family entertainment with a solid performance thrown into the mix by Bosley. In some ways, I think the show was ahead of its time. Today there’s a huge market for the odd-character detective. All you have to do is see the success of Monk, Castle, or The Mentalist to see a pattern developing today.

It all starts with The Royal Mystery when Sister Steve takes the place of a royal noblewoman, while Father Dowling tries to keep her from getting killed. The show goes into real good-and-evil territory when Father Dowling goes up against Satan himself in The Devil In The Deep Blue Sea Mystery. Hollywood wants to film a movie at St. Michael’s in The Movie Mystery. Of course, danger is afoot, and it’s up to Father Dowling to figure it out before he has to say another funeral Mass at St. Mike’s. In The Reasonable Doubt Mystery, Father Dowling is on jury duty, and it turns into 12 Angry Men with Dowling the one trying to turn the tide. Dowling’s evil twin brother returns to frame him for a bank job in The Fugitive Priest Mystery. There’s a contract out on Father Dowling’s life in The Moving Target Mystery. The hit man has a change of heart and warns his intended victim. But if he won’t do it, someone else will. The Mummy’s Curse Mystery brings Father Dowling and Sister Steve in contact with an ancient Egyptian curse at the Chicago Natural History Museum.

It all comes to an end, and now you have the entire show on DVD to enjoy for years to come. It’s unfortunate that the series had trouble finding a network and airtime throughout its troubled run. I think there might have been more to see if it had been able to settle in as it started to in its final year. All we can say now is, “you could have been a contender.”

Gino Sassani is a member of the Southeastern Film Critic's Association (SEFCA). He is a film and television critic based in Tampa, Florida. He's also the Senior Editor here at Upcomingdiscs. Gino started reviewing films in the early 1990's as a segment of his local television show Focus. He's an award-winning recording artist for Omega Records. Gino is currently working on his 8th album Merchants & Mercenaries. Gino took over Upcomingdiscs Dec 1, 2008. He works out of a home theater he calls The Reel World. Favorite films: The Godfather, The Godfather Part II, The Body Snatcher (Val Lewton film with Karloff and Lugosi, not the pod people film), Unforgiven, Gladiator, The Lion King, Jaws, Son Of Frankenstein, The Good, The Bad And The Ugly, and Monsters, Inc.
Exclusive Interview With Matthew Arnold Writer/Director Of Shadow People Day of the Falcon (Blu-ray)