Day of the Falcon (Blu-ray) 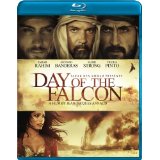 Day of the Falcon is a photogenic, lavish reminder that violence and strife in the Middle East existed well before it could be broadcast on CNN. The film — set in the early part of the 20th century — also works as a throwback to the sort of rollicking, epic-scale adventure films David Lean was making at the height of his powers and that no one seems terribly interested in making anymore. Don’t get me wrong: Day of the Falcon is no Lawrence of Arabia or Bridge on the River Kwai, but it’s an accetable 21st century substitute.

Directed by Jean-Jacques Annaud — who made the great, underrated WWII sniper drama Enemy at the Gates — the movie features a multi-cultural cast and a relatively hefty budget. (Reports put it anywhere between $40 million and $55 million; either way, it’s one of the most expensive films produced by an Arab — Tarak Ben Ammar — which also deals with that part of the world.)

Day of the Falcon opens with the leaders of two rival kingdoms in the Arabian Peninsula settling on a truce. The victorious Emir Nesib (Antonio Banderas) wants the defeated Sultan Amar (Mark Strong) to hand over his two young sons, Auda and Saleh, as insurance against another uprising. The two leaders also agree to leave the area between their two kingdoms, known as the Yellow Belt, as an unclaimed no man’s land. The film fast forwards 15 years with the bookish Auda (Tahar Rahim) and his more aggressive older brother Saleh (Akin Gazi) having been raised by Emir Nesib alongside Nesib’s own two children.

That’s also when a representative from Texan Oil informs Nesib there is a lucrative deposit of crude oil in the Yellow Belt. Nesib believes his people are hopelessly behind the rest of the world — “To be an Arab is to be a waiter at the banquet of the world” — and craves Westernization. Sultan Amar, on the other hand, has no use for oil or money in his kingdom and violently objects when Nesib breaks their truce and allows oil drilling in the Yellow Belt. Caught in the middle of all this is Auda, a pacifist who barely remembers what his dad looks like, was raised by his father’s enemy, and is forced to marry Nesib’s beautiful daughter, Princess Leyla (Freida Pinto).

After a somewhat hasty opening act — I would’ve been ok with one or two more scenes of Auda and Saleh as kids, or Auda interacting with Leyla when they were young — Annaud efficiently lays out all the relationships, alliances and loyalties in his intricate chessboard.

Despite the presence of actors like Banderas, Strong and Pinto, who have each appeared in big-time Hollywood productions, Day of the Falcon belongs to Rahim as Prince Auda. Rahim (A Prophet) has to undergo a transformation from studious boy to military leader that transcends his physical change, and the actor is mostly convincing. It would’ve been easy to simply portray Auda as weak — if this film had an American cast, someone like Shia LeBeouf would probably be cast in the role — but Rahim plays the clever character with a warmness that makes you believe he could outsmart opponents on the battlefield while also getting hundreds or thousands of people to want to follow him. Day of the Falcon rehashes centuries-old conflicts having to do with Old vs. New and (Middle)East vs. West; the film’s slyest move is presenting Auda as a mash-up of the best parts of each opposing worldview.

Strong brings the simmering intensity he almost always uses to play bad guys to the role of not-at-all-bad-guy Amar, who is nevertheless manically attached to his convictions. Meanwhile, Banderas hams it up amusingly in the flashier role of Nesib. Since Nesib’s motives aren’t quite as pure as Amar, he comes off as the nominal bad guy. However, the script by Annaud and Alain Godard does a good job of showing Nesib as more misguided than purely evil or greedy. I was also impressed by scene stealer Riz Ahmed as Ali, a radical doctor who clashes with traditionalist Amar and becomes a valuable ally to Prince Auda. Pinto (Slumdog Millionaire, Rise of the Planet of the Apes) does her Professional Pretty Person thing again; Leyla’s relationship with Auda is not given a ton of screen time, but Pinto and Rahim do spark in their few scenes together. (In other words, movie romances have been built on a lot less.) Liya Kebede pops up pretty late in the game in a lively turn as another potential mate for Auda — after separation and war test Auda and Leyla’s resolve — but it felt like one love interest too many.

The action in Day of the Falcon doesn’t properly kick in until around the 70-minute mark with a thrilling sequence — pitting the natives and nomadic tribes against a group of armored vehicles — that surely set some sort of record for Most Dead Camels. From there, the film’s shift from family/political drama to epic war film is pretty permanent. Though the final battle felt pretty rushed, Day of the Falcon works best as an old-fashioned (in every sense of the word) reprieve from the greenscreen extravaganzas that currently dominate movie screens.

Day of the Falcon is presented in an aspect ratio of 2.35:1. The 1080p image is arrived at with an AVC MPEG-4 codec at an average of 35 mbps. The first thing I noticed on this Image Entertainment Blu-ray was how well the colors from the costumes popped amid the relentlessly arid desert landscape. Whites, the preferred attire of Emir Nesib and his men, also showed up nicely against the tan background (Contrast and black levels, especially during a striking shot of a pool of oil on a patch of sand, were solid overall.) Speaking of the landscape, the wide views of the desert — which are really the money shots for this type of film — were not quite as consistently crisp and breathtaking as they could’ve been. (At least the climactic battle looked amazing.) Close-ups were — not surprisingly — the strongest, while medium shots appeared occasionally soft. There is also subtle, pleasing grain throughout, which actually fits the sandy surroundings perfectly. From a visual standpoint, this Blu-ray had a chance to hit a home run given the film’s scope; instead, it banged a stand-up double off the outfield wall.

The DTS-HD Master Audio 5.1 track makes a strong first impression thanks to Oscar winner James Horner’s (Braveheart, Titanic) appropriately grand score. The English-accented dialogue from the diverse cast comes through well enough, but my favorite part about this track is the way the subs shook my floor during battle sequences. (Thanks to the subs, we hear the armored vehicles approach before we actually see them…just like the characters on screen.) Atmospheric noises — mostly the whooshing wind of the desert — have to jockey for position with Horner’s relentless score on the rears, but are very effective nonetheless.

The Making of Day of the Falcon: (42:01) This comprehensive documentary was filmed back when the movie was still called Black Gold and takes us from the project’s inception all the way through principal filming and post production. Producer Tarak Ben Ammar talks about wanting to tell a “Hollywood-quality” story in terms of scope that wasn’t a Hollywood interpretation of Arab history. The balance of remaining authentic while creating a commercial movie designed to make money somewhat mirrored the plot of the film, even if no one said it out loud here. The cast and crew also talk about filming in Tunisia during a real-life revolution that was also reminiscent of the story they were making. There’s plenty of footage of Annaud prepping his battle scenes and an amusing glimpse of Antonio Banderas throwing himself into an ADR session.

Transforming the Desert — The Visual Effects of Day of the Falcon: (3:13) A cool, wordless demonstration — propelled by Horner’s music — showing how visual effects were seamlessly incorporated into the background of many shots and how they bolstered the film’s enormous battle scenes.

From Storyboard to Screen: (2:56) This side-by-side comparison is another neat look at how concept art turns into a finished filmmaking product. Depicts the scene where Auda and the nomadic tribes play possum before attacking an enemy plane.

It’s a shame Day of the Falcon didn’t get a proper theatrical run in the U.S. because, although its story about honor and betrayal remains engaging on the small screen, this type of cinematic yarn is really meant to be seen on as big a screen as you can find.

Big-budget historical epics with big battles and big romance increasingly hard to come by at the multiplex. So if you’re jonesing for this particular genre, give this Blu-ray a look.