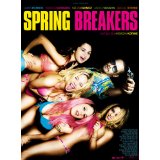 “I’m tired of seeing the same thing. Everybody’s so miserable here because they see the same things every day, they wake up in the same bed, same houses, same depressing streetlights, one gas station, grass, it’s not even green, and it’s brown. Everything is the same and everyone is just sad. I really don’t want to end up like them. I just want to get out of here. There’s more than just spring break. This is our chance to see something different.”

Somehow I really doubt that Gomez’s character’s desire for something different was quite like what she got. You remember Spring Break, right? A week-long vacation from high school or college, time spent somewhere exotic and with a lowered or no drinking age limit and girls with low inhibitions. Now that is the premise for spring break vacation as I know it; Spring Breakers depicts a slightly different view; a view of drugs, guns, and James Franco in cornrows. Spring Breakers reveals the darker side of Spring Breaks where innocence is lost and the idea of inhibitions is a foreign concept. Selena Gomez and Vanessa Hudgens shed their former Disney Channel personas and get down and dirty in Harmony Korine’s wild tale that makes it clear that returning to Disney Channel is definitely not an option (well, at least for one of them).

Faith (Selena Gomez, Wizards of Waverly Place) is tired of the routine of her college life and is in desperate need for an escape. She along with her friends Brit (Ashley Benson, Pretty Lil Liars), Candy (Vanessa Hudgens, Beastly), and Cotty (Rachel Korine, The Fourth Dimension) have been saving all year for Spring Break, and now that it is upon them, they realize their efforts were in vain as they still haven’t earned the amount needed. Faith is a woman of faith (no pun intended); her friends have a reputation at their school for their wild behavior. Unwilling to miss out on Spring Break, Brit and Candy resort to alternative means to get the money for their trip such as robbing a local restaurant.

Their heist is successful, and soon the girls are off to St. Pete, Florida to make memories that will last them a lifetime. Their blissful trip is cut short as the group is soon arrested at a hotel party, but are bailed by Alien (James Franco, Oz the Great and Powerful), a drug dealer/rapper/wannabe gangster.  Alien claims to see something special in the girls and offers to show them the time of their lives. Before long the girls get in over their heads and become tangled up in Alien’s war with his former best friend and rival Archie (Gucci Mane).

I’ve been looking forward to this film since the announcement of the cast; in my defense, who wouldn’t want to see a film where two former Disney kids shed their PG image and be bad. Given Gomez’s high profile, I anticipated that her dip into the deep end of pool wasn’t grand, and she acted more as the moral center of the group. That being said, she fit into her role quite nicely, and it was nice contrast from her troublemaker character on Wizards of Waverly Place. Hudgens was different story entirely; she fully embraced her character’s wild streak and sexuality. Right beside Hudgens was Benson as her partner crime. Both actresses embodied the decadent spirit of their characters as well as the blatant disregard for rules or laws that accompanies the hedonistic lifestyle depicted; you know that their type is nothing but trouble, but their appeal is irresistible. B&H (as they will henceforth be known as to me) onscreen time is guaranteed to stir up the same mixture of emotion in each member of the audience: slight intimidation coupled with extreme attraction.

Franco was no slouch either, providing much of the film’s comedic relief as well as acting as the group’s instigator. My initial intrigue with him in his role was strictly about seeing him in cornrows, but as far as my belief that he could convincingly pulled off the character, I was highly skeptical. I know the exact moment that my opinion changed: during his scene with Gomez where he stroked her face attempting to reassure her while at the same time delivering a thinly veiled sexual allusion. That scene for me showed a menacing quality and changed my perception of the character.

The story had the good fortune of being both entertaining and informative (well, everything except for the end, but we’ll get to that). It was entertaining as it hit all the notes necessary to fill theater seats (with guys, but beside the point); you got an acceptable level of violence, you have plenty of sex appeal, and you have an added bonus: renditions of Britney Spears songs, you’ve got to love it. On to the informative portion, Spring Breakers illuminates a portion of spring break most people never see: how quickly it is that everything can go from wild and crazy to dangerous and deadly; the only hiccup is the ending. Spring Breakers does an excellent job building suspense towards a tragic conclusion and does not deliver. Instead it goes sideways with an ending that I’m not even sure what to make of it. Everyone knows that the big payoff for a movie is the satisfactory conclusion to the story, and with Spring Breakers it was unrealistic and a waste of a good opportunity. Really hope there’s an alternative ending on the DVD.

Jeremy Butler is a film school graduate of the International Academy of Design and Technology. He is been writing for Upcomingdiscs since 2012; however, movies have played a big part of his life for much longer. Favorite genres include horror, science fiction/fantasy, and comedy. Favorite movies are V for Vendetta, Boondocks Saints, Kiss Kiss Bang Bang, and The Godfather.
Admission The Croods