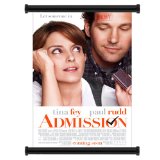 “What’s the secret to getting in…There has to be one, right?”

You will probably never look at Princeton University in quite the same way again after you’ve seen Tina Fey’s latest film, Admission. Under the guise of a poorly-played-out romantic comedy, the film offers us much more comedic insight into the mysterious world of college admissions than it does about relationships. The film was actually based on a novel written by Jean Hanff Korelitz and takes us deep into the labyrinth of how a prestigious college goes about accepting its future students. Of course, it’s a romp and not intended to depict the actual process. Still, there are moments when you have to cringe and wonder to yourself if they don’t just hit too close to home at times. It’s that aspect of Admission that has me quite shocked that Princeton allowed themselves to be used as the college in question here. I guess they figure their reputation can take a tongue-in-cheek hit from Tina Fey. Good for them.

Portia Nathan (Fey) is an admission officer for Princeton University. The head of admissions is Clarence (Shawn) who is about to retire and leave the position to either Portia or her in-office rival Corinne (Reuben). This admissions season will decide who gets the job. Of course, Portia’s situation gets more complicated when she receives a call from John Pressman (Rudd) who runs a new alternative education school in a rural area. We’re talking milking cows and classrooms out in pastures. When she includes the school in her round of visits she’s introduced to unique student Jeremiah (Wolff) whose mind sometimes goes on “walkabout”. He’s not what anyone could call traditional Princeton material, but he’s somehow special. Oh, and he might also be the son she gave up for adoption 18 years earlier.

The revelation sends Portia on a journey of self-discovery. She’s somewhat attracted to Pressman and conflicted about her possible son. She’s also reexamining her relationship with her mother (Tomlin) who was once the feminist revolutionary in her day. Naturally, getting Jeremiah into Princeton will require a miracle, of sorts. Miracles have consequences, and Portia has a serious decision to make.

If you’re a fan of Tina Fey’s Liz Lemon character from 30 Rock, you will probably love Admission. Fey brings many of those characteristics to her role of a Princeton admission officer. She’s capable of many different characterizations, but this one appears to be custom-made for Lemon. Would a lemon by another name still taste as sour? Most of the time she delivers a pretty rock-solid performance. However, there are some real flaws here that can’t be directed at Fey but rather the script and maybe director Paul Weitz.

First of all, as a romantic comedy the film fails on almost every level. If you’re expecting that kind of a film, I promise disappointment. The romance angle appears to be a throw-away plot device that never really matures enough to satisfy that kind of an audience. Most of the time the focus is squarely on Fey as she goes through scenarios that appear to reach at times in their setup. It appears that Weitz comes across an idea, plays it for a time, and abandons it for the next idea. The result is a film that has some truly brilliant moments that are often wasted minutes later when things take another rather unrealistic turn. Her final actions don’t really make a whole lot of sense, and I just didn’t buy the character making those choices, in the end.

The cast is composed of quite competent actors. Here again the film can’t appear to find its direction. Characters appear to be thrown in and out of the plot with little cohesion to the film as a whole. Lily Tomlin turns in a wonderful performance, but the situations always appear forced. Each interaction is fun, in and of itself, but doesn’t really serve the uneven plot. Paul Rudd is doing his best, but the pacing never lets him get going on all cylinders before it moves away to one of these unnecessary side trips. Wallace Shawn is another terrific performer who doesn’t get to shine here. He’s at times the intellectual character that you would expect as head of admissions, while in other scenes he’s played for a buffoon. Again, you can’t blame Shawn. He’s in there giving it his all but was obviously let down by the script or Weitz.

The best performance comes from young Nat Wolff who delivers a wonderfully nuanced performance as Jeremiah. This really is a complicated kid, and Wolff takes us on that journey. There’s a sincerity in his delivery that makes him the one truly believable character in the whole affair.

In the end, this is more a situational comedy than a romantic one. I can actually see it playing as a half-hour sit-com on television than I can as a feature film. There are some clever moments that cry out for that kind of venue. One in particular involves a parade of applicant hopefuls who appear before Portia, in her mind, as she reads over their applications. It’s got sit-com written all over it. So, in a crowded release Friday I’d save this one for the future rental opportunity.  “What’s the secret to getting in? I can’t tell you. You’ll have to find out for yourself.”

Gino Sassani is a member of the Southeastern Film Critic's Association (SEFCA). He is a film and television critic based in Tampa, Florida. He's also the Senior Editor here at Upcomingdiscs. Gino started reviewing films in the early 1990's as a segment of his local television show Focus. He's an award-winning recording artist for Omega Records. Gino is currently working on his 8th album Merchants & Mercenaries. Gino took over Upcomingdiscs Dec 1, 2008. He works out of a home theater he calls The Reel World. Favorite films: The Godfather, The Godfather Part II, The Body Snatcher (Val Lewton film with Karloff and Lugosi, not the pod people film), Unforgiven, Gladiator, The Lion King, Jaws, Son Of Frankenstein, The Good, The Bad And The Ugly, and Monsters, Inc.
Olympus Has Fallen Spring Breakers