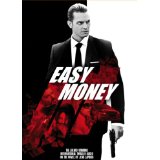 “People will always put themselves and money first.”

What do a yuppie business student, an escaped prisoner, and an enforcer for the Serbian mob have in common? They all want Easy Money, and the lives of these three very different men intersect in very unpredictable ways. Unfortunately, this Swedish crime film from director Daniél Espinosa (Safe House) is hard to follow for reasons that go beyond me not understanding a word they’re saying.

When business student JW (Joel Kinnaman, TV’s The Killing) wants to fit in with the snobby rich kids in his university classes, he realizes his job driving a cab won’t cut it. His solution is to start working for an Arab drug cartel. JW’s first job is to pick up escaped prisoner Jorge (Matias Varela), the cartel’s link to their drug supplier in Germany. Unfortunately for JW and Jorge, Mrado (Dragomir Mrsic) — an enforcer for the Serbian mob — is targeting Jorge. The Serbians aren’t too happy about the Arabs muscling in on their turf. After JW saves Jorge, they must work together to protect their shipment of cocaine from the Serbians while evading the cops.

At least I THINK that’s what Easy Money (Snabba Cash in its original language) is about. As I said before, the movie is incredibly hard to follow, and it’s not just the language barrier. The stories presenting the three men are very disjointed, switching between the three of them without warning. I lost track of the number of times I had to back this movie up to figure out what the heck was going on. Because the script doesn’t focus on any one guy for more than five minutes at a time, I didn’t really get a chance to know these characters and felt absolutely nothing for them as they progressed through the film.

Another contributing factor to the script’s insanity is the subplots for each man’s story. These subplots revolve around the women in their lives: JW’s girlfriend, Jorge’s pregnant sister, and Mrado’s daughter. These scenes mix with the main storyline about as well as oil and water, and are about as useful as a solar-powered flashlight. None of these subplots resolve and they don’t really do anything except give the men a chance to screw up some more. I’m guessing these scenes were put in to show that even violent criminals have normal problems, but all they did was bog down the movie’s already slow pace to a near standstill. I caught myself dozing off during several of these scenes. Easy Money also has flashbacks at odd times (like when switching from one guy’s story to another). There were times when I wasn’t sure if what I was watching was happening now, in the past, or in the character’s imagination. Despite the multiple languages (Swedish, Spanish, English and Serbian), I feel like I could have followed the plot better had there not been as much time-jumping as in an episode of Lost.

I’ve mentioned how much I dislike subtitles in films before, and this movie gives me a chance to explain why. When you’re trying to read subtitles, you’re not watching the actors’ faces. When two men with similar sounding voices are talking, it’s hard to know who is saying what. I was completely lost during the scenes where the cartel was talking about getting the drugs and the Serbians were talking about stealing the drugs.

While the acting wasn’t great, I believe the performers did what they could with this crazy script. It felt at times that they were just as confused as I was. Kinnaman (who takes on the title role in the upcoming RoboCop remake) does play the frantic guy pretty well when everything goes haywire near the end of the film, but he’s the only real standout in this film. Watching Easy Money was like watching a soap opera with the sound muted on your TV. You get that the people you’re watching are sad, happy or angry, but you’re not sure why. With a better script, this movie would’ve been improved by leaps and bounds.

Unless you’re really, really, REALLY into foreign films, this movie isn’t for you. For a “crime drama” it moves at the speed of molasses in winter and isn’t even the fun kind of crazy like Inception. Save your hard-earned cash and pass on Easy Money.