The Devil’s in the Details (Blu-ray)

Posted in: Disc Reviews by Brent Lorentson on April 3rd, 2013 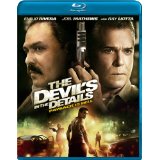 This is a review that I’ve been dreading.  It’s been a while since a movie has gotten me so worked up over its thoughtless execution that I struggle to find something redeeming out of it.  For those unfamiliar with non-linear storytelling, a simple definition would be a story told out of order, for instance Memento or Pulp Fiction.  Those two examples are of films that execute non-linear storytelling and use the structural device as a means to further their story.  As for the filmmakers involved with The Devil’s in the Details, they took a decent story and then tore it up into shreds, tossed it in the air, and pieced it together however they saw fit.

I feel sympathy for the performers here; even though what the actors had to work with was flimsy at best, they still deliver.  Ray Liotta plays Dr. Bruce Michaels, a former Navy Seal who now is a shrink to soldiers coming home from the war.  The performance is subtle and a far cry from the intensity he brought to Narc or his most notable role of Henry Hill in Goodfellas.  For those who are fans of Liotta, at least his performance is worth watching here.

The plot is simple, and if the film followed the simple A-Z path this could have been substantially better.  Thomas Conrad (Joel Mathews) is suffering from PTSD after returning from the war where he had an intense encounter in which a friend and comrade was injured in the process.  Conrad begins to see Dr. Michaels so he can get his life on track; at this point he’s become a drug addict and has lost his family and just about everything else.  These sessions are brief and cut throughout the film, jumping from week 22 to week 4 to another time.  We never get a chance to see if Conrad is getting better or not, which gives us no reason to really root for this guy.

The sessions unfold while in present day Conrad is held captive by these drug dealers who have also kidnapped his wife and child.  Just what is it these kidnappers want?  Well, they need Conrad to convince his family to use their government jobs to the drug dealers’ advantage to not only steal drugs from a rival dealer but also to help get the drugs smuggled into Mexico.  Everything seems to be so convenient; obviously Conrad has been the targeted by the dealers for some time. As the story tries to connect with flashbacks to Conrad in the war, to flashbacks with Conrad around his family before and after rehab, this plot thread is so all-over-the-place, it’s hard to care or follow what happens.

But if you’re reading and still feel, “oh, it doesn’t seem so bad”, allow me to shake you and say it gets worse.  The villain and the henchmen seem to be nothing more than testosterone-filled guys who have watched too many torture films and believe in torturing Conrad, (who is the son of a judge with a brother and sister who work in law enforcement), but the kidnappers hope that at no point in time none of the family members will call the police.  Just a thought: if the family already felt Thomas was a screw-up because of his drug use, and clearly the father is hesitant to help, why didn’t the kidnappers go for a sure thing and simply hold the judge’s wife hostage? After all, the kids would do anything to help their mom.  Oh, perhaps I wasn’t supposed to be thinking while watching this.  After all the therapy sessions with Conrad and Michaels offer nothing to the story with the exception of when Michaels comes to the aid of the family in the final act, but how it unfolds anyone could have done this.

Had this been a story about a soldier’s journey to recovery, it could have been better, but it’s not.  What started off with some promise simply became nauseating with all the jumping around and absurd smuggling scheme.  As standalone moments, these scenes work, but the editing and crafting of this story leaves this film as nothing more than a messy pile of forgettable film.

The Devil’s in the Details is presented in its original aspect ratio of 2.40:1.  The image is arrived at with an AVC MPEG-4 codec at about an average of 27mbps.  The visuals are about standard for a straight-to-video release shot on HD.  Nothing is remarkably good or bad here.  Plenty of detail is captured here, as well as there being nice deep blacks which work well in the scenes where Conrad is being tortured.  The use of the red and a solid cinematographer are what keep this film going visually.

The DTS-HD Master Audio 5.1 isn’t really showcased much here.  The score plays well to help set the tone, but beyond that there wasn’t much to notice.  The dialog was clear and some sound effects were put to use, but there was never a point where I felt the surround unit was being utilized.  If subtlety is what they were going for, then I suppose they nailed it.

Behind the Scenes: (12:05) A very brief look behind the scenes that is filled more with interviews with the cast and producers discussing the project.  Unless for some odd reason this film blows your mind and you just want to know more, I’d skip this.

I’m curious to see what could have been had they re-edited the film and we got to see it in chronological order.  Perhaps it could have been worse, but I can’t see how that’s possible.  To the performers involved, they are not to blame; they showed up and delivered a solid performance all around.   On the bright side, if I ever run out of coasters I can always blow the dust off this release and put it to good use.

Brent Lorentson is a horror writer and film critic based out of Tampa, Florida. With a BA in Digital Film, he co-wrote and co-directed Scavenger Hunt. His short stories have appeared in various horror anthologies. In 2019 his short script Fertile Blood will be a part of the anthology horror film Slumber Party. He is currently working on his first novel A Dark and Secret Place set to be released in late 2019. Favorite Films: Taxi Driver, Fight Club, I Saw the Devil, The Wild Bunch, Dawn of the Dead, A Clockwork Orange, Pulp Fiction, Heathers, The Monster Squad, and High Fidelity.
Tom Green: Live The Frankenstein Theory