Posted in: No Huddle by Jonathan Foster on April 8th, 2013 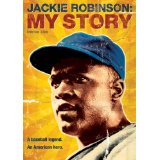 “I’ve always advocated, and I still will advocate until the day I close my eyes and die, that there should be a national holiday honoring Jackie Roosevelt Robinson, so then all people will know who this man is.”

That statement by fellow Brooklyn Dodger Don Newcombe illustrates just how important Jackie Robinson was, not just to baseball, but to professional sports as a whole and the civil rights movement. When Robinson strode onto Ebbets Field in 1947, he shattered a color barrier that had been in place since professional baseball began.

Jackie Robinson: My Story tells the tale of this remarkable athlete. Narrated by Jackie (Stephen Hill, Dead Man Down) himself, this documentary chronicles Robinson’s life from his birth in Cairo, Georgia to his death from diabetes at the age of 53. It doesn’t just highlight his baseball career, but also the events that made him who he was. We get to experience the joy of his first game with the Dodgers — and winning the World Series with them in 1955 — the anger towards bigotry, and the sadness of his son’s untimely death, all through Robinson’s eyes. Using photos and clips, this film gives us a window into a much different time; a time when some men had to fight for basic human rights.

What I like most about Jackie Robinson: My Story is that it didn’t try to sugarcoat anything. While some biographical films tend to only show the good things about a person — or bad things, depending on how history remembers them — this movie shows Robinson’s failings as much as his successes. It mentions his hothead Army days and how he was an absentee father. The absentee father issue was really powerful, especially when Robinson links his absenteeism with his son’s death at the age of 24. This film has a refreshing honesty about it, with Robinson offering no excuses for what he did.

Part of this film’s impact comes from the intimacy of the setting. It’s just the viewer and Robinson in the old Ebbets Field locker room. Stephen Hill not only looks like the late ballplayer, but does an excellent job playing him. He really breathes life into the still photos and the grainy, black and white archived footage. It’s even more impressive when you consider all he has is a bench, a bat and a glove to work with. The way he swings his bat when talking about the World Series or the way he pounds his glove while talking about the Dodgers players who tried to have him kicked off the team really make you feel as if these incidents just happened yesterday, instead of in the 1940s and ‘50s.

This film had a lot of information on Jackie Robinson that I found fascinating. For example, I had no idea Robinson was a multi-sport athlete, playing in the Rose Bowl for UCLA. Other tidbits I found interesting were the fact that his brother ran track in the Olympics, coming in second to the legendary Jesse Owens. That same brother also helped to build the Rose Bowl that Robinson would play in during his senior year in college. I also liked the segment on his friendship with “Pee Wee” Reese, the captain of the Dodgers when Robinson joined the team and his first white friend in pro baseball. While the bulk of the movie was about baseball, it was these little gems of information that helped keep me glued to the screen.

If you love baseball, history — or both — then pick up Jackie Robinson: My Story. Heck, pick it up even if you don’t. I promise you won’t be disappointed.

Down the Shore (Blu-ray) Contest: Win Knuckleball! on DVD From MPI