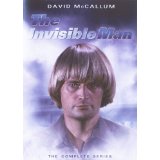 David McCallum has been a vital part of two outstanding television shows in his illustrious career. The Scottish-born actor played the Russian/British secret agent Illya Kuryakin in the spy series The Man From U.N.C.L.E. The series capitalized on the whole James Bond fad that was sweeping television both in England and in the United States in the 1960’s. The series lasted five years and over 100 episodes. In recent years McCallum has added a 10-year run as pathologist Dr. Donald “Ducky” Mallard on the number one scripted show on television: the original NCIS. In between he’s appeared on countless other shows both in England and the States. He appeared in a landmark Outer Limits episode and as a guest on countless films and shows over his 60 year acting career. He even found time to star in less successful shows. One of these was The Invisible Man.

The series was short-lived. It didn’t even last a season. It lasted only 13 episodes, but the show still has many fans with fond memories of the series. McCallum played scientist Dr. Daniel Westin. He and his wife Dr. Kate Westin (Fee) worked for the government-sponsored Klae Corporation. He decided to use himself as a guinea pig for an experiment in invisibility. It worked with only one slight problem: there was no way to return him to normal. So, he had a Derma-plex mask and gloves painted over his skin to create a removable surface when he wanted to become invisible. Of course, the clothes would provide the rest. Klae agreed to fund his research for a cure provided that he and his wife performed “favors” from time to time. These involved missions where his special talent proved useful. They worked under the direction of Walter Carlson (Stevens). They were a bit naive about the spy business, and that inexperience often found them in life-threatening situations which Dan would narrowly escape with his invisibility.

The show relied on the usual gimmicks of items flying on strings that were not always as invisible as Dan was supposed to be. As he moved the camera would take a POV position, and the theme music would play. That solved the issue of having a character that the audience would not be able to see. They made sure he bumped into things from time to time to provide the viewer with another reference as to where he was.

The series was not as bad as one might think. The show runners would go on to become heavy-hitters in the world of television. The creators were none other than Harve Bennett (Wrath Of Khan) and Steven Bochco (Hill Street Blues). Production staff also included the likes of Leslie Stevens (The Outer Limits) and James D. Parriott (Forever Knight). Music was provided by award-winning composer Henry Mancini (The Pink Panther). This was a production dream-team that any network executive would kill to work with today.

David McCallum’s ten years as Ducky is no fluke. This is a chance for fans to see something that just wasn’t around long enough then. McCallum’s Westin character is warm and genuine even under rather absurd conditions. He never falls into the trap of letting his performance become camp. I don’t think he really sees any role as beneath him, and it’s this respect for even this kind of material that makes this a bit of an unburied treasure chest.

If the series had a weak link, it was the performance of Melinda O. Fee as Kate. She came across a bit ditzy for a PhD. The Carlson character took a page right out of Richard Anderson’s Oscar Goldman from The Six Million Dollar Man. He was their friend and boss and not unwilling to use that friendship to get the couple to take on a risky assignment.

The production values are completely dated today. None of this would stand up under current standards, but it only adds to nostalgia element that makes the show worth adding to your collection. The episodes look as good as they’re ever going to look. These discs have the show in the correct full-frame aspect ratio.

It’s rare that a failed series gets a release like this. Props to the folks at Visual Entertainment for giving fans this rare opportunity. You get all 13 episodes on four discs. I know there are plenty of other short-lived shows that still have a following out there. This is how you show support for a company willing to take the gamble. “I knew I could count on you.”

Gino Sassani is a member of the Southeastern Film Critic's Association (SEFCA). He is a film and television critic based in Tampa, Florida. He's also the Senior Editor here at Upcomingdiscs. Gino started reviewing films in the early 1990's as a segment of his local television show Focus. He's an award-winning recording artist for Omega Records. Gino is currently working on his 8th album Merchants & Mercenaries. Gino took over Upcomingdiscs Dec 1, 2008. He works out of a home theater he calls The Reel World. Favorite films: The Godfather, The Godfather Part II, The Body Snatcher (Val Lewton film with Karloff and Lugosi, not the pod people film), Unforgiven, Gladiator, The Lion King, Jaws, Son Of Frankenstein, The Good, The Bad And The Ugly, and Monsters, Inc.
Contest: Win Knuckleball! on DVD From MPI Earth’s Final Hours (Blu-ray)