Posted in: Disc Reviews by Jeremy Butler on April 10th, 2013 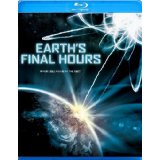 “Why save a few when we can save them all?”

An excellent question; have you ever noticed that in disaster films as soon as an apocalyptic event is discovered, plans go into motion to protect the elite such as the president, his cabinet, and a few select others while the rest of the world is left out in the cold to be lambs to the slaughter? Well, in Earth’s Final Hours, the lambs fight back, working to save the many rather than just the few.

Earth’s Final Hours follows Agent John Streich, a company man from the Department of Defense, though that detail is more of a deduction on my part given that the organization is never directly named. After the Earth is penetrated by matter from a White Hole (the opposite of a black hole, where a black hole would suck in matter, a white hole expels matter), the planet is knocked off its axis, causing the earth to stop its natural rotation. As a result, cosmic radiation storms threaten to destroy the planet. True to form, as soon as news of impending doom is reported plans go into effect to use a now-defunct former government program, codename The Resonator Program. The Resonator Program was the brainchild of Dr. Rothman, a satellite network that when activated creates a man-made magnetic field similar to the one that exists around the earth.

The organization that John works for intends to use the program to construct a safe haven for a select few, a place to be safe while the rest of Earth is fated for destruction. John is conveniently left out of the loop, but luckily his son Andy, who has a tendency to rebel against all authority (federal or parental), learns the truth after hacking the Department of Defense as well as discovering Rothman. Aided by fellow agent and scientist Dr. Chloe Edwards, John seeks out Rothman who as a result of refusing to weaponize the Resonator Program has been imprisoned in a black site facility (a prison encampment that doesn’t officially exist) for over twenty years. Upon rescuing Rothman, he explains a way of using the program to jump-start the Earth back on its original rotation. Now John with the help of his son and Edwards must rush to get the program before the people he works for gets there first.

From first glance I knew that this was a SyFy original movie, which usually means an underdeveloped premise and an actor past their glory days, but Earth’s Final Hours appears to be the exception to the rule. That is not to say that there weren’t some parts that could have used some expansion, such as the relationship between Streich and his son Andy. The reason for the tension is referenced, but not enough time was spent on the family dynamic before the crisis for it to really sink in. Another aspect that the film could have done without was the addition of Julia Maxwell as Andy’s friend/love interest. Maxwell is gorgeous and great to look at, but she serves no real purpose in the overall plot. On the other hand, renegade agent looks good on Robert Knepper, who I’m used to seeing as the villain; it was refreshing to see him switch it up and play a former company man with a penchant for sleeper holds.

The underlying logistics of the story were a bit baffling. Here we have a piece of equipment that looks to be Earth’s salvation from destruction, and the creator explains that it is possible to use the equipment to set things right, and instead the powers that be chose to ignore the scientist. I understand that the government can’t afford to put all their eggs in one basket due the fact that if Rothman is wrong, it would mean the end; however, it just seems that if you are willing to trust an untested piece of equipment to save you, you might as well trust the expertise of said equipment’s creator. The film’s strongest point is possibly the inner turmoil of the lead character: a company man used to toting the company line, and for the first time in his career, he goes against orders and forges his own path.

Earth’s Final Hours is presented in its original aspect ratio of 1.78:1. The 1080p image is arrived with an AVC MPEG-4 codec at an average of 25 mbps. Filmed with 35 mm film, the overall picture quality is very good. Clear and very sharp picture clarity is most notable during the film’s opening scene with large stalks of grass. The picture also provides lots of detail in terms of facial blemish and frown lines of the characters Knepper and Benson.

The special effects quality of the picture was impressive given the fixed budget with the exception of the computer-generated pictures of Earth, which appear extremely animated.

The Dolby TrueHD 5.1 audio mix was impressive. Though it does little in terms of providing an immersive feeling, the entire track is blended together very well. No instances where the film score overpowered the dialog, which remains discernible throughout the films run.

No special features included on this disc.

Possibly one of the better made-for-television movies that I’ve seen, but it is not the type of film that you keep and watch often; once is enough.

Jeremy Butler is a film school graduate of the International Academy of Design and Technology. He is been writing for Upcomingdiscs since 2012; however, movies have played a big part of his life for much longer. Favorite genres include horror, science fiction/fantasy, and comedy. Favorite movies are V for Vendetta, Boondocks Saints, Kiss Kiss Bang Bang, and The Godfather.
The Invisible Man (Complete Series) Willow (Blu-ray)