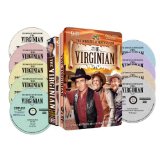 As The Virginian entered its seventh year there were very few changes. Of course, this would be the final year, that could be said. The only new cast member was David Hartman who played David Sutton, a drifter who comes to the notice of The Virginian and hires on at Shiloh. He doesn’t appear in many episodes and is almost completely gone in the last handful of stories, returning only for the final episode of the year. Unfortunately, there was one cast member taking his leave. Clu Gulager would no longer be on the show as Deputy Ryker. Many of the rest of the cast would also leave at the end of the next season.

The best part of the seventh year is that there were far less of the single-character episodes. All but a handful of episodes would feature both Trampas and The Virginian. Even the Granger family would see far more action in this season. That was an added bonus for me. I like watching James Drury and Doug McClure working together, and if you’re like me, this was a very good season indeed.

In case you have no idea what I’m talking about, here’s a recap of the series itself, followed by some highlights of this seventh season.

The series was named after the main character in the series. The Virginian (Drury) had no other name. He was the foreman on the extensive Shiloh Ranch. The ranch took up fully half of the Wyoming territory. The Virginian’s right hand was Trampas (McClure). The ranch was owned by Clay (McIntire) and Holly (Nolan). The two actors were actually husband and wife in real life. They had a niece, Liz (Lane).

Another way this show was different was the ease with which the supporting characters got themselves episodes where they were the focus. There are even episodes where The Virginian himself was either not in the episode or relegated to a cameo, often at the beginning or end. There are another 30 episodes on 10 discs.

There were some very strong episodes to be found in the seventh year:

The Saddle Warmer: This first episode introduces us to David Sutton. He’s a drifter who comes to the aid of a confused girl who keeps running away from home. Ralph Bellamy (The Wolfman) stars as the girl’s father. He ends up at Shiloh after Trampas is injured in an attempt to fight him.

Image Of An Outlaw: Meet Rafe. He keeps getting mistaken for a gunslinger outlaw. When he has to come up with some quick cash to save the spread he’s hoping to buy, he ends up deciding to take advantage of the resemblance and rob a bank. Unfortunately, it attracts the attention of the real outlaw who might want to trade places with Rafe. That means only one of them can stay breathing, but which one?

Vision Of Blindness: Liz is in a stage accident that kills everyone else on the stage. Now she’s in the middle of wild wilderness and she can’t see. A stranger played by John Saxon (Nightmare On Elm Street) reluctantly helps her home. The problem is that he’s looking to kill Trampas for killing his brother during a holdup. Liz becomes dependent on the stranger and falls in love with him.

Last Grave At Sorocco Creek: This is another one of those episodes that shows what an actor James Drury really was here. A friend of The Virginian’s is arrested for a murder that The Virginian knows he didn’t commit because they were together at the time. He’s delayed getting to the town because of a cattle drive. He gets there before the trial, but only to find his friend was lynched. The guilt and rage cause him to go against the town and find the real killer and the person who lynched his friend. It’s one heck of an emotional ride for Drury.

Fox, The Hound And The Widow McCloud: Trampas gets to show off Doug McClure’s acting chops here. Victor Jury returns to play Luke, the old man who helped Trampas break out of jail last season before he could be wrongly hanged. Luke talked of going to Canada and working a spread. Of course, a bounty hunter finds him and follows him all the way to Shiloh, where he seeks out Trampas. It’s a bittersweet story that finds Trampas wanting to help the old man. The two have wonderful chemistry here, and this might well be the best episode of the season. It’s certainly one of the best for the series.

You get another 26 episodes on nine discs and another tin case to hold the plastic one within. The picture quality shows the restoration and looks better than it did when it first aired. Take another trip with The Virginian to Medicine Bow, Wyoming. “It’s a nice town with good decent people.”

Gino Sassani is a member of the Southeastern Film Critic's Association (SEFCA). He is a film and television critic based in Tampa, Florida. He's also the Senior Editor here at Upcomingdiscs. Gino started reviewing films in the early 1990's as a segment of his local television show Focus. He's an award-winning recording artist for Omega Records. Gino is currently working on his 8th album Merchants & Mercenaries. Gino took over Upcomingdiscs Dec 1, 2008. He works out of a home theater he calls The Reel World. Favorite films: The Godfather, The Godfather Part II, The Body Snatcher (Val Lewton film with Karloff and Lugosi, not the pod people film), Unforgiven, Gladiator, The Lion King, Jaws, Son Of Frankenstein, The Good, The Bad And The Ugly, and Monsters, Inc.
Interview with MANBORG Director Steven Kostanski In Search Of… The Complete Series