In Search Of… The Complete Series 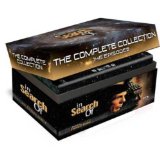 “This series presents information based, in part, in theory and conjecture. The producers’ purpose is to suggest some possible explanations, but not necessarily the only ones to the mysteries we will examine.”

Everybody loves a mystery. I’m not talking about a murder mystery found in a book or movie. I’m talking about the mysteries of life. We’re surrounded by them. Do aliens exist? Have they visited us now or in our ancient past? Can plants communicate? Are some sharks immortal? Is there life after death? How about before birth? Is there really a Fountain of Youth? Do our pets have ESP? There are as many questions as there are stars in the sky. If you’re rather fond of these questions, and who isn’t? (Oops, that was another question.) In Search Of… is just the vintage television show for you. Thanks to the folks at Visual Entertainment you just got your chance. So ask away.

In 1969 Leonard Nimoy thought he was finished with the character Spock. He was tired of the association and even titled his first autobiography “I Am Not Spock”. In later years he recanted and spent several decades in and out of the ears. But as the 1960’s gave way to the 1970’s, he was attempting to put as much distance as he could between himself and the beloved Vulcan. After a brief stint on Star Trek’s Desilu sister-show Mission Impossible, Nimoy returned to television in a unique way with In Search Of.

In the 1970’s there was a rush of documentaries on various unexplained sightings. Everything from UFO’s to Bigfoot became a bit of a sensation. Some of these received box office releases, and the public interest only grew. It was only a matter of time before television would take advantage of the phenomenon on phenomena. Rod Serling would narrate the first features, and Leonard Nimoy took over as host when the show went to a weekly series in 1977. Nimoy might not have been exactly on friendly terms with Mr. Spock, but he brought a lot of the Vulcan’s mannerisms to the program.

Each week the half-hour series would investigate various strange stories. There were the monster shows that looked at Loch Ness, Bigfoot, ghosts, zombies, and even vampires. Of course UFO’s and aliens were common subjects. At times the series looked at more tangible down-to-Earth stories. Such famous crime or disappearance subjects included D.B. Cooper, Eva Braun, Jim Jones, Jesse James and Jimmy Hoffa. Famous ships like the Marie Celeste, Lusitania  and, of course Titanic were covered. Many episodes looked at devil cults and worshippers of various deities. Historical investigations examined pyramids, The Great Wall of China, Pompeii, and Stonehenge.  There were religious mysteries to explore that included John the Baptist, The Ten Commandments, The Shroud Of Turin, and The Great Flood. Scientific areas included cloning, hypnosis, cryogenics and even something called laugh therapy. The occult is covered with such episodes as voodoo, witchcraft, possession, and ESP. Check out episodes that deal with life after death, tidal waves, Sherlock Holmes, The Devil’s Triangle, acupuncture, reincarnation, and even Butch Cassidy.

The episodes would feature some tease by Nimoy followed by an investigation into the subject. This could include interviews with witnesses, written accounts, vintage footage and photographs. Along the way Nimoy would pose questions and the provocative observations. He was always careful not to take sides in the issue, and the episode usually ended with the verdict up to the audience to decide. Nimoy would speak in that stoic Spock tone, and if you closed your eyes you could almost picture the show being hosted by the Enterprise’s science officer.

If there is a flaw to these episodes today, it is that much of the information is now quite dated. There has been progress since the 1970’s on virtually all of these fronts. Some of the show’s evidence has been long since debunked, and new evidence might have taken the story in an entirely new direction. I didn’t realize just how obvious that part of the equation would be. The series offers less of a valid exploration now than it did then.

That is not to say that the series does not still fulfill its original prime directive. The show still entertains. There is still plenty to provoke our interest, and Nimoy’s presence brings it all alive even 30 years later. The picture quality also dates the material; however, when you are dealing with so much documentary footage the image quality becomes so much less important. There’d be no mystery if that Bigfoot footage was sharp and clear, now would there? Most of these topics remain mysteries and are still, at the very least, quite interesting.

The set features every episode from Nimoy’s six-season run on the show. They are packaged in six cases with three discs per season. But that’s not all. On a seventh collection you get the 2002 revival that was inspired by the success of The X-Files and featured that show’s star Mitch Pileggi as host. Instead of Spock you get FBI Assistant Director Skinner to guide you through a season of episodes. Many update shows of the past while offering more subjects better suited for a new millennium. Unfortunately, this revival only lasted the season. You also get the two Rod Serling episodes that started it all. It’s about as complete as you could ask for. All of these standard plastic cases fit snugly in a shelf-friendly box that keeps the entire collection together and at your fingertips.

There’s no way we could talk about all of the fascinating subjects you’ll find in this collection. There’s something here for everyone from the history buff to the conspiracy theorist. Visual Entertainments put it all at your fingertips. Proof that while the original show ended 30 years ago, “We’re still listening“.

Gino Sassani is a member of the Southeastern Film Critic's Association (SEFCA). He is a film and television critic based in Tampa, Florida. He's also the Senior Editor here at Upcomingdiscs. Gino started reviewing films in the early 1990's as a segment of his local television show Focus. He's an award-winning recording artist for Omega Records. Gino is currently working on his 8th album Merchants & Mercenaries. Gino took over Upcomingdiscs Dec 1, 2008. He works out of a home theater he calls The Reel World. Favorite films: The Godfather, The Godfather Part II, The Body Snatcher (Val Lewton film with Karloff and Lugosi, not the pod people film), Unforgiven, Gladiator, The Lion King, Jaws, Son Of Frankenstein, The Good, The Bad And The Ugly, and Monsters, Inc.
The Virginian Season 7 Escapee (Blu-ray)