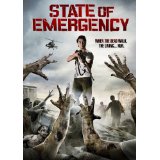 Things needed to survive a zombie apocalypse: a secure location to hole up in, water (lots of water), canned goods, a hatchet, and a high-powered rifle (preferably with a scope). Luckily for Jim, the main character of State of Emergency, all these things just happen to fall into his lap. Produced by the Clay Brothers (Haven’t heard of them? That’s okay, neither have I.), State of Emergency is their second feature film, and though it ultimately shows promise, it could have been better with a few tweaks.

State of Emergency dives right into the story, dropping the audience right into the middle of the crisis. As the film opens, four people barricade themselves in a room; one man braces himself against the door as something tries to force its way inside, then the other man enters the frame. Armed with a rifle, he takes up a defensive position and gives the nod to his partner to move away from the door and let the threat in. Wordlessly and without argument, the man bracing the door steps away and moves behind his rifle-wielding friend. Suspense builds as the two await the door opening, and then boom….the audience is transported three days earlier without discovering what’s behind the door.

Now three days in the past, we are introduced to the rifle-wielding man now identified as Jim as he carries his fiancée, Emile, through a field; she’s bleeding out, and he’s desperately searching for aid. As you can probably figure out, before long Emile is gone and Jim is left all alone. Taking shelter in a nearby horse stable, Jim gathers supplies and locks the place down. Though we do not learn this until well into the story, an explosion at a local chemical plant has released a nerve agent into the atmosphere and affected the population, turning most into mindless zombies. Jim remains at the stable for a time awaiting any news of rescue, but it soon becomes unsecured and he’s attacked. Forced abandoned the stable, Jim takes refuge in an abandoned warehouse where he meets Scott (the other man from the barricaded room), Scott’s wife Julie, and Ix. Now the foursome must work together and want for rescue as the group of zombies outside their doors grows.

Fairly simplistic when it comes to the terms of the plot, the only principal point of the plot being survival, State of Emergency walks along the same lines of 24 Days Later and Dawn of the Dead (the remake with Ving Rhames) without really stepping on the latter film’s toes. The film was an interesting idea in theory; however, certain aspects hamper the film’s execution. Firstly, the reason for the population’s transformation needed to be explained at the film’s opening rather than midway through. Another folly in my opinion was how the mellow the film was overall; everyone was too calm to be trapped in such a tense situation; there was no real sense of panic or cabin fever. As far as the acting goes there was promise on the end of Jay Hayden, the rifle-wielding de facto leader of the foursome. Hayden expertly portrayed the shell-shocked persona of a man whose fiancée died in his arms. The other cast members may have displayed the same promise; however, there simply wasn’t enough screen time to go around.

Jeremy Butler is a film school graduate of the International Academy of Design and Technology. He is been writing for Upcomingdiscs since 2012; however, movies have played a big part of his life for much longer. Favorite genres include horror, science fiction/fantasy, and comedy. Favorite movies are V for Vendetta, Boondocks Saints, Kiss Kiss Bang Bang, and The Godfather.
Escapee (Blu-ray) Pain & Gain