Posted in: Disc Reviews by Jeremy Butler on April 24th, 2013 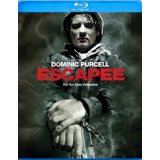 “Now it’s mandatory that you do not make make eye contact until we tell you that it’s all clear.”

Typical, one person can’t follow simple instructions and the rest are doomed to die because of it. Or at least that’s how it starts in Escapee, the new suspense horror film starring Dominic Purcell and Christine Evangelista, or what I like to call it: Halloween with a dash of Friday the 13th. Harsh perhaps, but as I watched the film I could not help but the see the comparisons. It fooled me at first with a fairly interesting opening sequence, but from there, it become painstakingly obvious that the film did nothing but rehash many of the themes that made the previous films famous. It wasn’t until the reveal at the climax of the film that the story felt mildly original.

Escapee opens up five years ago with our killer, Harmon Jaxson (Dominic Purcell, Prison Break) as he has just completed his first murder of his former girlfriend and takes us through an intriguing modus operandi of hanging her upside down from a tree and doing some postmortem defiling of the body (not going to reveal what, have to watch the movie if you want to know). The film then fast forwards to Harmon on the run and eventually being captured by the police.

Afterwards the film jumps five years ahead, bringing it to the present. A group of psychology students are on a field trip to the Parker Mental Institution; among the students is Abby (Christine Evangelista, The Joneses), a sweet and smart young woman who bears a connection to the mental institution. As the tour begins, the guard receives news of a Code Orange, a dangerous patient being transferred. The students are instructed to turn to face the wall and to not make eye contact with the detainee. Naturally the detainee is revealed to be none other than Harmon, and of course as he is passing by Abby does the one thing she is told not to do; she looks at him and to her horror, he looks back. Suddenly, Harmon lunges at her, proclaiming she is his.

Rattled by the experience, Abby immediately returns home and does everything she can to put the experience behind her. That night, Harmon makes his escape from the institution, killing anyone and everyone who crosses his path on his way to his primary target….Abby.

The film had my attention at the beginning with the opening scene, but almost immediately after Harmon’s capture, the film became predictable with minimal surges of originality. Escapee follows the horror thriller guidebook: a smart and innocent girl with promiscuous friends becomes the target of an incarcerated killer; complete with a deadly escape and a mid-coitus death scene. (Do these plot themes sound familiar to anyone?)

Pacing was another one of my issues with the film. It had a good rhythm and was building suspense moderately well; then the plot became weighed down by too many other plot themes forcing it to lose a lot of steam; ten to fifteen minutes could have been easily cut from select scenes through the film to improve it and speed the story along.

Acting-wise, the only person that really impressed me was of course Purcell; his performance as the sadistic killer was what made the film watchable. Evangelista has the right look to be a scream queen but lacks the range; her character was too underdeveloped to be a lead character. As for the rest of the cast, very few of them were truly necessary to the story; several of them could have been cut or downsized and I believe that it would have very little impact on the film as a whole.

Escapee is presented in its original aspect ratio 1.78:1. The 1080p image is arrived at with an AVC MPEG-4 codec. Shot with a Red One camera, the image is crisp with excellent picture clarity. Black levels for the film are good. The cool color palette is very fitting for the film, and the use of blue during the night time sequences is very beneficial to the film’s overall look.

On the downside, the background is extremely overblown and unconvincing during the night scene at the thirty-eight-minute mark. Also the film exudes more of a well-made-student-film vibe rather than a theater-quality film.

The DTS-HD MA 5.1 audio track was a bit of a hit or miss. On the one hand, the score and soundtrack work did on occasion provide an immersive and suspense feel. Overall the audio levels for the film as a whole are low and required cranking of the volume. Also more often than not the soundtrack tended to overpower the action.

The Making of Escapee (14:37): Creators Campion Murphy and Faith Ford discuss how the idea for the story came about, detailing the real life circumstances that influenced the story. Dominic Purcell provides an in-depth profile of his character, Harmon Jaxson.

Escapee Trailer (2:07): Your standard preview intended to build interest in the film; nicely done despite overuse of the lightning effect.

My recommendation: it may be beneficial to watch the making-of featurette before watching the actual movie. Perhaps hearing how the idea of the story came about may influence your overall opinion of the film.

Jeremy Butler is a film school graduate of the International Academy of Design and Technology. He is been writing for Upcomingdiscs since 2012; however, movies have played a big part of his life for much longer. Favorite genres include horror, science fiction/fantasy, and comedy. Favorite movies are V for Vendetta, Boondocks Saints, Kiss Kiss Bang Bang, and The Godfather.
In Search Of… The Complete Series State of Emergency