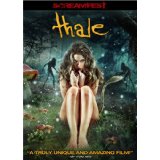 What do you get when you take one over-actor, one under-actor, a mythical creature, and place them in the Norwegian woods? The answer is Thale, the worst thing to come out of Norway since the Viking raids. This is quite possibly the most boring film I’ve ever seen (and I’ve seen Rubber and Southland Tales). Leo and Elvis clean up crime scenes for a living. One day, while cleaning up a scene where a man’s body has been scavenged by animals, they find a hidden doorway to a secret room. In that room, they find a naked girl in a tub hooked up to life support machines and tubes à la The Matrix. Unsure of what to do or how to help her, they soon find out she’s not what she seems, and that different groups want her.

My first problem with this film was the audio. This is one time where I would have preferred subtitles. (There were no subtitles to be had.) The English dubbing over the Norwegian dialogue was worse than a Godzilla flick. Admittedly, I don’t know a thing about dubbing audio, but it’s like the people responsible didn’t even try to match the voices to the actors’ lips. There were times when the audio came on a good half second after the actor stopped speaking. Compounding the bad dubbing was the similarity in the voices for Leo and Elvis, so sometimes the only way to tell who was talking was by the tone of the voice. (Elvis is usually freaked out, while Leo almost always speaks in a stoner’s monotone, but more on that later.) It gets really confusing when Leo and Elvis find the deceased man’s audio tapes, and they start talking over them while the camera is focused on the tape player.

The acting is another problem in this movie. While I can accept Thale’s lack of emotion (she is, after all, not of this world), the two male leads are on the opposite ends of the acting spectrum. Leo is completely blasé the entire movie, maintaining an eerie calm even when Elvis’ life is in danger or while being kidnapped at gunpoint by a secret organization. A raised eyebrow or two is the biggest reaction he gives throughout the entire movie. I’d hate to play poker against this guy. Elvis, on the other hand, has got to be the worst crime scene cleaner ever, puking at the slightest amount of blood and over-reacting to the littlest things, like a bottle falling off a table and breaking. He spends most of the movie either barfing or panicking, sometimes both. I found myself really annoyed by Elvis and rooting for harm to come to him. I was immensely grateful when the end credits rolled and I didn’t have to deal with him any more. Better actors would have improved the film, but not by much.

Still, the biggest problem in Thale wasn’t the voice dubbing or the acting; it was the script. This film goes nowhere and does nothing for roughly 45 minutes after Elvis and Leo find Thale. No real explanation is given as to what type of creature Thale is. She’s a Huldra, by the way, a mythical Norse creature. I found this out only by doing research on this movie on the Internet after I watched it. We also don’t know the reason the organization wants her so badly, or why her supposed rescuer chopped off her tail and didn’t set her free. This movie had an interesting premise, but didn’t take it anywhere.

Thale has no redeeming qualities, unless you count the nice outdoor scenes of the Norwegian mountains. However, pretty scenery cannot make up for bad acting, terrible dubbing and a horrible script. If offered the choice between watching this movie or paint dry, pick the paint. Trust me, the paint will be far more entertaining.