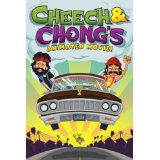 Before Jay & Silent Bob, Harold & Kumar, and Seth Rogen, James Franco and their current band of merry stoners, there was Cheech & Chong. In terms of pot humor, they were the trailblazers who happily blazed on screen and on stage. The comedy duo’s popularity hit its apex with the release of 1978’s Up in Smoke, which became the year’s highest-grossing comedy. Still, Richard “Cheech” Marin and Tommy Chong’s roots were always in music.

They released nine albums in the ‘70s and ‘80s, winning the Grammy for Best Comedy Album in 1973’s “Los Cochinos.” Some of their most famous songs and routines — including “Dave’s Not Here”, “Earache My Eye”, and “Let’s Make a Dope Deal” — have been re-imagined in Cheech and Chong’s Animated Movie!, the new Blu-ray that was released suspiciously close to April 20. (Unfortunately, this year’s 4/20 didn’t fall on a Tuesday, which is the day most home video titles are released.)

It’s not exactly a new idea. Off the top of my head, I know Crank Yankers brought comedic audio clips (in that case, prank phone calls) to life with puppets. More recently, The Ricky Gervais show morphed from a U.K. podcast into an HBO animated series. For Cheech and Chong’s Animated Movie!, directors Branden and Eric Chambers — along with legendary record producer Lou Adler — resurrect the duo’s iconic Pedro De Pacas and Anthony “Man” Stoner personas as the new film’s de-facto main characters. (Adler co-directed Up in Smoke with Chong.) The best thing about this new project is the inventive ways the animation brings these decades-old routines to new life. I mean, how else were we going to see Cheech & Chong blast off for space in a joint-shaped rocket?

The way you feel about the actual humor in Cheech & Chong’s Animated Movie! probably depends on how you feel about the fact that the main connective tissue between each vignette is a body crab named Buster who we first meet living within a red-headed woman’s private parts. Buster gets a whiff of “Man’s” (Chong) distinctive smell and proceeds to follow him and Pedro (Cheech) as they ease from one skit into another. The transitions don’t always work — which is why Buster is here to at least attempt to tie things together — but the skits typically don’t run for much longer than five minutes. So if you’re not enjoying a particular bit, there’s probably a new one coming along very soon. (The movie clocks in at a lean 83 minutes.)

My name is John, and I’m not a stoner; so I freely admit most of the on-the-nose pot humor (“Trippin’ in Court”, “Pedro’s Request”) and the cruder stuff (“Beware of Ralph and Herbie”, which culminates with one dog watching another take a dump on the sidewalk) isn’t really for me. Instead, I preferred stuff with a satirical edge like “Let’s Make a Dope Deal” (two of the three doors have a narc behind them) and “Empire Hancock”, or the “you gotta be smart to play dumb” sensibility behind a classic like “Dave’s Not Here.”

Some of the gags in Animated Movie! are repetitive and inevitably dated — “You drive like Steve McQueen” means nothing to most viewers under the age of 30 — but a surprising amount of the material holds up. The credit for that shouldn’t go solely to marijuana; it should go to these two comedic pioneers in pot and (more importantly) dude humor.

Cheech & Chong’s Animated Movie is presented in an aspect ratio of 1.85:1. The 1080p image is arrived at with an AVC MPEG-4 codec at an average of 27 mbps. Nobody expects this film to rival animated efforts from Pixar or Dreamworks in the technical department. Still, Fox has turned out a characteristically strong Blu-ray image that is bright and pleasing to the eye. The video presentation is sharp, and the bold colors look great. There aren’t very many opportunities to show off depth in this 2D animated film, but I was still pleasantly surprised. The animation — and the humor — may be crude, but the Blu-ray image is anything but.

The DTS-HD Master Audio 5.1 track rarely betrays the fact that the stuff we’re hearing was originally recorded 30 or 40 years ago. (The title character in “Sister Mary Elephant” sounds noticeably muffled and is a rare exception.) Beyond that, the groovy music fills the rears speakers consistently, but sub activity is few and far between. There’s not a ton of overall immersion, but there’s a least one instance of sound traveling nicely from one speaker to another. (A scary siren in “Cruisin’”) Dialogue comes through surprisingly well, considering the main characters are (shall we say) impaired a good portion of the time and their speech is slurred.

Joint (ha!) Commentary by Cheech Marin & Tommy Chong: It’s great to hear the guys together. This commentary is a treasure trove of information for Cheech & Chong fans as they discuss the origins of every bit, rehash stories from live performances and talk about life on the road. They only occasionally seem to be paying attention to what’s happening on screen, but that doesn’t matter too much once they get rolling.

Commentary by the Chamber Brothers & Lou Adler: The directors/co-producers and Adler (also a producer on the film) talk about the project’s origin. Apparently, the brothers approached Adler about this idea five years ago, promising it would only take a short amount of time. The Chamber Bros. reveal they used about 90% of the original recordings and sound effects, but it’s also fun to hear them point out all the nods to Cheech & Chong’s stage show and the five stoner comedies the duo made.

Commentary by Tommy Chong & Paris Chong: Tommy and his son Paris — who jokingly introduces himself as Tommy’s slave — do the honors here. Not surprisingly, Chong repeats some of the same stories from the track with Cheech. Still, this one is worth a listen because he seems more focused here; when he’s with Cheech, he seems to reflexively fall back into his comedy duo shtick. Paris is smart enough to set his dad up and get out of the way.

4.20 Listening Mode: Plays the film with all three commentary tracks, one right after the other, and in the order listed above. The combined running time is, roughly, 4.2(0) hours. Only for the laziest of stoners who don’t want to be bothered with switching from one track to another and love the idea of sitting on a couch for more than four hours.

“Medical Marijuana Blues” Session with Blind Melon Chitlin’: (5:07) Chong plays blind musician Blind Melon Chitlin’ while Cheech takes on the role of his aggressive manager. The bit is ok, but it’s mostly cool because we get to see the guys doing their thing in live action and in the present day. Presented in HD.

Cheech & Chong Slideshow: (3:25) This neat featurette pairs images from the animated movie together with their vintage real-life/on-stage inspiration. The bad news is you can’t fast forward or rewind. The good news is the images move at just the right pace. Still, any sort of music playing over these pictures would’ve been greatly appreciated. Presented in HD.

While they’re not very likely to recapture the same popularity they achieved in their heyday, Cheech & Chong have taken to working together again in recent years following their split in the ’80s.

This Blu-ray is another part of that reconciliation/reunion and a cool title for superfans (They’ve probably heard all the material before, but they’ll appreciate the great commentary tracks.) Personally, I enjoyed seeing (and hearing) these icons together once again more than I enjoyed the actual movie.