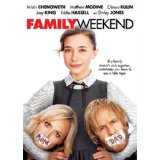 “Some people are lucky enough to find their true passions. That’s okay, because their passion makes them feel like somebody. Sometimes it’s the only thing that keeps them moving. I know some people don’t get mine. My passion is jumping rope…competitively, but I like it.”

Growing up I can remember a desire to tie my parents up; did anyone else share that desire? Don’t get me wrong, this desire was not meant with malicious intent, but to simply grasp the full attention of my parents. Well, for Olyesa Rulin’s character in Family Weekend, that desire is a reality. (Yes, the irony of a movie being considered a reality is not lost on me; just go with it.)

Emily’s (Olyesa Rulin, Greek) home life is not what it used to be; chaos is probably the best word to describe the dynamics that exist among her family; her mother Samantha (Kristin Chenoweth, GCB) is a workaholic who ignores the family in favor of her work, her father Duncan (Matthew Modine, The Dark Knight Rises) is a free-spirited hippie painter with no sense of boundaries especially when it comes to matters of drug use and sex, her older brother Jackson (Eddie Hassell, The Kids Are Alright) is a video artist who pretends to be gay because he believes it makes him more artistic and interesting, and her two younger siblings, Lucy (Joey King, Ramona and Beezus) and Mickey (Robbie Parker, The Young and the Restless), one likes dress up and reenact scenes from popular films, while the other acts as the family record keeper along with his fascination with nature and wildlife.

After her family fails to come watch her compete in the jump rope regional finals, Emily decides she has had enough. Motivated by the desire for her family to come see her compete in the National finals that is a few days away as well as the memory of how her family used to be, Emily takes matters into own hands and drugs her parents. Using various methods, Emily convinces her siblings to assist her in her crusade to reeducate her parents and get her family back on track. It’s not long afterwards that unexpected visitors, an unsanctioned online post, and unintentional assault complicate Emily’s original plans, and she finds herself in a lot of trouble.

This movie deserved a theatrical release; not many films get that endorsement from me, but this is one of them. The cast was incredible; I am primarily referring to the younger members of the cast rather than Modine and Chenoweth, who were excellent, which has become expected of the two veterans. Joey King, who is a veteran in her own right (been acting since the age of four years old) shines as Lucy, and her reenactment of Foster’s iconic role from Taxi Driver displays a wisdom beyond her years. Oleysa Rulin is no newcomer either, with 27 acting credits under her belt, but it is here in this film that she skillfully shows her ability to transition from comedic acting to dramatic acting; this movie will make her a household name.

The chemistry between the cast is almost tangible; the dynamic between Chenoweth and Modine provides some of the most entertaining scenes, but it is their confrontation during the midpoint of the movie that is the most memorable.

Family Weekend is a very family-oriented film; very witty with only few instances of scenes that may not be suitable for children under the age of ten. The principal theme being the importance of family, Family Weekend stays on target throughout its duration, never deviating from its underlying message.

Jeremy Butler is a film school graduate of the International Academy of Design and Technology. He is been writing for Upcomingdiscs since 2012; however, movies have played a big part of his life for much longer. Favorite genres include horror, science fiction/fantasy, and comedy. Favorite movies are V for Vendetta, Boondocks Saints, Kiss Kiss Bang Bang, and The Godfather.
Inhumans If You Really Love Me