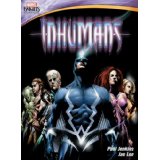 “Imagine if you could never make another sound, not for the rest of your life.”

With those opening words, Marvel Knights Animation draws you into the world of the Inhumans, a race with many different genetic varieties. This 12-episode DVD shares one of the many stories from this unique corner of the Marvel Universe, focusing on the Inhumans’ home of Attilan, an island in the middle of the ocean. Ruled by their king, Black Bolt, they are content to live in their protective dome, blissfully ignoring the outside world. That bliss is shattered during the yearly coming-of-age ritual, when one of the self-imposed genetic transformations goes horribly awry for one of the young people. This sets off a chain of events orchestrated by Black Bolt’s insane brother, Maximus the Mad, who is determined to rule Attilan or see it destroyed.

This DVD is not animated in any sort of typical fashion, like Wreck-it Ralph or The Lion King. It is something different, something gritty and a little rough around the edges. I felt like I was watching a graphic novel. While not the slickest of styles, less is more in this case. It really draws you in, making you focus on the story and letting your imagination fill in the blanks. While this movie could have been animated in the typical cartoon super-hero style, it wouldn’t have been a good fit for the Inhumans. They aren’t the X-Men or the Fantastic Four. They are the less popular kid brother, and this hard style suits them just fine. I honestly feel a brighter, more animated style would have taken away from the seriousness of the story.

The story told in these 12 episodes is quite compelling. The Inhumans’ isolation from the rest of the planet and the variety of genetic transformations provide a rich tapestry of plot lines and characters. The issues raised about how society — even an advanced one like Attilan — treats those who are different are thought-provoking as well as entertaining. While the humans don’t trust the Inhumans because they are different, the Inhumans fear and shun those whose genetic transformations are ugly or not useful. These fears, in turn, influence the politics of both races. While the politics are a bit reminiscent of the Cold War, parallels can still be drawn to what’s going on today (like the UN not being able to agree on anything and madmen with nukes). I really liked that, at several points, the narrator asked, “What would you do if…?” It forced me to reconsider my previous thoughts on Black Bolt’s actions and made me rethink my opinions. I was expecting Inhumans to be a fluff film, but I got so much more than I bargained for.

My one complaint — and this is minor — is that the story was broken up into 12 chapters. The chapters are only about 12 minutes long, so it’s kind of jarring when the credits suddenly start rolling. I felt like I was just getting into the story when I’m bounced back to reality. On the plus side, there are no “Previously on…” recap montages at the beginning of each chapter; the action just takes off. While it would’ve been better as one continuous film, splitting it up doesn’t take too much away from the overall story.

Inhumans is a solid DVD. It has a great look and story, and the violence comes at a minimum; so even young kids can watch it. If you like comics — especially Marvel — be sure to pick this DVD up.