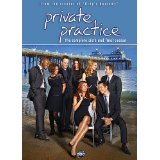 All good things must come to an end, and for the fans of Private Practice the end has come. I’d like to think that the series deserved a little better than the final season provides. Of course, you get pretty much the kind of stories and production you’ve come to expect in six years, but it’s a short season with only 13 episodes and a finale that, I think, might have let the fans down. The finality appears rushed and a bit too plastic and meaningless, something the series itself never was.

Shonda Rhimes had a big hit on her hands with Grey’s Anatomy, so after five years she did what comes naturally in her situation. You spin the success off in the hope that the fans can’t get enough in just one night. At first it appeared to me she had chosen the wrong character to put out on her own. I mean, I never considered Kate Walsh as Addison to be one of the show’s more compelling characters. The show was presented as what the business calls an embedded episode on Grey’s. What that means is that the situation is set up during one of the original show’s episodes. In this case a two-parter called The Other Side Of Life. The idea is that you want to be sure that your existing show’s fans at least watch the pilot in the hope that they will consider it a part of their beloved series. I got to watch that episode when I was called upon to review the fifth season of Grey’s.

Dr. Addison Montgomery (Walsh) is looking for a change. She’s feeling a little burned out in Seattle at Grace Memorial Hospital, where she carries a ton of baggage. She heads down to L.A. to visit a friend who has his own clinic in the sunny city. The clinic practices something called co-op medicine. Specialists from various fields come together to treat their patients in a more holistic manner. Dr. Naomi Bennett (McDonald), specializing in fertility, and her ex-husband Dr. Sam Bennett (Diggs) started the place. Naomi is gone and Jake Reilly (Bratt) has taken over the role of fertility specialist. Dr. Violet Turner (Brennemen) and Dr. Sheldon Wallace (Benben) are the clinic’s shrinks. Dr. Cooper Freedman (Adelstein) is the pediatrician. Dr. Charlotte King (Strickland) is a partner and also chief of surgery at the hospital and Cooper’s wife. Derek’s sister Amelia (Scorsone) has also dropped in as the staff neurologist.

What happened was that a well-cast show won me partly over. I ended up enjoying the episodes more than I expected. I still find all of this musical-beds soap-opera stuff tedious, but I also discovered that Private Practice might actually be about more. OK. It’s not. Still, the show is incredibly well cast, and that has been its saving grace, if you will. It’s almost as if Rhimes put together an all-star baseball team. Almost every member of the cast had been in shows where they were the top character. Kate Walsh might be the least-known member of the cast, at least to the non-Grey’s Anatomy fans out there.

The season appears to be about pregnancy and death. I guess it’s appropriate that the show’s final episodes would be about beginnings and endings. Cooper and Charlotte are not only dealing with Cooper’s newly-found son now. Charlotte’s pregnant with triplets. Cooper’s ecstatic, but Charlotte’s quite out of sorts with the idea. Addison is trying to finalize her adoption of Henry and along the way she hooks up with Jake, which might be the thing that could stand in the way of full motherhood.

The show runners took a lot of chances with this short season. The format changed a bit. The Addison therapy sessions that bookended the previous season’s episodes are gone. There are some witty transition screens for commercial breaks in a couple of the episodes. The big format change is that the season is not linear at all. Several episodes go back to an earlier period in the season and replay those days through the perspective of one of the other characters. Fortunately, for me, the show focused even more on character than it had ever done before. That means the last episodes of the show, excluding the finale are its best work ever.

The biggest change is that Tim Daly left the show the previous season, and Pete was certainly missed throughout the year. Yes, it provided more drama for Violet, but hasn’t she had enough of that? It appears this character has been quite abused by the television fates, and it’s a credit to Amy Brenneman that she pulled it off. Still, my favorite character was always Cooper, and he gets some wonderful stories here. There’s an episode that breaks down the wall and has Cooper talking to us. Think of Bernie Mac without the chair and cigar. It might be my favorite episode ever. Everyone gets to shine, and the set will be a good completion to the show, if you don’t count the last episode.

I can’t explain why I felt so frustrated by the way the series ended. It might have been different had the show been abruptly axed, but it wasn’t. Everyone knew this was the end. And the episode clearly tries to be a finale. The final scene is pretty nice until it’s blown with an obvious device that I won’t ruin for you, if you haven’t yet seen it.

All in all endings are almost always bittersweet. There’s enough of both here. The extras only include a few deleted scenes, bloopers, and a select commentary here and there. It’s a fun watch and after all, good television shows, like “good fries are hard to find“.

Check out some cool clips:

That Will Set You Free

Tell Me What You Said

Gino Sassani is a member of the Southeastern Film Critic's Association (SEFCA). He is a film and television critic based in Tampa, Florida. He's also the Senior Editor here at Upcomingdiscs. Gino started reviewing films in the early 1990's as a segment of his local television show Focus. He's an award-winning recording artist for Omega Records. Gino is currently working on his 8th album Merchants & Mercenaries. Gino took over Upcomingdiscs Dec 1, 2008. He works out of a home theater he calls The Reel World. Favorite films: The Godfather, The Godfather Part II, The Body Snatcher (Val Lewton film with Karloff and Lugosi, not the pod people film), Unforgiven, Gladiator, The Lion King, Jaws, Son Of Frankenstein, The Good, The Bad And The Ugly, and Monsters, Inc.
Broken City (Blu-ray) Star Trek: The Next Generation – Season Three (Blu-ray)