Posted in: Disc Reviews by Brent Lorentson on May 14th, 2013 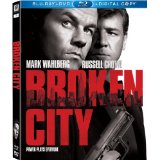 “This is not what you think it is.”

The film opens up with Billy Taggart (Mark Wahlberg) standing over the body of a suspect he’s shot down.  Though the charges are dropped, Taggart is asked to leave the force; this is a decision not taken lightly, but Mayor Hostetler (Russell Crowe) insists the resignation needs to happen for the city, and that he’ll be in debt to Taggart.  Jumping ahead seven years, Taggart is now a private eye and is in debt.  Financially, things are not looking good for Billy, until he gets a call from the mayor’s office.

Hostetler views himself as a savior to the city; sure, he’s probably done many great things for New York, but from the very beginning we have reason to doubt his actions.  With the election only days away he asks Taggart to follow his wife, Cathleen (Catherine Zeta-Jones) and discover who she is sleeping with, and when Billy gets “the proof” Hostetler needs he’ll receive the second half of his $50,000 payment.

Everything appears to be open and shut, but this is only just the beginning for Taggart, as he finds himself involved with a murder that he feels he is responsible for.  The police commissioner Fairbanks, (Jeffrey Wright) seems to be friends with both of the candidates.  Is he playing it safe, or does he have an agenda of his own?  When Fairbanks discovers Taggart at the crime scene, he can’t help but wonder about the possibility of the mayor being involved.

Broken City is presented in its original aspect ratio of 2.40:1. The 1080p image is arrived at with an AVC MPEG-4 codec at an average 35 mbps. The image presentation has an old film noir aspect to it. While it is in color, most colors are muted. Very little that is bright is allowed to intrude on the landscape. Much of the film plays out in shadows. Thanks to superior black levels we’re able to distinguish the action in this shadowy world. Textures are all pretty gritty. The film isn’t even particularly sharp, with plenty of soft-focus moments. Again, this is an intentional style presentation that looks very much like a period piece, but set in contemporary times. That doesn’t mean that detail suffers at all. The picture is clean and presents exactly the atmosphere that is intended here.

The DTS-HD Master Audio 5.1 is really there to serve the dialog. Don’t expect a very aggressive mix here. Realism is the key word here. The score is quite minimalistic. The sounds of the city are the backdrop here and provide a better score than any composer could provide. If you listen you can pick out all sorts of city sounds that join together to provide quite a symphony. The dialog is crisp and clear, and sound placement is very immersive, indeed.

Deleted Scenes: (8:35) There are six scenes with an optional play-all feature. Most of this stuff is filler and belongs on the cutting-room floor. There is an alternate ending which isn’t. Consider it more an unnecessary tack-on that only shows us the obvious.

Putting It All Together: (34:59) This behind-the-scenes feature can be viewed in seven parts or all together. It’s the typical stuff here with cast and crew providing input on the story, cast, style, and production design. The young writer is quite informative, and it leaves you in anticipation for what he does next.

Director Allen Hughes, one half of the Hughes brothers that brought us Menace 2 Society and From Hell, stepped up and delivered a solid film here.  With so much going on with the plot and so many diverse characters throughout, this easily could have turned into a mess.  My biggest complaint remains that I wish more time was put into fleshing out these characters and the side stories more, or simply eliminate certain plot threads.  Over all, though, Broken City delivers a nice modern noir tale that kept me entertained throughout.

Brent Lorentson is a horror writer and film critic based out of Tampa, Florida. With a BA in Digital Film, he co-wrote and co-directed Scavenger Hunt. His short stories have appeared in various horror anthologies. In 2019 his short script Fertile Blood will be a part of the anthology horror film Slumber Party. He is currently working on his first novel A Dark and Secret Place set to be released in late 2019. Favorite Films: Taxi Driver, Fight Club, I Saw the Devil, The Wild Bunch, Dawn of the Dead, A Clockwork Orange, Pulp Fiction, Heathers, The Monster Squad, and High Fidelity.
Liz & Dick Private Practice: The Complete Sixth Season