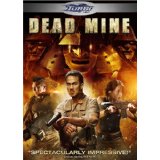 Ever notice when an actor is having a good year, suddenly a film that they made years before their success makes an appearance? I refer to this movie as “the bandwagon film.” It is film that is shelved and does not have a prayer of being released. It happens too often for it to be coincidence and usually features said actor center stage on the cover art with the mention of the popular film that the actor took part in. Take Christian Bale for example: not long after the release of Batman Begins, a low-level film by the name of Harsh Times came to theaters. In the case of Dead Mine, that actor would be Joe Taslim. Taslim is having a good year with a starring role in the action packed The Raid: Redemption and scoring a bad guy role in Fast & Furious 6; the movie had promise in the beginning, but as the film progressed it launched into complete insanity and will likely be an anchor holding Taslim down.

Legend tells of an abandoned Japanese World War II bunker hidden in the Indonesian jungle that stores a vast fortune of Yamashita gold. After an excavation turns up the bunker’s location, rich boy Warren Price (Les Loveday, Sweeney Todd), Rie (Miki Mizuno, The Flying Publicist), a wide-eyed researcher, and Stanley (Sam Hazeldine, The Raven), an engineer from his father’s company. Given the uneasy and dangerous circumstance of the area, the group is appointed a security team led by Captain Tino Prawa (Ario Bayu, Java Heat).

While investigating the structural integrity of the bunker entrance, the group is attacked by an insurgent group and forced into the bunker and sealed inside. As the team searches for another exit, they discover there is more to the site than they originally believed: it wasn’t simply a treasure depot but a covert research facility where the Japanese experimented on POWs. The group realizes right away that they are not alone in bunker as something begins to target the group one by one, giving them the fight of their lives.

The opening credits say this film was a HBO feature film; however it felt more like a SyFy channel made-for-TV movie. The movie had me at first; I honestly thought that it had potential, but it ultimately proved to be disappointing. Dead Mine’s fatal mistake was that it took a straightforward premise and complicated it by trying to go too big. Without going into too much detail, when the antagonists were introduced I was willing to accept them however likely the scenario was, but then towards the film’s climax, the story went left-field and lost me.

Another error would be when the film introduced backstories for several of the main characters. Though it may have given a better understanding of the characters it took away from the film’s original storyline; heavy on backstories but light on the details of the bunkers and the experiments that were performed.

The cover art of the film boasts a non-stop action thriller, but the film was very tame; I can count on one hand the number of action sequences that took place in Dead Mine. Taslim is not exactly the main character that the cover art makes him out to be, which is fitting given that Dead Mine is not the action film that it is made out to be.

Jeremy Butler is a film school graduate of the International Academy of Design and Technology. He is been writing for Upcomingdiscs since 2012; however, movies have played a big part of his life for much longer. Favorite genres include horror, science fiction/fantasy, and comedy. Favorite movies are V for Vendetta, Boondocks Saints, Kiss Kiss Bang Bang, and The Godfather.
The Purge Garbage: One Mile High…Live (Blu-ray)