Posted in: Disc Reviews by Brent Lorentson on June 7th, 2013 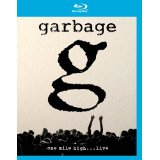 With most of my teen years spent during the 90’s it’s no surprise that still many of the bands I grew up with manage to remain on my playlist.  Garbage is a band of the 90’s you couldn’t help but take notice of because though the airwaves were saturated with alternative music, Garbage was doing it with a female vocalist.  Shirley Manson wasn’t just a pretty face; she had the vocals and stage presence that was hard to resist at the time.  “I’m only happy when it rains” as well as “Stupid Girl” have been tracks that any time I catch them on the radio I can’t help but crank the radio a little louder and get a little nostalgic to the way things were in my teens.

Though Manson and the band managed to reach the status of performing the opening theme song for the Bond film The World is Not Enough, the band seemed to gracefully step out of the spotlight.  With the chance to check out this Blu-ray I was more than happy to take this and indulge myself a bit.  Now that I’ve had the chance to see it, well, my only regret is that I didn’t have the chance to see them in their prime.

Performing in a smaller arena with a modest stage setup I wasn’t surprised that the band took a more simplistic route and focused on the performance over theatrics. With Eric Avery (NIN, Janes Addiction) filling in on bass guitar the band sounds great as they work through the first few songs.  It’s not till they get to “I’m only happy when it rains” that I found myself getting engaged in the performance.  From the start of this track they take a more somber approach and gradually get more upbeat, it’s a different take on a song I love and I really dug it.  How I responded to this interpretation to the song is somewhat how I responded to the performance over all.  This isn’t the band I loved in the 90’s; this is something different, but I still enjoy what I’m hearing.

During one of the better portions while performing “Cherry lips” Manson manages to help security point out a fight but not once does she miss a beat.  This is something clearly she’s gotten used to over the years.  Delivering a concert that is a bit over 90 minutes we get a nice mix between the old and the new.  I was disappointed she didn’t perform the Bond song, but overall I enjoyed what I saw.

With a new album out I’m curious to see where this leads the band.  Considering they’ve been filling the airwaves for nearly 20 years, that says a lot about their sustainability, and if they can continue to evolve with their audience I believe they can continue their success.

Why Do You Love Me

Hammering In My Head

Only Happy When It Rains

The Trick Is To Keep Breathing

Garbage: One Mile High Live is presented in an aspect ratio of 1.78:1.  The 1080i image is arrived at with an AVC MPEG-4 averaging at 30 mbps.  When it comes to filming concerts I believe film is completely thing of the past, and there will be no looking back.  The HD here looks so crisp that on a large enough screen you could believe you were in the auditorium.  With the exception of times when stage lighting seems to cause a bit of posterization, but it’s nothing that is too distracting.  The black levels are quite nice allowing plenty of depth; instead of the audience becoming a simple background blur we see distinction and separation.  On a visual level this is as close as it gets to being there.

The DTS HD Master Audio 5.1 track is what we’ve come to expect with our Blu-ray surround mixes.  The separation is fine and everyone is clear, but my issue came on the performance end with the decision to use filters and other audio tricks to manipulate Shirley Manson’s voice.  Live in the arena I’m sure this sounded better, but on this track is seemed to muffle and distort her vocals to the point I couldn’t be sure what she was singing.  Normally I wouldn’t nag about this so much, but growing up I was always a fan of her voice, and it’s definitely not up to par here.  The guitars and bass sound great here, and for the most part it is an excellent audio experience.

Pre-Show Warm Up: (1:01) A brief look at the band as they ham it up for the camera before going on stage to perform.

Featurettes: (Approx 10 minutes) Why they didn’t bother just editing the five segments together makes no sense to me.  But here the band discusses fivenew tracks from the new album, ”Automatic Systematic Habit”, “Battle In Me”, “Big Bright World”, “Blood For Poppies”, and “Control”.  With each song they mention the band throws a little anecdote behind the making of the song and manages to fit in how great they think it is.

Though this may not be my favorite concert I’ve ever seen, the quality is about as good as it gets.  Garbage will always be a favorite of mine, and for fans of the band I think you’ll enjoy this, but as I mentioned above, this isn’t the band we grew to love in the 90’s.  I suppose time will tell if they will continue to endure or simply fade away.

Brent Lorentson is a horror writer and film critic based out of Tampa, Florida. With a BA in Digital Film, he co-wrote and co-directed Scavenger Hunt. His short stories have appeared in various horror anthologies. In 2019 his short script Fertile Blood will be a part of the anthology horror film Slumber Party. He is currently working on his first novel A Dark and Secret Place set to be released in late 2019. Favorite Films: Taxi Driver, Fight Club, I Saw the Devil, The Wild Bunch, Dawn of the Dead, A Clockwork Orange, Pulp Fiction, Heathers, The Monster Squad, and High Fidelity.
Dead Mine Perception: The Complete First Season