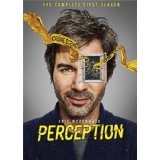 Television has been around for about 75 years now. In that time we’ve seen just about every kind of show you might like. Fads and trends come and go along with stars and characters. Crime dramas have been among the most popular throughout those 75 years, and there have been so many “cop/detective” shows that we’ve also seen just about every kind of crime and investigation possible. With few exceptions there isn’t much that can surprise us in the cop procedural drama.

There are a number of ways that you can attempt to make your cop show stand out from the rest. You can attempt to shock the audience with gory/graphic or otherwise disturbing crimes and images. This usually involves a special squad like you find in shows like Bones or the CSI franchise. It is the cases themselves that take that twisted turn and allow the series to stand out. The other way you can set yourself apart is by creating a “quirky” investigator who has personality trait that distinguishes him from the usual cop. These characters are usually socially awkward, and their quirks are often more of the focus than the cases themselves. It doesn’t hurt if the detective is suffering from some kind of mental disorder. In that category you’ll find shows like Monk and The Mentalist. Perception certainly fits in that mold.

Enter Professor Daniel Pierce (McCormack), a specialist in the mind. He teaches at a prestigious university under the direction of Dean Paul Haley (Burton). He’s also suffering from paranoid schizophrenia. To put it bluntly, Daniel sees and interacts with people who are not really there. He attempts to deal with his problems by immersing himself in classical music and puzzles. The idea here is that he’s so smart that he needs to keep his mind occupied as much as possible to keep it from inventing its own diversions. He’s also scary smart. He works with the FBI through his former student turned FBI agent Kate Moretti (Cook). His condition can be a barrier to his investigations, because it can muddle his connection with reality. More often these hallucinations allow him to work through problems. Essentially he already knows the answer, but these imaginary characters allow him a process to access that information. He’s also quite a genius at interpreting patterns and small details. The job of keeping him on track with his teaching and detective work falls to graduate assistant Max Lewicki (Smith). Whatever he gets paid…it’s not enough.

The cases aren’t really anything to write home about. It could be the mysterious murder of a research scientist or the return of a long-dormant serial killer. In one episode we get the typical case of a genius criminal basically daring Daniel to catch him. It’s a standard-issue episode in this kind of a series. Each episode usually opens with Daniel in his classroom where he’s making a point that will be coincidentally applicable to the upcoming case. The episodes usually end with another classroom scene that basically works as a nice epilogue to the case.

The real reason for watching is Eric McCormack’s outstanding performance in the show. The only way these quirky characters work is with perfect casting and tremendous talent from the lead. McCormack proves that he’s quite the dramatic actor here and makes you completely forget his Will character from the sit-com Will & Grace. He delivers a wonderful level of nuance to Daniel that makes him more than just crazy and brilliant. It’s a performance that rivals Russell Crowe’s similar character from A Beautiful Mind. McCormack sells the condition completely without it ever looking like a cheap gimmick or put-on. The sell job is so good that we are usually left having to guess at which encounters are real and which are not. Credit the show runners for not resorting to some trick to separate the two worlds. It’s best for us if we have to stay on our toes and try to figure it out for ourselves. But even that is not the sum total of this performance. McCormack is even better during those lucid moments when he’s confronting the realities of his condition. It all leads to a pretty nice two-part season finale where he comes to the conclusion that he needs to be hospitalized.

The support cast is fine, but it’s hard not to be swallowed up in McCormack’s own world. The cast includes Star Trek’s Levar Burton who has spent most of his post-Trek years behind the camera as a rather prolific director. It’s a small part that Burton manages to add some swagger to. Rachael Leigh Cook isn’t really a strong performer here, but I’m not sure you can really lay the blame at a lack of skill or effort. I think she finds herself in a situation where she’s unsure exactly how to act…or react … to McCormack. The result is she often appears a little shaky and lacking in confidence. Another standout, however, is the underused Arjay Smith as Max. He has the best chemistry with McCormack, and I get the idea that the two are having a blast working together. When I say underused, it’s not to say he’s not prominent in the show. I just look forward to more of their interactions. They both play the relationship like there is so much more just under the surface. I hope the writers decide to bring some of that out. There’s an almost reverse father and son thing going on that might just be the result of the two actors’ choices.

There are only two down-sides to this release. There are only 10 episodes and no extras. TNT has a winner here, and it would be nice to see the next release built up a bit. It’s the kind of show I would have expected to see on USA a few years ago. The show certainly has a very light/humorous touch to it, but like even sit-coms in the vein of M*A*S*H, the show isn’t afraid to introduce harsh reality, “and sometimes reality’s not so bad”.

Gino Sassani is a member of the Southeastern Film Critic's Association (SEFCA). He is a film and television critic based in Tampa, Florida. He's also the Senior Editor here at Upcomingdiscs. Gino started reviewing films in the early 1990's as a segment of his local television show Focus. He's an award-winning recording artist for Omega Records. Gino is currently working on his 8th album Merchants & Mercenaries. Gino took over Upcomingdiscs Dec 1, 2008. He works out of a home theater he calls The Reel World. Favorite films: The Godfather, The Godfather Part II, The Body Snatcher (Val Lewton film with Karloff and Lugosi, not the pod people film), Unforgiven, Gladiator, The Lion King, Jaws, Son Of Frankenstein, The Good, The Bad And The Ugly, and Monsters, Inc.
Garbage: One Mile High…Live (Blu-ray) Perry Mason: Season 9, Volume 1