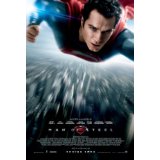 It’s appropriate that exactly 75 years ago this very month Superman was born at the hands of Jerry Siegel and Joe Shuster. He was born to be the patriotic hero symbol for a nation on the brink of a devastating world war. The war came and went as many others would since the hero’s inception. Styles would change. Technology would come and go. Superman would find himself invading each and every medium that has come along since. Television shows, cartoons, comics, novels and even previous films have all continued the ongoing adventures of the man from Krypton. In those years styles have changed so much that the symbols of the hero himself have become quite dated. But in any time there will always be a need for larger than life heroes. They don’t come any larger than Superman, The Man Of Steel. Can he be as relevant today as he was in 1938?

“You will give the people an ideal to strive towards. They will race behind you, they will stumble, they will fall. But in time, they will join you in the sun. In time, you will help them accomplish wonders.”

Judging by the sales at comic book conventions and auctions on places like eBay, Superman has never been bigger. Action Comics # 1 is the most valuable comic book you can find if it’s in nice condition. Warner is banking on that profitability like never before. Feeling left a bit in the dust by Marvel’s Avengers and solid series of comic film heroes DC finds themselves in need of a break-out hit. While Christopher Nolan’s Dark Knight films have done very well, the same can not be said for the rest of DC’s recent attempts at comic films. Last year’s Green Lantern was a box office flop. A Wonder Woman series failed to crack the last fall television schedule, and the team passed on the chance to have Joss Whedon lead that effort. DC is trying to play catch-up, and this summer’s mega-budget Man Of Steel could be the make-or-break link toward a Justice League film and a chance to play in Marvel’s sandbox. So Warner hired Zack Snyder to direct and hedged their bets a bit by bringing Christopher Nolan on board to basically supervise as producer. The result?

Man Of Steel begins at the beginning. Once again, we’re given an origin story. Krypton is about to be destroyed and Jor-El (Crowe) and Lara (Zurer) are about to do something forbidden. They have a natural child instead of going through the pre-determined next genetic sequence route. To protect him from an exploding planet, they send him off to Earth, where his molecular structure will give him the powers of a god among the humans. Before the planet can go down screaming, General Zod (Shannon) busts into the council chamber to take control of Krypton’s genetic lines. Of course, there’s little point; as Jor-El points out, he is the leader of nothing. That doesn’t stop the authorities from putting Zod and his gang into a stasis ship and sentencing him to the feared Phantom Zone, a punishment which lasts like six seconds because the breakup of Krypton opens up the Phantom Zone and frees Zod and his ship filled with minions.

On Earth Kal-El or Clark Kent (Cavill) is trying to find his place in the world. He’s trying to find out more about who he is. He drifts from town to town, job to job until he inevitably reveals his powers by coming to someone’s aid. Along the way there are flashbacks to his childhood and Earth parents Jonathan (Costner) and Martha Kent (Lane). When he saves the life of reporter Lois Lane (Adams) inside an ancient Kryptonian scout ship, she begins to track him down. Just as she’s about to lower the boom on Clark, an alien craft enters Earth orbit demanding that we give up one of her citizens. Of course, the ship is Zod’s, and the wanted man is Superman. Zod wants to create a new Krypton on Earth, and that won’t end so well for the folks already living here. As one character correctly points out, “There won’t be an us”. Superman must stop the plan and along the way prove to the military led by Colonel Hardy (Meloni) that he’s really on their side. The end result is a whole lot of carnage.

I managed to catch screenings in both 2D and 3D. I must say that there is little difference. Man Of Steel fails to capitalize on some truly prime visuals and delivers one of the flattest 3D presentations I have seen in a while. Of course, the good news here is that you can save the premium and see it in 2D and not really miss that much. The missed 3D opportunity does not mean that there aren’t some absolutely impressive visuals here.

I’m still a huge fan of the Richard Donner film and still like it far better than I did Man Of Steel. That film managed to have a level of heart that I seriously found missing in this movie. The characters don’t interact on the kind of level that promotes chemistry. And while many consider the Donner film a bit too campy, Man Of Steel goes too far in the opposite direction. Outside of a William Katt moment as Superman tests his flight skills, there is no humor in this film at all. It never lets up on the tension and seriousness, and that’s a huge mistake, in my humble opinion. By the time we get to the climax, it’s easy to feel overwhelmed as we watch what a colleague correctly described as “CG puppets fighting”. Superheroes are a huge suspension of belief and run the risk of getting too intense and thus putting undue pressure on that effort. What the Marvel films do best of all is treading that balance of action and humor. It doesn’t need to be camp. In The Avengers the humor can be found within the characters and their relationships. Snyder doesn’t develop these relationships enough to allow for that possibility. The focus on Superman is so narrow that Snyder has forgotten the equally important Clark Kent. At some point in the film Clark isn’t really anything more than a cameo. Yes, he ends the film setting up the traditional roles and relationships, but when I spend 20 bucks to see a movie I require more than the promise of a really good time next time.

Henry Cavill does a pretty solid job of playing Superman. He has the strength and the iconic poses down. I’m not too hopeful of his future Clark Kent. That remains to be seen. The film is stolen by Michael Shannon who dominates as General Zod. He delivers a lot just with a stare. I must admit to being a bit reluctant about the casting. I’m happy to have been proven wrong here. Amy Adams is fine as Lois Lane, but she doesn’t have any chemistry with anyone else in the cast. Lois is best here when she’s a lone wolf. It’s a different kind of Lois Lane. Laurence Fishburne is absolutely great as Perry White, when he gets the chance to show it. Unfortunately, Perry has very little to do. Most of his scenes are relegated to delivering serious looks in reaction to the destruction going on around him. Of all of the characters it is Fishburne’s Perry White I have the most hope for in future movies. Law & Order: SVU’s Christopher Meloni does a solid job as Colonel Hardy. Finally, a nod must be given to Russell Crowe who delivers the most action-packed Jor-El ever. Who knew that Superman’s daddy was really Maximus? He kicks butt in the short time he has the screen. This is not a Brando-style attempt at a powerhouse image and little more than voice-overs throughout.

There is little question that Marvel’s success hangs heavy over this film. No where is that more evident than it is in the half-hour climax. The movie does everything it can to out-Avenger The Avengers. The carnage gets exhausting and borders on the ridiculous. Once it’s over we’re not really sure Superman saved anything. Metropolis is in complete ruin. This thing looks like the end of a disaster movie, not a superhero film. Superman and Zod bounce through one building and into another, toppling skyscrapers as they go along. It’s obvious even the characters are mostly computer-generated here. In The Avengers there was banter and movement from one hero to another. That can’t happen here, and it’s obvious that everyone involved missed the point entirely on why The Avengers worked. It’s not just bringing up the carnage totals.

Man Of Steel has already broken a record I find a tad disturbing. The studio has recouped $170 million of its production budget on product placement and product tie-ins. Since the trailer I’ve heard people ask how Superman shaves his beard. Gillette has paid a fortune to be able to answer that question for you. There are extremely obvious product placement scenes that do distract. Lois Lane uses a Nikon camera. In case you didn’t know that they’ve dedicated several extreme close-ups on the logo. Places like Sears and IHOP get plenty of attention, as well. Look. I understand that it is part of the business. It would have been nice if Snyder and Warner would have looked up the word “subtle”.

The film is certainly entertaining. If you’re tied too closely to the comic mythology, you’re going to have fits. I’m okay with most of the rewriting of Superman history. Hell…Smallville really played with the continuity, and look how beloved that show has become. The two hours and twenty minutes moves quickly and you’ll feel like you got some bang for your buck. Emotions are going to get raised on many fronts, and there will be harsh words for Man Of Steel, and I’m sure more than a few harsh words for my assessment. That’s okay, “I get writer’s block if I’m not wearing a flack jacket.”

Gino Sassani is a member of the Southeastern Film Critic's Association (SEFCA). He is a film and television critic based in Tampa, Florida. He's also the Senior Editor here at Upcomingdiscs. Gino started reviewing films in the early 1990's as a segment of his local television show Focus. He's an award-winning recording artist for Omega Records. Gino is currently working on his 8th album Merchants & Mercenaries. Gino took over Upcomingdiscs Dec 1, 2008. He works out of a home theater he calls The Reel World. Favorite films: The Godfather, The Godfather Part II, The Body Snatcher (Val Lewton film with Karloff and Lugosi, not the pod people film), Unforgiven, Gladiator, The Lion King, Jaws, Son Of Frankenstein, The Good, The Bad And The Ugly, and Monsters, Inc.
A Good Day to Die Hard (Blu-ray) Happy Father’s Day From John McClane