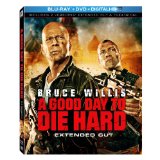 You know, it sure ain’t easy taking care of our kids these days. Everywhere you turn there’s a Russian mobster trying to kill you, or another dirtbag throwing a terrorist party. And guess who’s always around when it’s time to open up the presents? That’s right. It’s me. At least the kid has decided to get into the family business: Killing Scumbags. Being a father means having to give up your vacation once in a while. Yippee Ki Yah, Happy Father’s Day from John McClane. 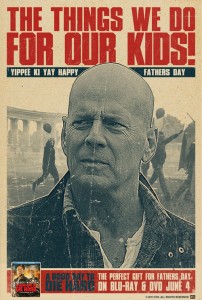 Gino Sassani is a member of the Southeastern Film Critic's Association (SEFCA). He is a film and television critic based in Tampa, Florida. He's also the Senior Editor here at Upcomingdiscs. Gino started reviewing films in the early 1990's as a segment of his local television show Focus. He's an award-winning recording artist for Omega Records. Gino is currently working on his 8th album Merchants & Mercenaries. Gino took over Upcomingdiscs Dec 1, 2008. He works out of a home theater he calls The Reel World. Favorite films: The Godfather, The Godfather Part II, The Body Snatcher (Val Lewton film with Karloff and Lugosi, not the pod people film), Unforgiven, Gladiator, The Lion King, Jaws, Son Of Frankenstein, The Good, The Bad And The Ugly, and Monsters, Inc.
Man of Steel Contest: Oz the Great and Powerful From Walt DIsney Studios

….to HD or not HD that is the question!