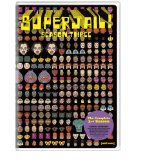 Cartoons are for kids. Most of the time. Then there is Adult Swim on the Cartoon Network. Adult Swim plays during the late night hours and is under much looser federal regulation. Much, much looser, I would say. In fact, it may be possible that the definition of the term loose has been stomped and squashed into a giant red stain on the sidewalk. I have not spent a lot of time watching Adult Swim, but I was not ready for the content of Superjail: Season 3. I think it would be hard to imagine something more offensive and shocking, but I’m sure it exists. Since it is a cartoon there are no limits in the ability to depict horrific gore and bodily destruction. This is a comedy show presented in the new format of compact 11-minute segments. I will say that I didn’t see anything pornographic (at least that wasn’t blacked out), but other than that there seem to be no limits in the hunt for  the ultimate hilarious gross out.

Superjail takes place in a maximum security prison in some post-apocalyptic future. Mutants, freaks and unwholesome abominations abound. Any kind of social norm has been eradicated in this nightmare vision of the future. I’m not saying I’m shocked or offended, but I feel it is my duty to say that millions will be insanely upset and some will be greatly entertained. If you buy into the premise, I would say it’s lots of fun. But I think late night Cartoon Network is no place for kids.

It’s not like network TV hasn’t subjected us to the somewhat offensive Family Guy and its spinoffs, but even that show doesn’t come close to breaking taboos like Superjail does. I’m finding it hard to fully express myself about this experience without bleeping expletives. I am actually somewhat titillated by the extremeness of the show. It’s like Beavis and Butthead and Ren and Stimpy and Itchy and Scratchy (an inspiration to the creators) were left in a toxic waste dump to mature and then committed a series of violent crimes and were incarcerated. My favorite character is probably Alice, the muscle-bound prison guard. Extremeness is the point of the show which fits into the extreme sports/extreme video game culture we live in. Superjail frequently looks like a video game, but one in which the carnage has been multiplied many times over. There is more violence in one 11-minute episode than in ten hardcore horror flicks.

So who are the fine people responsible for the madness? The name that jumps out at me is David Wain (the writer/director of films Hot Wet American Summer, Role Models and Wanderlust) as the voice of the warden. It should also be noted that Wain has written at least 25 episodes of another fairly crazy Adult Swim comedy, Children’s Hospital.

Augenblick Studios is the creator of the series and has its own website augenblickstudios.com as well as its own Youtube channel. I would make a case that they are a cutting-edge, artistic dynamo. I think the Youtube channel gives a broader view of their vision. It is an artistic vision but, in the case of Superjail, one that is hidden under chaos and anarchy and absurdity. In the current cultural climate, Superjail could be seen as artistic progeny to surrealistic geniuses like Salvador Dali and Luis Bunel. That’s quite a stretch, but they were controversial revolutionaries in their day with their own warped sense of humor. I don’t want to make this point too strongly, though. Superjail clearly is just a way to stimulate potheads and malcontents with outrageous humor and insane visuals. If there is real artistic merit here, the creators are making every attempt to hide it by appealing to the lowest common denominator. I would recommend this for discriminating adults, but you have been warned.