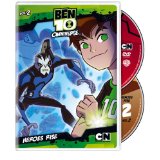 Without my girlfriend’s six-year-old daughter to help me out, I had the opportunity to tackle this 10-episode compilation DVD of the hit Cartoon Network series.  I can’t blame Makayla for her lack of interest in the show; after all, with the title character being a sixteen year old boy who fights robots and aliens, well, I don’t believe she fits the target audience.  On the other hand, as I started watching I began to see that anyone who enjoys aliens and robots is sure to enjoy the show at least to some degree.  For me in the 80’s when I devoured cartoons like Transformers, Thundercats, Mask, etc., it didn’t so much matter about the plot but about the crazy epic fights between my heroes of the animation world and the villains.  Had Ben 10 been out, I’m sure I would have had a blast with it as well.

As a kid, who wouldn’t want the power to transform into any monster and save the world from some terrible monster wrecking havoc on the city?  In a lot of ways Ben Tennyson is that kid we at some point daydreamed of being.  Sure, he has an inflated ego and is obnoxious most of the time, but can you blame him?  Every week some alien or robot created by some crazy doctor is out to kill Ben or attack his loved ones, and after surviving so many attacks, he’s pretty much earned the right to have some bravado.

Kicking off the DVD we are given the two-part episode Of Predators And Prey.  In these episodes Ben seems to have met his match in the form of an alien bounty hunter, Khyber, and his loyal canine companion.  If the character sounds sort of familiar, I couldn’t help but think of the alien bounty hunter in the Predator films.  The episode even gives us a glimpse of Khyber in action, hunting aliens and collecting their DNA to use in his Nemetrix (a knockoff of Ben’s Omnitrix which allows him to transform into specific alien monsters during battle).  In this two-part episode we get plenty of action, and it should gauge how you’ll feel about the rest of the DVD.  The problem is, for me the rest of the episodes never held up to the first two.

Before you get worried and have second thoughts on this DVD, let me say most of the episodes are still a good time.  Blukic and Driba Go To Mr. Smoothy’s is one of those standalone episodes where we get to see the secondary characters bask in the spotlight as they venture out of the Plumber headquarters to get smoothies.  It’s silly and fun watching these guys constantly stumble into trouble, while Ben and his alien sidekick Rook have their hands full fighting a giant elephant-like alien.

As for the weak link of the release, Rules of Engagement simply felt like it was crammed into the DVD to fill space.  Seeing the show out of the context of how it airs on television could play a part in this, considering this is volume 2 and this was my first time viewing the show.  Well, the idea of Ben being engaged to an alien and still pining over a girlfriend he accidently broke up with — to put it nicely, the episode did nothing for me.  By the time the ex-girlfriend and the alien sparred, I had already checked out of the episode and was ready to see what adventure Ben and the gang would be getting into.

Overall I enjoyed the DVD but wish there was more back story for those who may have forgotten, or for parents who haven’t seen the show so they could follow along with their kids.  Like many of the superhero films that saturate the screens, Ben 10 delivers the same message that we see all the time, “with great power comes great responsibility”.  Though the message isn’t as heavy-handed as the theatrical counterparts, the message is still there and is a good message for children to try to take in.

What I appreciate most about this series, more so than other animated shows out there targeting kids, is that Ben 10 doesn’t seem to talk down to its audience or go for simple stupid laughs.  It may not have quotable dialog, but it at least delivers episodes that simply want to entertain, and that they succeed in doing.  Though Ben could use a little more humility, he will continue to have his legion of loyal fans, and hopefully he’ll continue to kick some alien butt while he’s at it.

Brent Lorentson is a horror writer and film critic based out of Tampa, Florida. With a BA in Digital Film, he co-wrote and co-directed Scavenger Hunt. His short stories have appeared in various horror anthologies. In 2019 his short script Fertile Blood will be a part of the anthology horror film Slumber Party. He is currently working on his first novel A Dark and Secret Place set to be released in late 2019. Favorite Films: Taxi Driver, Fight Club, I Saw the Devil, The Wild Bunch, Dawn of the Dead, A Clockwork Orange, Pulp Fiction, Heathers, The Monster Squad, and High Fidelity.
Superjail: Season Three Matlock: The Ninth & Final Season