Letters from Jackie: The Private Thoughts of Jackie Robinson 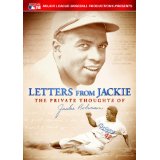 “I paid more than my dues for the right to call it like I see it.”

While most people can say they know who a celebrity is, very few get to know the person behind the fame. (Or infamy.) Unless you’ve walked in that famous person’s shoes, it’s difficult to understand where they’re coming from. It is only when we hear their story in their own words that we can get a glimpse into their world. In Letters from Jackie, MLB Films provides that glimpse into Jackie Robinson’s life via his correspondence. Hosted by New York Yankees center fielder Curtis Granderson, this documentary combines excerpts from letters written by Robinson with interviews of his friends, family and the recipients of those letters. Starting from when he joined the Brooklyn Dodgers and continuing to the last letter he ever wrote, these letters span a range of topics and decades.

As a history buff, I was intrigued by the many historical figures that Robinson corresponded with. Branch Rickey, Dr. Martin Luther King, Jr., John F. Kennedy and Richard Nixon were just a few of the people Robinson wrote to concerning civil rights.

I was most impressed with the way he helped shape the Civil Rights Movement. Robinson wrote tirelessly to achieve equality for all people even before leaders like Dr. King received national attention. He never let his passion get the better of him, even when he was critical of someone like JFK. Instead, he channeled that passion into letters that persuaded without being preachy. Even after retiring from baseball and entering the Hall of Fame, Robinson never stopped working for equality. One of the coolest moments occurs when baseball greats past and present like Sammy Sosa and Derek Jeter take turns saying, “Thank you, Mr. Robinson.”

While the historical figures were interesting, my favorite letters were probably the ones between Robinson and Ron Rabinovitz. Rabinovitz was just a ten-year-old kid from Wisconsin when he met Robinson for the first time at a Milwaukee Braves game and got his autograph. When he wrote Robinson to thank him, Jackie was so moved by the letter that he wrote back, and a friendship was born. Whenever the Dodgers played the Braves, Robinson made sure Ron got tickets and always waved to him from the field. In one of Ron’s funnier stories, he recalls how Robinson took him to the Dodgers locker room and got every member of the team to sign a ball, even the rookie Sandy Koufax. However, Robinson was so determined to get all his teammates’ signatures that he forgot to sign it himself! It’s stories like these that show what Jackie Robinson was really like.

My one complaint about this film is that it’s too short. Clocking in at only 45 minutes, I felt like they were just getting momentum going when the end credits rolled. While there were several interesting parts, only the Rabinovitz story went really in-depth. The rest were lightly touched upon, piquing my interest; and then it was off to the next one before I could think about what I just heard.

While this was a solid film, I think more depth could have been added to make it a richer, more engaging documentary. However, I would still recommend watching it to any baseball aficionado or history buff.