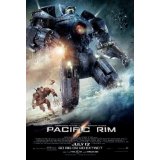 “We always thought that alien life would come from the stars, but it came from deep beneath the Pacific.”

The only thing we seem to love more than giant monster movies are movies about giant dudes going a few rounds with said giant monsters. It was huge television fare in the 1960’s and 1970’s. We had Ultraman, Space Giants, and Johnny Socko. All of them were Japanese imports that gave us daily or weekly monsters doing the old “Tokyo Stomp”, and just when things appeared at their darkest, the giant hero would arrive and give us a show more akin to the weekend wrestling shows than anything else. We’d get choke-holds and body slams that would make the rubber suits jiggle as they fell. It was all in good fun and appears to have pretty much disappeared from the television and film landscape. That is, until Guillermo del Toro brings us one of the summer’s eagerly awaited tentpole films: Pacific Rim.

“In order to fight monsters, we created monsters of our own.”

The story doesn’t really waste any time with the usual mundane setup. Usually we spend nearly half the film getting to know the characters. For better or worse, that’s not really necessary here. An opening narrative explains the parameters of the situation. Monsters have been arriving from a portal under the Pacific Ocean. Once it was realized that they were going to keep on coming and get even larger, the world pooled its resources to form the Jaeger Project, which my German colleague at the screening was quite giddy to inform me is the German word for hunter. Of course, you won’t need her help, as a text line on the screen will give you the exact same information. We also learn that Kaiiu, the word used for the creatures, is the Japanese word for strange beast in the Godzilla vein. The Jaeger Project involved building giant robots to fight these monsters on their own level. They require two pilots who mind-meld with the robot and each other in something called “the drift”. It allows them to control the machines efficiently and with intelligence. The pilots become heroes and become like huge athletic stars today.

Two such pilots are the brother team Raleigh (Hunnam) and Yancy (Klattenhoff). Yancy was ripped out of the robot by one of the monsters in battle while still connected to his brother in the drift. It left an emotional scar on Raleigh, and he left the program only to be rediscovered years later when the situation becomes about as dire as it can be.

The creatures are coming faster and stronger than they’ve ever come before. Construction of the robots can’t happen fast enough to keep up. Humanity is losing the fight. The last stand is a base of operations at Hong Kong with the last of the trained pilots and the handful of remaining robots. The base is run by Stacker Pentecost (Elba), himself once a gifted Jaeger pilot. There’s a scientific team led by Dr. Geiszler (Day), who has made a startling discovery about the origin and intent of the creatures. A plan is developed to drop a nuke into the portal, and hopefully close it forever. Obviously, they need the best, and Raleigh was once one of the very best. Now he’s paired with a young Japanese girl with no experience but who is tied to Pentecost. The world will end up depending on “the has-been and the rookie”.

The result is the kind of Transformers vs. Godzilla action that you are likely going to see. The action here is completely non-stop and quite manic at times. The entire film is intended more as a visual spectacular than anything else. It’s an amusement ride, and don’t be too surprised when one of the Florida parks decides to do just that. The images are nothing short of incredible. The monsters are imaginative and are different enough from any that have come before that the experience will be fresh and unique. The robots are a kind of cross between Real Steel and Transformers. The fights will remind you quite a bit of Transformers, actually. That’s both a marvel and a bit of a disappointment. Sometimes the action is filmed so fast that it’s quite difficult to pin down what you are seeing. When more than one of the robots gets into the action, things move so quickly that it’s nearly impossible to pinpoint exactly who is fighting whom. Often the flashes make it just as impossible to focus on anything long enough to truly appreciate everything you are seeing. I’m sure del Toro is paying very keen attention to the most minute details, but it will not always be possible to appreciate the finer aspects of the special effects.

The story is quite original, all things considered. This film is not based on an existing property of comics, books, toys or movies. That in itself is rather refreshing. Writers Travis Beacham and del Torro have tapped into a very special part of our imaginations. Since childhood we’ve been fascinated by monsters, and the bigger the better. The film manages to fulfill these life-long fantasies. There is a ton of homage being paid to the Toho tradition of Godzilla and others. It’s obvious that these two guys share our references, and more importantly they understand what makes them work. These familiar elements find their way into a story that doesn’t feel as derivative as you might expect. They’ve managed to honor without copying. It’s a tightrope walk that is very much appreciated and makes this one of the more enjoyable films I’ve seen this summer. It almost gives me the kind of boyhood pleasure that The Avengers brought last summer. Almost…

Where the film does fail to achieve greatness is in the casting and dialog. I love Charlie Hunnam in Sons Of Anarchy, but he just doesn’t carry the weight of the conquering hero here. He doesn’t have enough emotional strength to bring home the payoff scenes with Rinko Kikuchi, who is often a little flat herself. With Kikuchi it’s a bit more appropriate, as she is the wild-eyed newbie to this whole experience. In many ways she’s our representative in the film.  Here the supporting characters are much stronger than the leads. Ron Perlman plays a very small role here, but he can’t help steal a portion of the film along the way. Idris Elba is a hugely strong character here but not due to anything dynamic in the script’s dialog. He adds gravitas to every line he delivers, and somehow it doesn’t matter how stilted the words are. Any fan of The Wire has always been aware of his ability, and that skill explodes in this film. Charlie Day brings the comedy relief in a role that reminds us of Brent Spiner’s crazy scientist from Independence Day.

In fact it’s in relation to Independence Day where the film does tend to feel derivative. Elba’s inspiring speech about canceling the apocalypse appears ripped straight out of ID4. The alien invasion element and the final solution mirror that film’s tone and even its look almost too much. There’s a shot of one of the “creatures” staring at the nuke watching a countdown that I could swear is almost shot for shot from ID4. I think they even got the expression just the same. All of these things can be forgiven when you accept the fact that you’re here for the ride and just take it.

The 3D is pretty impressive. There’s a ton of destruction and debris in this world. That leaves plenty of opportunity to have ash and dust particles in the air most of the time. It’s a pretty standard 3D trick, but it does assist in adding dimension to the experience. It’s worth the premium, in my opinion. During the fights I’m not sure the 3D is even noticeable when things move so fast, and I heard a couple of people in the audience complain that these scenes gave them a streak effect. I didn’t experience that, however.

I suspect there will be more from this universe. I can’t see Warner Brothers turning down the franchise potential here. del Toro has the same inner kid that most of us movie fans keep not so well hidden in our own hearts. Pacific Rim gives us a place to let that kid roam and look up in wonder once again. For that alone, it’s worth the price of admission. Perhaps it’s been a while since you let your inner child come out and play. Perhaps you’ve tried, but the serious world around you hasn’t afforded you the opportunity. “Would you like to try again?”

Gino Sassani is a member of the Southeastern Film Critic's Association (SEFCA). He is a film and television critic based in Tampa, Florida. He's also the Senior Editor here at Upcomingdiscs. Gino started reviewing films in the early 1990's as a segment of his local television show Focus. He's an award-winning recording artist for Omega Records. Gino is currently working on his 8th album Merchants & Mercenaries. Gino took over Upcomingdiscs Dec 1, 2008. He works out of a home theater he calls The Reel World. Favorite films: The Godfather, The Godfather Part II, The Body Snatcher (Val Lewton film with Karloff and Lugosi, not the pod people film), Unforgiven, Gladiator, The Lion King, Jaws, Son Of Frankenstein, The Good, The Bad And The Ugly, and Monsters, Inc.
Matlock: The Ninth & Final Season Letters from Jackie: The Private Thoughts of Jackie Robinson