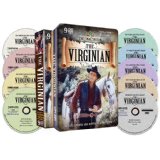 The 8th season would appear to be the final year for The Virginian. I say it would appear, because in spite of what it says on this release, the show would actually continue on for one more year. The name would be changed to The Men From Shiloh, which would also be used in many markets when the show would enjoy its syndication run. Unfortunately, many of the stations at the time cut the episodes down to fit the one-hour time slot. But you don’t have any of those worries now, as Timeless Media brings us the final season of episodes to air under the name The Virginian.

There was really only one major cast change on the show in the 8th season. David Hartman left the show after only one season as Dave Sutton. The youth was represented this season by Tim Matheson as Jim Horn. He would be introduced in the season’s first episode and continue for just this season. All of the cast would leave for the Men From Shiloh season except for stars James Drury and Doug McClure.

In case you have no idea what I’m talking about, here’s a recap of the series itself, followed by some highlights of this 8th season.

This was the heart of the original novel. The stories were less about gunfights and more about the obstacles and challenges that these earlier settlers faced. Each, with different interests, tried to carve out a home in the vast wilderness of the open West. These challenges came from many places, and often from one’s fellow man, but not always. That’s the type of tale captured in this long-running western series.

The series was named after the main character in the series. The Virginian (Drury) had no other name. He was the foreman on the extensive Shiloh Ranch. The ranch took up fully half of the Wyoming territory. The Virginian’s right hand man was Trampas (McClure). The ranch was owned by Clay (McIntire) and Holly (Nolan). The two actors were actually husband and wife in real life. They had a niece, Liz (Lane).

Another way this show was different was the ease with which the supporting characters got themselves episodes where they were the focus. There are even episodes where The Virginian himself was either not in the episode or relegated to a cameo, often at the beginning or end. There are another 24 episodes on 9 discs.

There were some very strong episodes to be found in the 8th year:

The Long Ride Home: This episode introduces us to Jim Horn. He’s traveling with Ben Stratton, played by Leslie Nielsen. The two are very close and share a father and son dynamic almost in reverse. Both sign on at Shiloh, and Ben is tempted by a couple of rustlers who have their eye on Shiloh beef. Jim has to teach the old man the right thing and stays on while Ben decides to go his own way.

It’s a great way to introduce the character. The story is more emotional than most, and Nielsen gives a pretty nice performance. It is times like these that we’re reminded he was actually quite the dramatic actor before he found a niche doing deadpan comedy.

A Flash Of Darkness: This is another standout performance by James Drury. It seems every year he got one episode where he was allowed to push the limits of his character and show what kind of talent he actually had. I think Drury was underrated as an actor, and episodes like this offer ample proof of that fact.

The Virginian is injured when he falls from his horse. He is blinded and alone in the wilderness. He manages to work his way to a cabin where he is helped by a young girl. What he doesn’t know is that she shares the home with a group of guys that he had trouble with on the cattle drive. They were belligerent, and he fired them. Now he’s at their mercy and discovers they intended to rustle some of the cows while on the drive. That information puts his life in danger from the outlaws.

The Substitute: It just wouldn’t be a complete season of The Virginian if Trampas wasn’t wrongly accused of murder and brought within minutes of being hanged for the crime. Here he is again. He’s on vacation when a bounty hunter, working for a small town’s power elite, brings him in for the murder of a popular doctor. Of course, it’s the powerful guy’s kid that did the murder, and the case depends on the testimony of a saloon girl who is willing to lie to protect her lover.

I guess I don’t mind that they seem to do this story every year. It’s a chance for McClure to shine, and he usually does. Like Drury, he didn’t always get the opportunity to show his emotional range, and this one allows that chance. Trampas can’t help feel sorry for the girl, if it weren’t that she’s about to put a rope around his neck. This one differs a little from the others in that his friends don’t come to the rescue at the last minute.

Home To Methuselah: John Anderson was one of the best character actors of the time, and he gets to show off here as a ghost from The Virginian’s past. He plays Seth James, who knew The Virginian back in his days in Virginia. He was a father to him and his mentor. He was a famous lawman who is now on the trail of a group that caused a deadly fire during a holdup. It’s personal, and he’s not interested in the reward money. The Virginian ends up riding with him to get the last of the outlaws and finds himself in a moral dilemma when he decides that Seth plans on killing the guy even if he gives himself up.

If you’re hoping this blast from his past will give us some new info on The Virginian, don’t hold your breath. While we get the impression that Seth probably knows his name, it’s never used here, and we don’t really learn anything new. It is another chance for Drury to show a more emotional side, and he has wonderful chemistry with Anderson.

Nightmare: Joan Crawford makes a surprising appearance in a rather unflattering role. Michael Conrad from Hill Street Blues plays her husband, who is paralyzed in an attack. She has to care for him and fend off the attentions of his brother who wants his land…and his wife.

I say the part is unflattering because it’s not really a very good performance by Crawford, who is capable of so much better. She doesn’t appear to feel as if the part requires much effort, and when she does commit it’s usually over the top. I suspect whatever reasons she had for playing the part, she found it beneath her during the shoot. It’s unfortunate, because it’s a strong episode that addresses some material likely sensitive for the time. You don’t see handicaps being addressed often in these old western shows.

Holocaust: Clay finds himself at odds with the other ranchers in this rather milestone episode. The price of beef is falling fast, and the Cattleman’s Association is split on how to deal with it. Clay wants to combine their herds and get them to market where he’s negotiated a price, but only for a short time. Meanwhile, there’s an Eastern company executive that is trying to use the crisis and split to buy up the rights to the local ranchers’ beef. It’s a “use the land and get out of town” approach that Clay is against. The opposition sabotages the drive and burns Shiloh to the ground.

It’s a big episode, because the show almost never took things this far. The ladies are still in the ranch when it burns, and the episode almost never lightens up. Of course, Shiloh is almost instantly rebuilt, but it goes down as one of the darkest episodes in the show’s history.

Train Of Darkness: This is a rather intense bottle show. Clay, Jim, and the ladies are on a train to Medicine Bow. A father and his sons plan to stop the train to get to the gunman inside who killed his son years earlier.

The real attraction of the episode is that it takes place mostly in the tight confines of a train car. There is a very interesting collection of characters. Dennis Weaver stars as a newlywed who hopes to makes a new start with his young wife in a new area. There’s a drunken cowboy. A husband and wife acting troupe are running away from a disastrous performance brought on by her snobbish and stubborn ways. A blackjack card shark rounds out the collection of characters. It’s all about the interactions here. The staging is almost like a play, and the episode would actually make a very interesting play.

I’m truly going to miss covering the series for our readers. My exposure before embarking on this task was only passing. Like many folks I’d heard of the show and little more. Timeless Media has changed that for me, and hopefully I’ve changed that for you. The last season under The Men From Shiloh was released years ago, and I’m not hopeful we’ll have a chance to cover it in these pages. It was a wonderful ride and one I suspect I’ll return to from time to time. Until then, “I’d like to propose a toast — To Shiloh“.

Gino Sassani is a member of the Southeastern Film Critic's Association (SEFCA). He is a film and television critic based in Tampa, Florida. He's also the Senior Editor here at Upcomingdiscs. Gino started reviewing films in the early 1990's as a segment of his local television show Focus. He's an award-winning recording artist for Omega Records. Gino is currently working on his 8th album Merchants & Mercenaries. Gino took over Upcomingdiscs Dec 1, 2008. He works out of a home theater he calls The Reel World. Favorite films: The Godfather, The Godfather Part II, The Body Snatcher (Val Lewton film with Karloff and Lugosi, not the pod people film), Unforgiven, Gladiator, The Lion King, Jaws, Son Of Frankenstein, The Good, The Bad And The Ugly, and Monsters, Inc.
Skull World: Warrior Edition The Way, Way Back