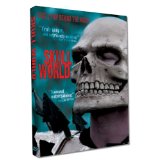 When describing Greg Sommer, at first one would believe you are describing what most would consider a man-child.  You know, the 30-something male who still lives at home with mom and on the weekends dresses up in elaborate cardboard costumes and takes part in epic backyard battles.  But in this case that would only be a superficial look at a man that seems to have found the secret to happiness and has the tenacity to pursue his dreams unlike anyone I’ve ever met.  Skull World is a documentary that follows Greg over the course of three years, and what he manages to accomplish in that time, man-child or not, is still impressive.

In his high school years, Greg came up with the persona of Skull Man that at first was meant to only be a Halloween costume, but with time it has become his identity.  Friends and family seemed to of just accepted Greg for who he is with the mask as well as his fun, childlike personality.  He loves his rock-and-roll-like persona, but even more than his love for the band Clutch, nothing seems to mean more to him than Box Wars.

So what are Box Wars?  Well imagine seeing about 50 grown men (and some women) dressed in armor, but instead of steel their costumes are made up of cardboard.  These men also take pride in their suits.  The creativity and effort put into these costumes is impressive; after all, their only purpose is to be destroyed in the heat of battle, whether it’s in someone’s backyard or during the halftime show of a Roller Derby match.  This is an activity that is more than just a hobby, but an obsession for all those who participate.  Even at one point, director Justin McConnell suits up and gets in on the pseudo Braveheart-like action.  What I found even more shocking is that these guys taking part in the Box Wars are nothing like the geeky kids you’d expect, but crazy metal-heads who drink beer and smoke weed. (Okay, maybe I shouldn’t be so surprised.)

It would be easy for this to simply make a joke of Sommer and all those involved, but thankfully McConnell was able to catch the genuine passion he has in this activity.  Is it what the average person would consider normal? Of course not, but Sommer doesn’t care about fitting in, he cares about living his life and following his dream.  When we first meet Greg he is working as a caretaker at a funeral home and is a freelance videographer on the side.  As the time goes by he quits the cemetery job and goes all in on making Box Wars a full time gig.  This kind of ambition and drive is nearly impossible not to admire. As he confronts setbacks he simply charges on in his pursuit of his dream.

From a production standpoint this was made on a very modest budget, but none of that affects the story McConnell attempts to tell.  There are moments that work in this documentary that I simply wish there were more of, like the phone conversation we get to listen to between Greg and his father.  This is a touching moment where it seems for the first time Greg feels his dad is actually proud of him, and the emotion in this scene seems to set up for something more, but nothing ever comes from it.  Here was a moment where we should have gotten a closer look at Greg and his relationship with his family; sure, we understand he hasn’t seen his father in six years; isn’t this the cue for the director to pry a little and give us that emotional tug on the heartstring?

Some of the best cinematography comes when Greg leaves his Canadian home to visit the men who inspired Box Wars for him in Australia.  Here we get some beautiful beach shots but also some fun in the heat of battle shots during a Box War where Skull Man is the guest of honor.  It’s also in Australia where he sees how far he has to go in terms of scale for the battles and designs back home.

Watching Greg’s dream evolve is something every dreamer can appreciate and root for.  Towards the end of the film we get to see Greg in a production meeting with a producer who is looking to turn Box Wars into some sort of a reality competition show.  It’s during this scene he makes a confession for the room (and the camera) about having a “dream wall”, and it’s in this moment I feel it sums up the man for who he is and who many should aspire to be when given the opportunity for even modest success.

Brent Lorentson is a horror writer and film critic based out of Tampa, Florida. With a BA in Digital Film, he co-wrote and co-directed Scavenger Hunt. His short stories have appeared in various horror anthologies. In 2019 his short script Fertile Blood will be a part of the anthology horror film Slumber Party. He is currently working on his first novel A Dark and Secret Place set to be released in late 2019. Favorite Films: Taxi Driver, Fight Club, I Saw the Devil, The Wild Bunch, Dawn of the Dead, A Clockwork Orange, Pulp Fiction, Heathers, The Monster Squad, and High Fidelity.
Wild Deep (Blu-ray) The Virginian: Season Eight (Final Season)