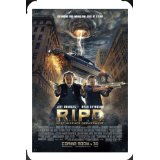 Stars grow old and die. I don’t know what they do in the afterlife. Maybe they look over the shoulders of studio executives, mouths open in horror at the scripts they are reading. Stars do die, and they need to be replaced. The torch needs to be passed, and I don’t always think studio heads give these matters enough thought. Stars aren’t born. They need to be made. Sanded down, left out to dry, buffed and polished so hopefully they shine really bright. Jeff Bridges and Ryan Reynolds are the names above the title of R.I.P.D. Jeff Bridges, the baby and the brother of movie stars, has shone bright over the years. Bridges just picked up his first best actor Oscar a couple of years ago after a number of tries.  He has done it all and is now a leathery, grizzled veteran of the Hollywood landscape. Ryan Reynolds is a smart, hardworking and appealing actor who seems always on the verge of superstardom.

Ryan Reynolds has been around. He’s been engaged to Alanis Morrisette, then married Scarlett Johansson and then married Blake Lively. You get the impression that he’s a nice guy, and both Alanis and Scarlett expressed regrets about the breakups. Comedy seems to be his forte, but he clearly has made attempts to do intense dramatic roles, most notably in Buried which consisted of him emoting alone in a coffin for the entire length of the movie.

Pairing an upcoming star with an established supernova has been a good strategy in the past, used effectively by Tom Cruise over the years, most notably in Rain Man (Dustin Hoffman) and The Color of Money (Paul Newman), helping both of his co-stars win Oscars for their roles. Reynolds has had big hits recently with Sandra Bullock (The Proposal), Denzel Washington (Safe House) and Nicolas Cage (The Croods). He even tried to go the Oscar bait route with Julia Roberts in the intense but little seen Fireflies in the Garden. Reynolds is also interested in the most successful genre in movies, superheroes. He has played Green Lantern and is set to reprise and reboot his Deadpool character from X-Men: Origins. Reynolds is 36 years old.

Jeff Bridges is 63 years old, but I don’t think he plans on collecting Social Security. He just recently played Rooster Cogburn in True Grit and gave the Coen Brothers one of their biggest successes. The Rooster role looks a lot like his character in R.I.P.D. It also looks a lot like his portrayal of Wild Bill Hickok from 1995’s Wild Bill. The son of Lloyd and the brother of Beau, Bridges has worn his Hollywood royalty lightly with affability and non-nonchalance. His career speaks for itself, but I should list some well known highlights: The Last Picture Show, King Kong, Heaven’s Gate, Tron (and Tron: Legacy), Against All Odds, Starman, Jagged Edge, Tucker, The Fabulous Baker Boys, The Fisher King, The Mirror Has Two Faces, The Big Lebowski, The Contender, Seabiscuit, Iron Man, and Crazy Heart (Best Actor).

R.I.P.D. is based on a comic as so much is now. As a matter of fact, one of the co-stars, Mary Louise Parker, has another movie based on a comic coming out this very week (Red 2). It is a spectacular-looking movie with the computer-generated effects looking better than ever. It looks so good that it doesn’t bother me that it borrows so heavily from Men In Black. The main difference is, if the TV commercials hadn’t made this completely clear, that these cops are dead and they are hunting the evil dead. Reynolds is not dead at the very beginning, and the special effects are especially impressive as a giant tableau of chaotic violence is frozen while his soul walks through it. Then he is sucked up into the afterlife. I am endlessly fascinated by depictions of the great beyond, and this looks like it’s going to be good. Then our story kicks in as he is partnered with Jeff Bridges who hams it up with his Rooster Cogburn/Wild Bill mash up.

I will say I probably did enjoy it more that MIB 1, 2 or 3 just because the special effects are just getting crazy good. It doesn’t so much matter that it’s derivative, because every big-budget movie is nowadays, and it doesn’t look like that’s gonna change for a while. It also makes good use of the Ghost storyline that Patrick Swayse and Demi Moore used so well all those years ago. Kevin Bacon shows off his scary face to good effect as well.

Reynolds is listed as a producer because he absolutely intends on playing every comic book character that people will let him play. I like the guy, so I hope people will go to this movie and make him happy.