Posted in: Disc Reviews by Brent Lorentson on July 22nd, 2013 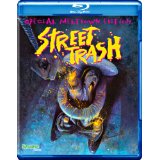 Some cult classics you have to just wonder how it is they manage to stand the test of time.  For the life of me I’ll never understand the love for The Rocky Horror Picture Show, but yet when someone mentions the cult classic Frankenhooker, I can’t help but light up with geeky delight.  As film geeks most can admit these cult classics are far from great films, but yet there is a charm about them we can’t resist, and not only do we rewatch these guilty pleasures, but we also have the irresistible urge to thrust these films on our friends.

When a liquor store owner discovers a crate of unopened, cheaply made wine labeled “viper” in his cellar, he does what any good business man would and takes it up to the counter to sell it.  The trouble is this special brew does more than give you a hangover; instead it causes the body to swiftly break down and melt into a colorful puddle of goo.  Unfortunately it seems the only customers picking up this deadly booze are the local bums who have managed to scrounge up a buck to make their lethal hooch.

It’s in a nearby junkyard where all the local homeless people take up residence, and in charge of this motley crew is a crazed Vietnam vet, Bronson (Vic Noto).  Though Bronson functions more as the film’s villain, he’s one of the films more dynamic characters.  Sure, he’s flawed and insane, but I can appreciate that he’s made the best of his situation which includes having his own homeless wench and manages to have the respect — though out of fear — from the other homeless residents.

Our sympathy is supposed to fall onto two young runaways Fred (Mike Lackey) and his younger brother Kevin.  Fred has managed to make the best of his situation, learning all the tricks of the street to scam a quick buck or steal a bottle of booze.  He doesn’t have the qualities of your typical “hero” nor does he want to embody them.  In a scene where Fred picks up a heavily inebriated woman and brings her to the junkyard, what proceeds is a scene that begins as simply him taking advantage of the woman but ends in a tragic despicable manner.  From the moment Fred brings the woman into the yard, what we previously saw as shameless and charming winos transform into violent fiends driven by their animal instinct and something to fear.  This moment is a pivotal one and shifts our sympathy away from the “street trash”; perhaps their demise by the toxic booze is something they have coming.

The film works well as the B horror film it was intended to be.  It juggles the humor and the horror in a fashion that is simply not seen enough anymore.  The script was penned by Roy Frumkes who is responsible for the classic documentary Document of the Dead as well as writing another cult classic The Substitute.  The script and film was ahead of its time with its irreverence to what is politically correct and what some would find decent for the big scene.  I’m still trying to shake a penis-cutting scene that results in an impromptu game of hot potato with the severed part.  It’s hard to decide whether to laugh or be disgusted, and that’s how the film plays out.

What also stands out is how stylish this film is.  Traditionally horror films are filmed in creepy locals in the middle of the night.  But here a majority of the film is shot in the daytime and is filled with inspired cinematography that captures the filthy texture of this derelict world.  Seeing the over the top colorful gore may not translate so well for horror fans who have scooped up the latest “realistic” trend with horror, but for those who dig Evil Dead 2 and Dead Alive, this should be up your alley.

Street Trash is presented in the 1.78:1 aspect ratio.  The 1080p image is arrived at with an AVC MPEG-4 codec at an average of 29 MBPS.  Considering this high-definition transfer is from the original camera negative, this is just about the best this film has ever looked.  Its colors are lush and the gore is dare I say beautiful and over the top.  The flesh tones look natural, and the texture and depth of the art design can be appreciated for its shoestring budget ingenuity.

The DTS Master Audio 5.1 track unfortunately doesn’t shine as well as the video transfer does.  At times the music cues are a bit sharp and loud to the point where I had to lower the volume a bit, but then this at times affected the dialog.  I could still hear the dialog, but it just seemed like the mix was off.  It doesn’t ruin the experience by any means; these are just nitpicking issues.

Audio commentary with writer/producer Roy Frumkes:  Of the two audio commentary tracks this one has the most insight about the film.  Roy knows how to keep it interesting throughout most of the track, which is impressive since he’s on his own.  The guy is filled with information and offers insight to what more could have been in a sequel.

Audio commentary with director Jim Muro:  For those up-and-coming filmmakers out there, this track is worth giving a listen-to for the technical insight into the making of this film.  The man has been a steady-cam operator on some of Hollywood’s biggest pictures.  It may not have as many “fun” stories as Roy’s track, but it still is filled with useful information for the film students out there.

The Meltdown Memoirs: (2:03) This feature-length documentary is directed by Roy Frumkes, and like his documentary Document of the Dead, this is filled with behind-the-scenes footage and interviews to satisfy every fan.  The highlight for me is seeing interview segments with Bryan Singer (yes, the Bryan Singer of The Usual Suspects fame) who was a PA for the film.  Seeing where everyone came from and where they are now is always a fascinating thing for me when it comes to those involved with cult classic films.  There is so much information crammed into this documentary that it should almost be required viewing for all horror film enthusiasts.

The Original Street Trash 16mm Short Film: (15:05) Nowhere near the budget they had for the full feature, obviously, but still this offers a glimpse at the “rough draft”, so to speak, of what would eventually become the feature.  Mike Lackey and some of the other hobos from the film are here as well.  It’s campy and fun.

Jane Arakawa Interview: (9:15) In the documentary the only major cast member we don’t get to hear from (who is still amongst the living) is Jane, who played Wendy in the film.  Well, apparently they tracked her down for a Blu-ray exclusive interview, and, well, let’s just say she’s had a colorful life since the film.

Deleted Scenes: (7:22) A collection of deleted scenes that really do nothing for the film, and we can see why they ended up on the cutting room floor.  But for those who want more, the scenes are here for your pleasure.

Synapse knocked this Blu-ray out of the park.  Sure, it’s a B-movie from the 80’s, but the film is worthy of this special meltdown edition.  This is midnight movie entertainment at its finest and is a blast.  No, it doesn’t have the polish of classics like The Exorcist or The Shining, but this is a film to kick back to and have fun with.  There are hours of bonus content to sift through that will make any gore hound happy.

Brent Lorentson is a horror writer and film critic based out of Tampa, Florida. With a BA in Digital Film, he co-wrote and co-directed Scavenger Hunt. His short stories have appeared in various horror anthologies. In 2019 his short script Fertile Blood will be a part of the anthology horror film Slumber Party. He is currently working on his first novel A Dark and Secret Place set to be released in late 2019. Favorite Films: Taxi Driver, Fight Club, I Saw the Devil, The Wild Bunch, Dawn of the Dead, A Clockwork Orange, Pulp Fiction, Heathers, The Monster Squad, and High Fidelity.
R.I.P.D. Twixt (Blu-ray)