Detention of the Dead 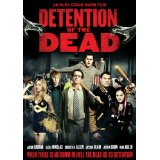 Has anyone ever wondered what The Breakfast Club would have been like if it had zombies? I know I haven’t. Well, despite no desire to see such a thing, Detention of the Dead is here to showcase just that. Take a cast full of the supporting cast members from popular television series and movies from the 2010 generation such as Glee, Twilight, and Greek, give them a script litter with made up words designed to be funny (and failing miserably in the attempt), and you have a project that makes you feel like you are trapped in detention.

So here’s how it plays out;, there’s no real buildup; somehow people start to become infected with some type of contagion that reduces them to mindless, flesh-eating zombies, and the audience has no clue how it happened or who is to blame. Somehow this infection finds its way to a local high school where detention is about to commence. The class consists of Eddie (Jacob Zachar, Greek), a nerdy first time offender who is desperately in love with another offender, a stuck up cheerleader Janet (Christa B. Allen, Revenge) who earned a sentence after being caught in the bathroom with her boyfriend Brad (Jayson Blair, The New Normal), the high school bully who makes Eddie’s life miserable.

Rounding out detention is Goth chick Willow (Alexa Nikolas, The Walking Dead), stoner Ash (Justin Chon, 21 & Older), and jock Jimmy (Max Adler, Glee). There’s another kid, but his name is not important considering he is simply meant to serve as a catalyst for the group discovering the zombie predicament. Once aware, the group does what anyone would expect them to do: hole up in the biggest room they can find and barricade themselves inside; in this case that room would be the school library. Trapped with unrelenting horde hunting them, the group only hope is working together.

Built like a comedy, perhaps the film’s biggest tragedy is that it just wasn’t funny. It has all the parts that you would expect to find for it to be funny: pop culture references, a supposedly wise-cracking burnout, and a fun setting, but I just wasn’t feeling it. The film tries to be too many things at once; it tries to capture some of the magic of what made John Hughes movies legendary such as putting kids from separate cliques into a situation together, a guy reaching for something seemingly unattainable instead of recognizing what’s right in front of him, the library confession from The Breakfast Club combined with stoner comedy filling and a sci-fi coating. It’s just too much; if you’re going to try to make a mash-up, keep it to the basics.

Another pitfall is that none of the cast really stepped up and established themselves. Closest one was possibly Alexa Nikolas during the scene where she and Zachar’s character discuss his feelings for Allen’s Janet. Chon, who I had pinned my hopes on, turned out to be a letdown, as like the rest of the cast, his character was a carbon copy of the stereotype. No one made the character their own, and the dialog and the performances as a whole were cheesy.

I don’t know whether to call the film a parody with sci-fi twist or a black comedy that just missed the mark, but my expectation for the film went down almost immediately. I feel like that if done slightly differently there could have been a mildly interesting story in there somewhere. It just got lost among all the other attributes; the best thing to do is to take it as a learning experience and move on.

Jeremy Butler is a film school graduate of the International Academy of Design and Technology. He is been writing for Upcomingdiscs since 2012; however, movies have played a big part of his life for much longer. Favorite genres include horror, science fiction/fantasy, and comedy. Favorite movies are V for Vendetta, Boondocks Saints, Kiss Kiss Bang Bang, and The Godfather.
The Best Movies Of Summer Are Coming Of Age Niagara (Blu-ray)