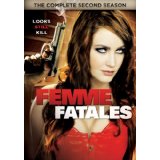 The Cinemax anthology series continues to be my guilty pleasure that when it’s over I simply want just a little bit more.  The show takes sleaze and debauchery to a whole new level, and I mean that in the best way possible.  At first glance and even if catching an episode out of context, for some the show may resemble some B-grade skin flick, but for those who sit back and give it a chance, you’ll discover it is so much more.  But for those who may find beautiful women randomly discarding their clothes mixed with random acts of violence offensive, well, here is your chance to run away and never look back, because this show takes pleasure in pushing the limits of decency and good taste.  And that is what makes it fun.

With season two we get 12 new tales about women and the trouble they manage to get themselves into.  After watching the entire season the biggest issue that jumps out at me is the lack of diversity throughout the season.  The first season managed to deliver a new flavor and style with every episode but kept the focus on the beautiful femme fatales throughout.  This season they all seemed to fit into the same mold of modern noir pieces with the exception of Bad Science, Hell Hath No Furies, and Libra.  It’s no big surprise that these turned out to be some of the more fun installments of the season.

It’s hard to pick a favorite this season, because like the first season I continued to have fun with the show.  As for finding the weak link in the batch I’d have to say is Crazy Mary, a predictable tale about a woman who may or may not be unfairly institutionalized for killing her husband.  The story was simply too rushed to develop a complex character like Mary or the deranged killer she claims is responsible for the death of her husband.  Seeing the potential of what could have been, especially seeing the cast of characters that fill the mental asylum throughout the season, this simply felt like a huge misstep by those involved.

In Jailbreak we have a fun return to characters from the first season; it seems the love-struck prison guard may not have learned his lesson about getting involved with the inmates.  This time instead of falling for a Hollywood starlet, the prison guard has fallen for a girl serving a life sentence who has big plans on making a prison break.  Sure, once you sit back and think about the actions the characters are taking, you’ll see how convoluted it all is, but this is escapists television at its most salacious point.

The episode I see most people enjoying and the most accessible for those not familiar with this over-the-top noir style would be Hell Hath No Furies.  It’s very blatantly a ripoff of The Usual Suspects, but done in the modern grind house style take.  They even have the dirt on the screen to look like a long-used print of a film.  It’s about a jilted lover who wants payback after El Jefe, the most notorious drug dealer on the west coast, takes her for granted, and her conscience has gotten the best of her.  Being one of the only people who can finger who this mythical drug dealer is, the assistant DA is willing to make a deal and guarantee protection.  Too bad El Jefe has sent three of his most ruthless female assassins to kill her and everyone in the police station.

Making appearances this time around we have Jeff Fahey (Lost), Vivica A. Fox (Kill Bill) and Casper Van Dien (Starship Troopers).  My personal favorite appearance is by Jeffrey Combs, who unfortunately has to perform behind a mask in Killer Instinct.  Combs is one of those actors who simply is able to add a layer of creepiness and intelligence to a character that is not utilized enough.  Fahey was another addition who was fun throughout the comic book hero themed Libra, but I just wish he was given more to do.

Though I didn’t find the show as fresh and fun as the first season, it still has enough sexiness and bite to keep me watching.  I haven’t seen if the show has been picked up for a third season yet, but if it does there are plenty of characters from the first two seasons I’d love to see them explore and have more fun with.  It’s doubtful this will ever win any awards, but sometimes you just need a little guilty pleasure now and then.

Brent Lorentson is a horror writer and film critic based out of Tampa, Florida. With a BA in Digital Film, he co-wrote and co-directed Scavenger Hunt. His short stories have appeared in various horror anthologies. In 2019 his short script Fertile Blood will be a part of the anthology horror film Slumber Party. He is currently working on his first novel A Dark and Secret Place set to be released in late 2019. Favorite Films: Taxi Driver, Fight Club, I Saw the Devil, The Wild Bunch, Dawn of the Dead, A Clockwork Orange, Pulp Fiction, Heathers, The Monster Squad, and High Fidelity.
Niagara (Blu-ray) Hands Of The Ripper (Blu-ray)