Hands Of The Ripper (Blu-ray) 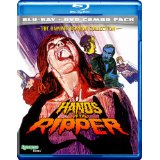 In the 1950’s and 1960’s Hammer picked up where Universal had left off. They became the studio for the very best in horror films. With names like Lugosi, Karloff and Chaney finally reaching the end of their reign, Hammer offered up the likes of Christopher Lee and Peter Cushing. They resurrected all of the famous Universal monsters in their own image. Now we had a new cycle of Dracula, Frankenstein, The Wolf Man and The Mummy. While the films were somewhat low-budget and released mostly through the drive-in circuit, these films made a bloody splash with horror fans all over the world. But by the time the 1970’s had begun, the studio was falling behind in the horror genre. Anthony Hinds had left the studio, and with him went some of the passion for the horror films that made Hammer famous. The studio heads became more interested in other kinds of films, and the horror department languished for a time.

While the studio was still bringing back the monsters that had made it famous, there was a decided effort to return to their own roots with the psychological thriller, and one of the best turned out to be Hands Of The Ripper. Hammer was certainly in decline, but Hands Of The Ripper had the advantage of being shot at England’s famous Pinewood Studios where other more illustrious films were also in production at the time. Sets were utilized from The Private Lives Of Sherlock Holmes and more notably James Bond. M’s office would be completely recognizable here, complete with the padded door. These sets and production advantages allowed Hands Of The Ripper to go beyond the cost-cutting measures in place at Hammer during this time. It ends up being one of the studio’s richest and most atmospheric films.

The film suffered most from a poorly designed market campaign. If you look at trailers, posters or other promo offerings of the time, it appears that the film is really a Jack The Ripper affair complete with the bloody slashings that real-life killer was famous for. Jack does indeed make an appearance in the beginning of the film, but it is rather brief. He kills his wife in front of their young daughter which traumatizes the daughter, setting the stage for the actual plot of the film. This isn’t as bloody a picture as you would expect. Yes, there are some rather explicit kills, but they do not dominate the landscape of the movie.

Anna (Rees) is now a grown woman. She witnessed her mother’s brutal death at the hands of her father, and she now appears to have been possessed by the experience. Each time that she shares any kind of embrace and is subjected to a glitter or bright shimmering light she goes into a trance in which she goes into a homicidal rage. Psychologist Dr. John Pritchard (Porter) is a student of the new theories of Freud’s psychoanalysis. He believes that with attention and care he can cure Anna of her affliction. Of course, he can’t, and before long he becomes somewhat of an enabler to her bloody episodes.

The film works without any of the standard Hammer players. There was originally talk of bringing in Peter Cushing to play Dr. Pritchard, but the decision was made to use a cast that was not quite so familiar to the Hammer audiences. A plus here was the wonderful performance of Angharad Rees as Anna. Truth be told, she doesn’t ever have to do much. The character is rather understated for such a psychopathic killer. The real talent here is that Rees never tries to push the envelope. She remains subtle, and the result is a rather creepy portrayal. It’s in her vacant eyes where the real story is told, and it’s a shame she did not enjoy much of an acting career after the film. Most of her career would be spent on BBC television productions. In fact, Eric Porter  who would play Dr. Pritchard, was also pretty much a television actor most of his life. The cast might have been a bit of a downgrade from previous Hammer productions, but it rather works to set the film a part from the usual monster mayhem that we became used to from The House Of Hammer.

The film is also notable because of producer Aida Young. As a female producer she struggled for respect at Hammer. Even though she brought in several of their films on-budget and on time, she often had to establish her authority over a production. She wasn’t above using her female charms, however. You may notice that Hands Of The Ripper appears to get away with a few more graphic moments than the British censors had allowed on other Hammer films of the time. She would attend the censor screenings with the censor and hold his hand tightly during the “bad” parts. The result was a lot more leeway than perhaps a male producer would have gotten from the board. The film is a testament to her resourcefulness and the ability to take advantage of those standing Pinewood sets to get a film that looks far more expensive than it actually was.

Hands Of The Ripper isn’t really one of Hammer’s best or most known films. It was badly marketed and did not feature any of the expected cast. True Hammer fans, however, now consider it one of the better films of Hammer’s final years. The psychological aspects are really much better than just another Ripper film would have been. It was a bold move that didn’t pay off at the time. Fortunately, we get to enjoy it all through 20/20 hindsight and a pretty solid high-definition release.

Hands Of The Ripper is presented in its original aspect ratio of 1.66:1. The 1080p image is arrived at with an AVC MPEG-4 codec at an average 30 mbps. This high-definition image presentation is a bright and colorful treat. Reds have always been a particularly wonderful color in Hammer films. I’m not really talking about blood here. I’m referring to costumes and drapes. For some reason they have always been very rich and deep in Hammer’s productions. If that’s how you remember it, you won’t be disappointed here. The print certainly shows signs of age in its inconsistent contrast, but there are obvious signs of restoration here, and the print is mostly free of debris and other artifacts. Black levels are better than fair. Perhaps it’s age, but they do, at times, appear a bit too light, and that hurts shadow definition a bit. The original grain appears mostly intact. The sharpness allows you to take in the production design and recognize some of the “borrowed” sets and locations.

The DTS-HD Master Audio 2.0 is mostly there to serve the dialog. You can hear every word. The music and effects have a separate track which I find very interesting indeed. Hammer always had a great foley department, and the audio really picks up the footsteps and such that I have always remembered from the drive-in days of my introduction to Hammer.

The Devil’s Plaything – Possessed By The Hands Of The Ripper: (28:21) This feature not only provides wonderful background on the film but there’s plenty of material on the production people, as well. It also serves as a nice chapter in the history of Hammer itself.

Slaughter Of Innocense – The Evolution Of Hammer Gore: (6:08) This is really a gallery montage.

US Television Introduction: (7:01) Raw audio of a wrap-around story added for American television where a writer talks about the case.

Credit Synapse for bringing to life yet another Hammer classic. Because of the way distribution deals were made and the piecemeal distribution of Hammer properties later, the titles are a bit scattered, falling in various hands. Watch this release and you can only wish that Synapse had a shot at the entire library. I think we’d see more frequent and higher quality films to add to our hungry collections. Many of you have long since strayed from the Hammer traditions, and Hands Of The Ripper might have escaped your notice in the past. “Just hold on to me and I will lead you back.”

Gino Sassani is a member of the Southeastern Film Critic's Association (SEFCA). He is a film and television critic based in Tampa, Florida. He's also the Senior Editor here at Upcomingdiscs. Gino started reviewing films in the early 1990's as a segment of his local television show Focus. He's an award-winning recording artist for Omega Records. Gino is currently working on his 8th album Merchants & Mercenaries. Gino took over Upcomingdiscs Dec 1, 2008. He works out of a home theater he calls The Reel World. Favorite films: The Godfather, The Godfather Part II, The Body Snatcher (Val Lewton film with Karloff and Lugosi, not the pod people film), Unforgiven, Gladiator, The Lion King, Jaws, Son Of Frankenstein, The Good, The Bad And The Ugly, and Monsters, Inc.
Femme Fatales: The Complete Second Season Star Trek: The Next Generation – Season Four (Blu-ray)