Posted in: No Huddle by Archive Authors on August 1st, 2013 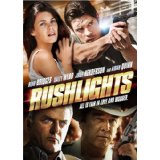 “Treading through the dreadful darkness of the land, I dipped the pith of a rush into the tallow, and soon the rushlights guided me down the somberness, the gloomy flames unveiling this unfamiliar soil.”

These words preface the movie Rushlights, giving it an aura of mystery, history and literary pedigree. What is delivered is a modern film noir that stretches from Los Angeles to Tremo, Texas.

Two acting veterans head the cast, Beau Bridges and Aidan Quinn as brothers who are sheriff and lawyer in Tremo, but the story revolves around a young couple played by Josh Henderson (Dallas) and Haley Webb (Final Destination).

I’ll start by saying that I like the script, which is based on a true story despite that the plot twist start coming often and they become more and more improbable. Sometimes when dealing with true life events that are stranger than fiction, you have to both stress the realness of the source and acknowledge the humorous absurdity of bizarre events careening out of control. Even if these events weren’t a true story, you have treat them as if they were as the Coen brothers have done many, many times. Their individuality and humor elevates the material and gives it an added dimension. Sometimes the writing can be so unique and idiosyncratic that it shines in a different way such as in the case of Quentin Tarentino. I don’t mean to hold a beginning filmmaker to such high standards, because there is a lot here that works. Unfortunately, the approach is so routine and unimaginative that the story doesn’t seem special or believable. If there is one element that stands out as an example of the problem with this movie, it would be with Josh Henderson’s performance. He’s a young pretty boy, and in this movie his deadpan acting comes off as dull. There are times when his reactions are so out of sync with events that it is unintentionally funny. But over all, it’s not that glaring. I just feel there was a lot of potential to take a script full of crazy events and not take full advantage of the inherent humor in the material.

I do believe that the making of a low-budget straight-to-DVD type movie poses some challenges as far as the ability of the producers and director to pull off something of high quality, because there are so many elements out of their control. Overall, I’d say they did a good job, and Aiden Quinn especially has a great time with his part. But so much of the movie is uneven. There are so many things in the script that could have really popped with just the tiniest shift in execution, whether it was in choice of actors or the approach the roles or the tone or the music. Ultimately, everything came off too generically to maximize the potential for fun of this kind of material. I’ve heard too many commentaries to not acknowledge how chaotic the making of a movie can be and how luck plays a strong role in the final film. I think this film is better than a Lifetime movie thriller and not as good as things which it can be compared to that are excellent like Fargo, Blood Simple, No Country for Old Men, Raising Arizona, Red Rocks West or Body Heat. Three of the films I just mentioned are by the Coen Brothers because they have the finesse and know how to pull this sort of thing off and win Oscars.

As far as that opening quote goes, it is not apparent how it ties into the story. So I tried to look it up, and I got absolutely nowhere. In fact, the true story aspect was also not available to be traced, so there are many things that I would like to find out, but I could not. It reminds me of the Coen brothers putting “based on a true story” at the beginning of the movie Fargo and then saying it was a complete lie. If the writers of Rushlights pulled a similar stunt, that would be really funny. I just never saw any indication that they had that kind of sense of humor. Rushlights appears to be a film not that confident or sly that it would play that kind of joke.