Posted in: No Huddle by Brent Lorentson on August 1st, 2013 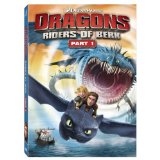 The cartoons I’m most fond of from my childhood are all cell-animated, simply because I grew up in a time before computer generation effects and animation had been fully realized.  Now when you flip on the TV it’s hard to find any true animation; everything has moved on and evolved to CGI.  When the studios have the time and money, they can release some breathtaking features like Finding Nemo and The Croods. But when it comes to television the CGI never seemed to match the quality of the features.  That is until Dreamworks released Dragons: Riders of Berk.

Berk is a land shared by both Vikings and dragons.  For generations the two feuded with one another until a boy, Hiccup (voiced by Jay Baruchel) came along who was able to train the dragons, and since then the two have worked together to cohabitate Berk together.  Joining Hiccup on his many adventures are his somewhat loyal group of friends and their dragons.  But it’s his closest and dearest friend Toothless (a rare night fury dragon) who sticks to Hiccups’ side through the good and the bad.  Their relationship is more than a simple bond between a boy and his pet.  The trust the two share is shown time and time again throughout the series whether through a simple trust fall exercise, to a point where both Hiccup and Toothless take separate leaps from a cliff in the hope the two will come together to escape another dragon.  These leaps of faith are poignant considering Toothless can’t fly without Hiccup in the saddle due to the fact he has an injured tail and has an attachment that only the person in the saddle can control.

In episodes How To Pick Your Dragon and Portrait of Hiccup as a Buff Man (which happen to follow one another in part 1) the two follow the theme most kids can relate to between getting their parents to listen to them and making their parents proud.  For some of those who are thrown into sports to follow in their parents’ footsteps, they’ll possibly see a bit of themselves in Hiccup as he struggles to make his father proud.  After all, his father is the chief of the Viking tribe.  In Portrait of Hiccup… we see Hiccup and the gang attempt to pursue a long lost treasure.  The episode of course has its thrills, but it’s the heart of the episode that I believe most parents or soon to be parents will latch on to.  The struggle Hiccup is willing to go through, at one point even risking death, shows the heart of the character, but it’s Stoick (voiced by Nolan North) who takes a clichéd route with the proud father speech but manages to have it sound fresh and original for once.

There is so much to like in these episodes.  The animation is rich and beautiful.  Whether it’s as we are along for the ride as the characters are swooping through the clouds or watching Berk at the mercy of a lightning storm, the visuals are pleasing to the eye.  As for the dragon designs, I absolutely love them.  I can’t help but want Toothless for myself to fly up to McDonalds and get a McFlurry.  It’s not only Toothless, it’s all the dragons and the detail put into each giving them their own unique look, and though they can’t talk, each dragon stands out from the other on personality alone. For instance when you meet Whispering Death and witness the blood feud between it and Toothless, who cares if this is a kids’ show, that episode was a blast.

As for the characters throughout Berk and the villains that are sprinkled throughout, boy oh boy, did the writers do a good job at planting seeds for things to come.  Alvin the Treacherous (voiced by Mark Hamill…yeah, Luke Skywalker), is such a fun villain with his obsession on trying to obtain Hiccup and the dragon training guide.  You just know he would use the training book for no good, and the thought of seeing a Viking battle in the air while riding atop dragons: perhaps my imagination is getting the best of me, but geez, that would be awesome to see.  Then there is Mildew (voiced by Stephen Root) who is Berks residential curmudgeon who has it in for the dragons.  He hates the dragons having anything to do with Berk and will do just about anything to rid the land of them.

But it’s the relationships between Hiccup, Astrid, Fishlegs, Snotlout, Ruffnut and Tuffnut that drive every episode.  Though they may never see eye to eye and fight more often than they get along, it’s this group of kids and their dragons that keep us watching.  In Breakneck Bog when Hiccup discovers a “monster” is responsible for taking a chest that contains something his mother once made for him, the gang joins together to help get the chest back.  This was simply great storytelling that gets you involved with the characters, and that is more than I’ve seen with most of the animated shows out there.

I can’t possibly recommend this show enough.  It’s fun, it’s exciting, and it has a heavy replay value.  With How To Train Your Dragon 2 coming out in 2014 and Dragons: Defenders of Berk airing in September, I’m glad the wait won’t be long before I can see where these adventures will take us.

Brent Lorentson is a horror writer and film critic based out of Tampa, Florida. With a BA in Digital Film, he co-wrote and co-directed Scavenger Hunt. His short stories have appeared in various horror anthologies. In 2019 his short script Fertile Blood will be a part of the anthology horror film Slumber Party. He is currently working on his first novel A Dark and Secret Place set to be released in late 2019. Favorite Films: Taxi Driver, Fight Club, I Saw the Devil, The Wild Bunch, Dawn of the Dead, A Clockwork Orange, Pulp Fiction, Heathers, The Monster Squad, and High Fidelity.
Rushlights Gunsmoke – The Ninth Season Volumes 1 & 2