Posted in: The Reel World by Archive Authors on August 8th, 2013 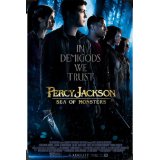 Where do I begin? The first Harry Potter movie and the first Percy Jackson movie were both directed by Chris Columbus, but he moved on in both cases. The other similarities are substantial, and the studio producing the new Percy Jackson movie certainly hopes it can produce a similar success that Harry Potter did for its studio. There are a whole lot of books that are part of an ongoing story. In fact, there is a new series that moves on from Greek gods to Egyptians. That’s right, Greek gods, but not like in Clash of the Titans which takes place so many years ago in olden days. Percy Jackson is right up to the present, and Percy Jackson is a half- blood prince, son of Poseidon. The first movie, Percy Jackson and the Olympians: The Lightning Thief, brought us into the crazy world of satyrs and cyclops and other creatures not entirely human.

Before I finish with Percy, I should discuss Young Adult books. There are more and more, and they are all trying to cash in on Harry Potter mania, and they are all probably going to be made into movies. The Hunger Games is another YA series that has developed a strong audience filling the gap left by Twilight. Divergent is coming, as is The Mortal Instruments. The problem is that if I tried to list all the YA projects likely to head to a theater near you it would be mind-numbing. In other words, Sea of Monsters better hit big, because the competition is heavy. Some popular series only got one shot like the recent Beautiful Creatures and The Golden Compass and A Series of Unfortunate Events. The first Percy Jackson box office results were only OK, but it has been given another chance.

I’m not sure it deserves it. Part of the problem is whether the characters will appeal to adult audiences. Logan Lerman is appealing as Percy as is Alexandria Daddario as Annabeth, the half-daughter of Athena. Still, the overall chemistry has not kicked in, and their characters still seem to float in a sea of events. Grover, a satyr, is the third wheel in the relationship and something of a comic relief, much like in the Potter series. But, the layers and levels of intensity that Harry Potter had are not showing up in these films. It’s a shame, since the fans really love the books and there has been a lot of grumbling about the first film. That is also the typical problem: satisfying the fans of the books. They will always be judgmental about any changes.

This film is also doing without Uma Thurman, Pierce Brosnan, Sean Bean and a slew of other stars from the original film but does get a nice cameo by Nathan Fillion as Hermes running a supernatural delivery company. Stanley Tucci plays the egotistical head of Camp Half Blood, and his character is not much more appealing than his appearance in The Hunger Games was. Adults are not to be counted on in these types of movies. They are often an obstacle. The villain in the piece is Luke, who was Percy’s friend but always seems to be driven by dark ambitions. In this film, Luke wants to raise Chronos who is locked away in the depths of the ocean.

The climax of the film is its most effective showcase since earlier forays with a giant cyclops and sea monsters generally fizzle. If the fans of the book are any indication, something is missing in translating these films to the screen. It is all in the details.

If I were doing it I would definitely worry less about CGI, because it’s a skill that few filmmakers (Peter Jackson!) get right and focus more on making the characters more intimate and connected. Treat the characters with respect. As a not-so-young adult, I want to see all my characters, young and old, be real and fully fleshed out and fully dimensional even if it is in a fantasy setting. I don’t want them to be just chess pieces in a green-screen computer-generated world. I’m not saying that Percy Jackson doesn’t have great potential. I’m just saying this may have been their last chance to achieve that goal. In a sea of monsters, I would like some of them to be interesting.