Posted in: Disc Reviews by Gino Sassani on August 8th, 2013 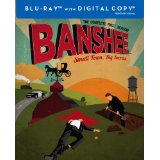 “With a name like Banshee how can you not be drawn in?”

Alan Ball got my attention in 2001 with HBO’s black comedy Six Feet Under. It was one of the most original shows I had ever seen, and to this day I find it hard to characterize the series when asked to do so. It was there that he also introduced me to Michael C. Hall, who continues to amaze me in the role of Dexter over at Showtime. When Six Feet Under left the airwaves, Ball didn’t waste very much time in bringing his quirky style back, this time to the horror genre. True Blood would put a rather strange twist on the lovesick vampire craze, and while that show has not kept up the same kind of clever writing and wickedly brilliant stories, Ball has lent his name and talents to another cable show. This time it’s on Cinemax, and the series is Banshee. And while Ball is a producer and not the day-to-day runner of the series, it is nonetheless another pretty strange show that defies any particular genre or characterization.

Lucas Hood (Starr) is the sheriff of a complicated small town in Eastern Pennsylvania. OK, first of all, Lucas Hood isn’t even his real name. He’s an ex-con on his first day of freedom looking for his lover Ana (Milicevic) and partner in crime. He’s tracked her to Banshee with the help of another criminal associate Job (Lee). Job’s a transvestite who’s wickedly good behind a computer. Those skills are going to come in handy, because Lucas’s first stop in Banshee is a bar run by a former boxing champion Sugar (Bates). That’s where the real Lucas Hood was stopping by for a steak on his way to taking that sheriff job. He gets killed when the place gets held up. Sugar needs to hide the bodies, because they work for local mob kingpin Kai Proctor (Thomsen). And since it appears no one in town has ever actually met Lucas Hood, our ex-con decides to assume his identity. If all of that sounds pretty complicated, if you’re lost already, let me tell you that I’ve only described the first ten minutes of Cinemax’s show Banshee.

There are a lot of other players involved. Ana now has a family and has been hiding from both Lucas and a Greek hood named Rabbit (Cross). Rabbit happens to be her father and the guy she and Lucas stole a ton of diamonds from. That’s how Lucas ends up in prison. Needless to say he’s looking for them both.

Banshee itself is an interesting “small” town that isn’t really in Pennsylvania. The show is filmed mostly in North Carolina. In Banshee you have the aforementioned Kai who runs most of the town. The reason a new sheriff was being recruited outside of Banshee was that Kai is good at buying sheriffs wholesale. That means Lucas also has to watch out for Deputy Brock Lotus (Servitto) who thought the job should have been his. The town also borders an Indian reservation which has a casino that Kai has managed to muscle himself into, much to the irritation of young Alex Longshadow (Ruivivar) the son of the ailing Chief. The town is also home to a thriving Amish community complete with their horse-and-buggy lifestyle. It’s a lifestyle that Kai himself escaped from. Throw in your typical crooks and even a motorcycle gang and you begin to suspect that Banshee is not your typical small town after all. Just what you would expect from a series that Alan Ball is associated with.

If you like action, the series does not disappoint. Lucas has had to train himself while in prison because Rabbit was always sending guys to hurt him. He’s learned to fight, and his punch (or shoot) first and ask questions later reactions are getting him noticed with suspicion by Brock and a visiting FBI agent. Let’s just say he isn’t going to be a by-the-book law enforcement officer. Expect a ton of fights and plenty of bloody action.

You can also expect some of the most complicated character relationships you’ll find in television. That’s great to an extent. The problem is when you try to jam all of this into a ten-episode season. To say the show moves fast is an understatement. I still don’t completely understand where everyone fits together. It’s an ambitious show that also stretches credibility to the limits. Lucas is faking this cop thing, but he’s getting noticed almost without care. It’s a miracle it takes Rabbit so long to track him down. Of course, it doesn’t hurt that Ana might be willing to turn him over to try to protect her own family. It also doesn’t help that Lucas is still pulling huge jobs on the side. At one point he almost gets caught in a museum in Harrisburg. You just have to accept the wink and the nod and merely go along for the adrenaline ride. It’s all you can do.

And the adrenaline ride is addictive. No matter how unbelievable the show got, I still couldn’t wait to see what happens next. The show attempts to take a comic-book approach to the storytelling, and while this is not based on any established graphic novel, it feels like it is. And, of course, the comics have already begun to follow.

The production values are solid, and the series does provide a very cinematic atmosphere. All of the actors are pretty solid. Ben Cross is outstanding and very seriously underused. The chemistry isn’t exactly there, but that has more to do with the way these relationships change from episode to episode. The series is graphic both in the action and sexual content. The sexual content is a bit odd. During those encounters the style gets in the way. The scenes are not linear. You’ll see someone approach a woman at a bar. Next thing you know they’re going at it, but seconds later we’re back to the introduction again. It’s the only stylish fault I have with the show, but it can be a huge one. Someone’s trying to be clever and pretty much outwitting themselves.

If you like stability in your story or characters, this one will not work at all for you, be warned now. If you can go the extra mile in suspension of belief and you don’t mind the relationship instabilities, the show certainly knows how to entertain.

Each episode is presented in its original aspect ratio of 1.78:1. The 1080p image is arrived at with an AVC MPEG-4 codec at an average 35 mbps. The high-definition image presentation is quite cinematic. It’s very hard to judge the actual quality. The filmmakers do a lot of different styles and filming techniques that highly vary things like sharpness, texture and particularly color. You have to get used to the storytelling here and learn which styles mean what things. Within that framework, I’d say we’re getting exactly what is intended.

You get six commentary tracks and a couple of deleted scenes.

Inside The Title Sequence: The titles for each episode are different. They use symbols and photos to tell a mini-story, which is in turn connected to the episode. These pieces allow you to access the symbol info during the sequences. Appropriate images will appear with a red ring. When you see the ring you hit enter on your remote and get the inside scoop.

Town Of Secrets: (3:54)  It’s on the first disc but shows clips that could be considered spoilers. Cast and crew discuss various elements of the show.

The only thing you learn to expect from this show is to stop expecting anything. The show has its own pace and its own reality. You have to just go with it. There’s never a dull moment, and it’s the kind of show that I suspect will lead to more discoveries on additional viewings. Hood isn’t keeping a low profile. He’s obviously welcomed the coming confrontations. “So do I.”

Gino Sassani is a member of the Southeastern Film Critic's Association (SEFCA). He is a film and television critic based in Tampa, Florida. He's also the Senior Editor here at Upcomingdiscs. Gino started reviewing films in the early 1990's as a segment of his local television show Focus. He's an award-winning recording artist for Omega Records. Gino is currently working on his 8th album Merchants & Mercenaries. Gino took over Upcomingdiscs Dec 1, 2008. He works out of a home theater he calls The Reel World. Favorite films: The Godfather, The Godfather Part II, The Body Snatcher (Val Lewton film with Karloff and Lugosi, not the pod people film), Unforgiven, Gladiator, The Lion King, Jaws, Son Of Frankenstein, The Good, The Bad And The Ugly, and Monsters, Inc.
What Maisie Knew (Blu-Ray) Percy Jackson Sea Of Monsters