Posted in: The Reel World by Archive Authors on August 9th, 2013 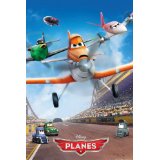 For adults with kids, there is a great need for animated films to make the family happy. For movie studios, there is a great need for films that the entire family can go to that are not slapped with an R-rating which cuts down on profits. Two recent films recently made films about races, Planes and Turbo, showed a need for speed. More and more, the glut of these movies shows the need for greed. Greed is what makes studios only think about making money and not good movies.  I actually did like both Planes and Turbo, which is strange because I absolutely hated Cars 2, which was also a race movie.

Planes is a sequel to Cars, which is odd since it wasn’t produced by Pixar but Disneytoons which normally produce a heavy slate of straight-to-video fare. Early reception generated plan to make two more Planes films. Planes takes the world wide race that was tried in Cars 2 and makes it more visually entertaining. One of the most interesting things when watching one of these movies is figuring out the vocal talent. Here the names are not A-list stars, but they serve well. They are Dane Cook, Stacy Keach, Cedric the Entertainer, John Cleese, Teri Hatcher, Julia Louis-Dreyfus, Brad Garrett and Carlos Alazraqui. I know. I’ve never heard of Alazraqui either, but he does a dead-on imitation of Antonio Banderas as Puss in Boots. The visuals are the key here. The swooping vistas of flight are always exhilarating. It is still put in the framework of an overly familiar story of a downtrodden underdog.

Turbo took that underdog idea to ridiculous extreme by having a snail receive an incredible gift of great speed. Not just doubling his speed but increasing his speed a gazillion times, enough to compete in the Indianapolis 500. Yes, a snail competing against high powered race cars. Is it possible to think of a more absurd premise? Then they add fun elements like a taco stand as a sponsor and a bunch of rowdy snail mentors. Overall, Turbo was surprisingly entertaining.

I’m not spending much time talking about Planes, partly because there is such a glut of these movies and they are so routine and generic that I find it more interesting to talk about the glut. Monsters University is a perfect example. The movie was dreadful, and yet it was from Pixar, supposedly the gold standard of animated films. It didn’t surprise me because it was directed by John Lassiter, the founder of the studio and always its weakest link. His films always bore me. I know that might seem shocking to some people: that someone would ever say anything bad about Pixar. Some are wonderful (especially Ratatouille) but Lassiter seems to always be stretched to thin. Yet Monsters University was extremely successful, so clearly it doesn’t matter if something is good or not as long as it’s pre-sold. The movie Monsters Inc. was a huge success, so naturally a sequel is in order. Pixar is suppose to be a place of quality, but commerce is like a vine strangling it’s creativity. They shouldn’t do a film unless it’s original and wonderful, as many of their films are. And now they are farming out their spin offs to a bargain basement Disney subsidiary. For shame, Pixar.

I like any movie as long as it’s good. I have no problem with animated films for kids as long as they are passionate and inspired. Another entry this year was The Croods, and it was very original and very enjoyable on every level. Still, then you have to deal with things like Smurfs 2; ugh.

Planes is a sequel to Cars, yet it’s not by Pixar. How can it not be confusing to the lover of movies? I suppose it doesn’t matter to those who aren’t movie lovers. For some people, It’s just a way to get their kids off their backs.

We’re the Millers Strike Back: The Complete Second Season (Blu-ray)