Posted in: Disc Reviews by Gino Sassani on August 9th, 2013 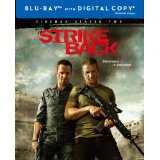 “If you want to achieve something, you’ll find a way. If you don’t, you’ll find an excuse. And we’re all utterly sick of hearing excuses.”

There are no excuses when it comes to Cinemax’s Strike Back. Finding a way is exactly what this team does and what this series is about. These guys can shoot it out with about 200 terrorists and come out with barely a scratch. We’re talking action of the highest order. And that was just season 1. Wait until you find out what these guys are up to in season 2. Regulars won’t survive, and a lot of bad guys are going to get killed.

Strike Back follows the exploits of an elite and secret British military team called Section 20. On paper they do not exist, but they’ve got all the best new high-tech toys, and they’re going to need every one of them. They’re going after the top terrorist threats. They combine the intelligence gathering network of a CIA-type organization with the precision strike force impact of a top Navy Seals team.

The series is quite compelling. On the surface it appears to be one of many recent shows that deal with tracking down terrorists. Since 9-11 there’s little doubt that the radical extremists have become Hollywood’s favorite bad guys. The field has become so crowded between feature films and television shows that it’s going to be very difficult for any one show to set itself apart from the pack. I have to say that Strike Back does just that. The show strikes just the right balance between action and drama. The characters become rounded out in a hurry, and we become attached to them rather quickly. The action doesn’t take us so over the top that our characters appear to be practically indestructible. They don’t always win the battle, and the scars are part of the process. These guys don’t have any superpowers; they’re just very good at what they do.

There’s some real talent in the cinematography and editing. You get the sense that you’re boots-on-the-ground during the action. The camera takes you to eye level, and the production values are high enough to sell it all. Need a breath? You get one when the characters do, and the show can actually feel a bit fatiguing at times. It’s obvious how much more an organization like Cinemax can bring to this kind of series that network productions just can’t match. You couldn’t do this on NBC or the others, and it would be best they not even try. The closest I’ve seen to this kind of show was The Unit, another very good show that did appear on network television. But even The Unit couldn’t touch this kind of action. Fans of that show will particularly love this one. It’s what that show would’ve been with this kind of a budget.

Cinemax tells us a little about this season’s main characters:

Damien Scott is a former Delta Force commando whose confidence with a weapon is matched only by his way with women. His cocky style is often at odds with his more staid colleagues, but he always gets the job done.

A clear-thinking and reliable soldier, Sgt. Stonebridge brings strategic clout to Section 20. He and his wife Kerry are the picture of a perfect couple, but there’s more going on in his family life than meets the eye.

Captain Oliver Sinclair is Section 20’s chief intelligence officer, responsible for the logistics and management of the entire team and the high-tech mobile unit known as the crib. In all day-to-day operations, he is Colonel Grant’s right-hand man.

Sergeant Julia Richmond is Section 20’s chief communications officer, responsible for maintaining contact with agents in the field and all other relevant transmissions. She is exceptionally bright, technologically adept, and proficient in several languages.

As the second season begins there are some cast changes to report. Anyone who saw the first season knows that Col. Grant isn’t returning. In her place we have an even stronger character and actress. Rhona Mitra joins the team as new leader Maj. Rachel Dalton. At first she’s the latest mission. Scott has a trio of hostages taken right from under his protection, and he’s out to get them back. One of those is Dalton, who has a history with the intelligence community. Her “need to know” style is going to cause some new conflicts with Scott and the team. She soon takes over the leadership position, but that doesn’t mean she can’t handle herself in the field.

Mitra plays a wonderfully complicated character here. She starts out a little weak, and I was beginning to have some second thoughts about the casting choices. Give it time, and you’ll be so glad you did. She has this subtle style that takes a bit to grow on you. There’s a particularly wicked scene in the end of the season where she’s delivering some shots with a pretty big gun. At one point she scores a take down and delivers just this quick hint of a smile or grin. It’s over in a flash, but it says everything about the acting style and character being portrayed here.

Most of the action this season happens in South Africa. There are some missing nuclear triggers that end up floating around throughout the season. They end up in the hands of one bad guy to the next. They even slip in and out of Section 20’s hands from time to time. This is the focus of the storyline for the season.

While there are a few bad guys this time around, our main villain is Conrad Knox, played quite well by Charles Dance. He’s a wealthy globalist who runs a foundation through his wife that appears to be about global disarmament. In reality he has a plot to make South Africa a nuclear power to be feared. He wants to force the continent on the world stage. It’s the kind of bad guy who doesn’t really see himself as evil, and isn’t that the best kind of all? He almost has noble ambitions, but his methods mean potentially millions of lives. He’s the kind of guy with money and political power. He has friends in low places and is willing to die for what he believes. It’s a pretty solid season-long story with a satisfying end.

There’s no sophomore slump to be found here. Everything is improved upon from an already pretty solid first season. The characters are even stronger with better chemistry. No one is safe, either. You can count on the season ending with at least one or two unexpected deaths. The good guys don’t win every showdown and that keeps a sense of reality going in what is otherwise a super-intense action drama. When it comes to Strike Back, “diplomacy is overrated”.

Gino Sassani is a member of the Southeastern Film Critic's Association (SEFCA). He is a film and television critic based in Tampa, Florida. He's also the Senior Editor here at Upcomingdiscs. Gino started reviewing films in the early 1990's as a segment of his local television show Focus. He's an award-winning recording artist for Omega Records. Gino is currently working on his 8th album Merchants & Mercenaries. Gino took over Upcomingdiscs Dec 1, 2008. He works out of a home theater he calls The Reel World. Favorite films: The Godfather, The Godfather Part II, The Body Snatcher (Val Lewton film with Karloff and Lugosi, not the pod people film), Unforgiven, Gladiator, The Lion King, Jaws, Son Of Frankenstein, The Good, The Bad And The Ugly, and Monsters, Inc.
Planes Elysium