Posted in: No Huddle by Brent Lorentson on August 20th, 2013 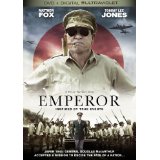 The moment I see the words “inspired by true events”, I simply accept the fact that most likely everything that follows should be taken with a grain of salt.  I understand films are not meant to be reference materials to be seen as fact, but simply as a tool to entertain and hopefully motivate you to learn more about the subject matter.  When it comes to Emperor, I know going in this isn’t going to be a history lesson, so I could allow myself to simply enjoy the show.

In the days following Japan’s World War 2 surrender, General Douglas Macarthur (Tommy Lee Jones) is given ten days to decide the fate of Japan’s emperor through an investigation that will uncover his innocence or guilt of committing war crimes.  Heading the investigation is General Fellers (Matthew Fox) who happens to be an expert on the Japanese culture.

Understanding there are only ten days to make a decision, Fellers wastes no time on jumping into the investigation.  Fellers understands that the people of Japan don’t simply view the emperor as a man; he is given the reverence of a higher deity, and the people will defend their leader at all costs.  Even with this added pressure Fellers can’t help but also use this time to pursue the love of his life Aya (Eriko Hatsune), an exchange student he met in college just prior to the start of the war.  These separate investigations are deserving of films all to themselves and reflect the heart of General Fellers who understands the importance of his investigation, but the need to know the fate of the woman he loves motivates him most of all.

Looking at the cover and viewing the trailer, yes, you’ll be led to believe this is all about the impending fate of the emperor, but instead we are given a story that is more engaging and moving.  Fellers loves this woman in a way we don’t see too often in films anymore.  This is about a forbidden love that endures beyond all that stands in the way, even surrounded by so much hostility the two manage to see the purity and good in one another that transcends simple lust or cultural hatred upon the cusp of war.  This is a love story you want to root for; you want them to overcome all the obstacles, hatred and violence that surrounds them, but you understand how foolish this notion is.

The love story is told in flashback as Fellers struggles with his investigation, and I’m left to question if his desire to find the emperor’s innocence and protecting him from execution is not driven by his desire to discover Aya’s fate.  If he is able to save Japan’s deity and ruler, in turn could this preserve the life of the woman he loves?

Sure, a lot of attention is going to be given to Jones for his performance as Macarthur.  Jones is as good as ever and is a perfect fit to play the famed General.  But Fox steals the film for me.  Since Lost he’s been an actor I’ve enjoyed watching and hoped would manage to make the leap from television actor to film star, but that seems to be a hurdle he hasn’t managed to cross yet.

Between the engaging performances and the solid script, director Peter Webber delivers a tight little story about honor and compassion.  Hopefully this film can find an audience on DVD, because it deserves a better run than it got.  I’m not certain how accurate the story is that is being told, but it managed to keep me engaged to the final frame.

Brent Lorentson is a horror writer and film critic based out of Tampa, Florida. With a BA in Digital Film, he co-wrote and co-directed Scavenger Hunt. His short stories have appeared in various horror anthologies. In 2019 his short script Fertile Blood will be a part of the anthology horror film Slumber Party. He is currently working on his first novel A Dark and Secret Place set to be released in late 2019. Favorite Films: Taxi Driver, Fight Club, I Saw the Devil, The Wild Bunch, Dawn of the Dead, A Clockwork Orange, Pulp Fiction, Heathers, The Monster Squad, and High Fidelity.
Revenge: The Complete Second Season Amazing World of Gumball 3: The Party