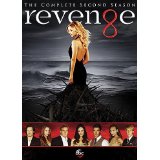 The first season of Revenge was soapy perfection. I’m not saying it belonged alongside the great, ambitious television series of our time. But in terms of sheer entertainment value and ridiculously delicious (or is it deliciously ridiculous?) gotta-see-what-happens-next-week drama, the debut season of Revenge was as good as it gets. Unfortunately, season 2 is, by comparison, a disappointing slog. By the time the smoke from the explosive two-part finale cleared, Revenge had lost its creator/showrunner and become the latest poster child for the sophomore slump on TV. (NBC’s Heroes was more than happy to pass that baton.)

“Tell yourself what you have to, but when will enough be enough?”

Writing a network television drama is one of the trickiest gigs around. Not only do you have to produce 22 to 24 hour-long scripts each year, but it’s pretty much the only medium where the writers have no idea when their story is going to end: it could be after five episodes, or it could be 100. (At least cable dramas tend to get picked up for full seasons.) Revenge creator/showrunner Mike Kelley departed the show toward the end of the underwhelming second season as reports surfaced that he consistently clashed with ABC about the show’s episode order: Kelley reportedly believed the show would be better served with a cable-ready 13 episodes, while the network understandably wanted to produce as many episodes of its new hit as possible and insisted on 22. That strain really began to show in season 2.

Revenge — inspired by Alexandre Dumas’ “The Count of Monte Cristo” — is the story of Emily Thorne (Emily VanCamp), a wealthy young woman who arrived at the Hamptons one summer and proceeded to stealthily rock the lives of the rich and powerful. What they don’t know is that her real name is Amanda Clarke, and that she is hell-bent on exacting revenge on everyone who betrayed her father (guest star James Tupper, in flashbacks) and framed him for a heinous terrorist act he didn’t commit. Emily is particularly keen on destroying the devious and regal Grayson family led by Victoria and Conrad Grayson (Madeleine Stowe and Henry Czerny.)

At least that’s what the show used to be about. What I just described above is a relatively simple story of retribution that Kelley and Co. spiced up with well-placed twists and turns throughout the first season. By the time the season 1 finale rolled around with its multiple cliffhangers, the show had a lot of creative balls in the air; unfortunately, season 2 wasn’t able to stop them all from crashing into the ground.

Season 2 actually opens the same way the pilot started. We flash forward to a Labor Day calamity, only this time there’s a dead body at the bottom of the ocean. The action then jumps back three months earlier as we deal with those season 1 cliffhangers. Charlotte (Christa B. Allen) Grayson Clarke is in drug rehab after surviving a prescription drug overdose. Even less surprising is that her mother Victoria emerged from her apparent plane explosion unscathed. (Stowe is the show’s top-billed star, so they weren’t about to kill her off after one year; this ain’t Game of Thrones.) Jack Porter (Nick Wechsler) — Emily’s sweet-natured boyhood crush — is attempting to start a family with pregnant girlfriend Amanda (Margarita Levieva), the woman who switched identities with Emily and is pretending to be “Amanda Clarke.” Meanwhile, Emily’s ex-fiance/Grayson prodigal son Daniel (Josh Bowman) is now dating Emily’s opportunistic former friend Ashley (Ashley Madekwe).

As for Emily, she has returned to Japan for more “revenge schooling” under master Takeda (Cary-Hiroyuki Tagawa taking over the role originated by Hiroyuki Sanada) and reconnected with fellow revenge student Aiden (Barry Sloane). She eventually returns to New York and reunites with friend/confidante/surrogate brother Nolan Ross (Gabriel Mann) to track down her mother Kara Clarke (guest star Jennifer Jason Leigh) after finding out she was still alive in the season 1 finale.

As you can see, there’s a heck of a lot more going on than one woman’s single-minded mission of vengeance. The first few episodes of Revenge were a procedural-like affair that had Emily taking down a different target each week (and marking them off with her trusty red Sharpie). The inaugural season smartly deviated from that rigid structure at just the right time by having moral and other complications (including Grayson-wannabe Tyler Barrol) emerge for Emily. The second season doesn’t really give the viewer a chance to get grounded. So instead of seeing exactly how Emily — and those she loves — become entangled (and endangered) by her search for payback, this season starts with all the major players already helplessly caught in the middle of her figurative spider web.

Put more simply, season 2 is a lot more complicated and a lot less fun than season 1. The biggest perpetrators were storylines involving a vaguely threatening corporation known as The Initiative that made the show feel like a poor man’s version of Alias. There was also some agonizing dock drama involving the Porter Bros. facing off against a pair of vengeful siblings that made the show feel like a homeless man’s version of On the Waterfront. Part of the reason I enjoyed season 1 so much was because even the stuff that didn’t work — like Connor Paolo’s accent as Declan Porter — was fun to make fun of. These two storylines, meanwhile, take up a significant chunk of season 2 and leave the viewer alternately confused or bored.

There are also some significant character downgrades between the first and second season. Jennifer Jason Leigh is a great actress, but her unhinged intensity was a poor substitute for Tupper’s warmth as Emily’s go-to paternal figure. Leigh’s intensity also clashed with the drama’s frothy sensibility. (Ashton Holmes, on the other hand, brought snark and charm to go along with his own unhinged intensity as Tyler during the first season.) Speaking of Tyler, he was an infinitely more fascinating love interest for fan-favorite Nolan than either of this season’s offerings: dueling CFOs Padma (Dilshad Vadsaria) or Marco (EJ Bonilla). Heck, even the new Takeda wasn’t nearly as cool as the original one! At least Ashley remained as useless as ever, so audiences got some consistency. And, to be fair, Sloane made for a debonair presence; even if the Brit whisper-mumbled too many of his lines.

Fortunately, there are other encouraging signs of life within the show. Season 2’s “event” episodes — a Thanksgiving flashback to 2006 (Ep. 8/”Lineage”), the two-part Labor Day tragedy (Eps. 13-14/”Union” and “Sacrifice”), and the two-part season finale (Eps. 21-22/”Truth: Part 1 and 2) — all clicked. The Thanksgiving flashback, in particular, was a major improvement over the time-wasting season 1 flashback ep; “Lineage” actually illuminated the past and set the stage for future storylines. The show also became more playfully meta, usually in the form of Nolan’s dialogue: “Having Conrad arrested for murder at his own wedding; that’s an All-Star Revenge opportunity” or “This one time at Revenge camp…” (Mann continues to steal every scene he’s in.) Although the storylines may have became muddled, the acting mostly remained strong. I continue to be impressed by VanCamp’s underrated, poker-faced work, and Stowe maintains her easy command of withering one-liners. (The scenes between Emily and Victoria are an electric, passive-aggressive delight.) Wechsler and Bowman continue to play gullible dolts, but at least watching Jack and Daniel engage in their own revenge games is amusing because they’re comically inept at it.

More importantly, Revenge displayed a willingness to course correct throughout season 2. It’s no coincidence that Kara Clarke doesn’t return after vanishing in Ep. 7/“Penance.” (Revenge isn’t shy about bringing back characters people want to see, like Roger Bart’s dandy Mason Treadwell.) Also, the finale swiftly and refreshingly does away with The Initiative. (I wouldn’t be surprised if the word “initiative” was banned from the writers’ room in season 3.) Season 2’s final episode also delivered a handful of jaw-dropping moments: a surprise pregnancy, the shockingly affecting death of a regular character, Victoria coming face-to-face with someone from her distant past, and Emily opening up to a loved one like never before. And, to the surprise of no one, Ashley remained utterly useless.

New showrunner Sunil Nayar has taken the reigns, and ABC Entertainment president Paul Lee has stated the show will be “slightly less complicated” going forward. (Here’s some free, uncomplicated advice: the show is 100 times better when the villains are Victoria/Conrad instead of some faceless corporation.)

The season 2 DVD set presents all 22 episodes on five discs. I said some very harsh things about the DVD video quality of the season 1 set, so I feel compelled to commend this second season DVD set for noticeably improving the visual presentation. (I still really wish ABC would release this glamorous-looking show on Blu-ray so fans could enjoy it in its high definition glory.) Special features include deleted scenes, a few commentaries, a cheesy book trailer for “Schooled in Revenge”, and featurettes on composer iZLER and Ashley’s wardrobe. I have slightly higher hopes for Revenge after its killer season 3 teaser and news that it will shed excess baggage from its cast. Shows like Heroes never recovered from their sophomore slumps, but “there are two paths to revenge: one is failure, the other will set you free at your journey’s end.”