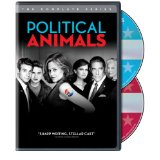 Sigourney Weaver running for the presidency? Come on, I can’t be the only one who saw that coming. No, no just joking; Mrs. Weaver herself is not running for president, but she played someone who did on TV. I am of course referring to the USA Network miniseries Political Animals, where she stars as Elaine Barrish, the former First Lady and current Secretary of State. Filled with crisis after crisis, scandal after scandal, the six-part miniseries delves into the personal and professional lives of its characters, leaving no stone unturned and no secret untouched.

The series starts off depicting the end of former First Lady, Elaine Barrish’s failed presidential run. Moments after delivering her concession speech, she tells her philandering husband, former 42nd President of the United States Bud Hammond (Ciaran Hinds) that she wants a divorce. Fast forward two years; many things have changed; Elaine now serves as the Secretary of State to the very man she ran against in the Presidential Primaries, President Paul Garcetti (Adrian Pasdar); her former husband has been raked over the coals for infidelities and has now gone from beloved public figure to political pariah. During their marriage, Elaine was considered a cold and calculating political animal, and afterwards, her approval went through the roof. Her divorce as well as her decision to serve alongside the man who beat her has been the cause of much political speculation, with one question on everyone’s mind: Will she make another run at the presidency?

Susan Berg (Carla Gugino), a Pulitzer Prize-winning journalist who made a name for herself covering reports about Elaine’s extramarital affairs during his time office; a woman who Elaine personally had barred from the White House, is determined to be the first to the break the story through any means necessary, a fact proven when she manages to obtain evidence of a highly secret event that occurred a year earlier involving Barrish’s openly gay son, T.J.; Berg uses the information as leverage for an even bigger story: unfettered access to Madame Secretary during Barrish’s son’s and Chief of Staff  Douglas’ (James Wolk) engagement week. Forced into corner, Elaine is convinced Douglas convinces her to allow Berg access. During her time, Berg witnesses Barrish handle everything from a hostage crisis to seeing her ex-husband for the first time during her son’s engagement party, all the while ducking the question she most wants answered.

Politics; that thing you aren’t supposed to discuss at the dinner table, has always been (and will forever be) a cornerstone of television programming, and Political Animals highlights the best and worst parts of the subject. Plus side, the miniseries accomplishes a great deal with such a limited run; only six hour-long episodes, I know series that don’t seem to get as much done with 21 episodes (not naming names). Well-written and multi-layered in the subject of how our country handles crises, the series cleverly illuminates the many different channels the government pursues to reach resolutions without causing international incidents such as is the case when Barrish sends her ex-husband as overseer to secure the release of hostages from a hostile region.

The relationship between Weaver and Gugino is the main focal point of the series, with the two starting out as adversaries but coming to grudgingly respect one another by the conclusion of the pilot; this relationship is not the best aspect of the series in my opinion; there are a few characters’ performances that outrank it. First is definitely Stan’s performance as the openly gay troubled son; Stan is able to take the role and tailor-make it for himself, and the interactions between him and Ellen Burstyn as his grandmother are a goldmine. Hinds lived the role of the 42nd President; he’s arrogant, he has an inflated sense of purpose despite being bashed by the public, and there is real chemistry between him and Weaver. Last but not least, of course, is Sigourney Weaver’s solo performance; from the moment she steps on screen Weaver had my vote before officially announcing her candidacy. Weaver perfectly captures the duality of being a politician: who you are in public and who you are with your family. She struggles in both worlds but does her best not show it in public, the way you would expect her to.

The series includes a number of cliques as well that have become synonymous with political thrillers such as the son that struggles with addiction and the philandering husband, whose antics create scandal. Despite that, Political Animals remains a refreshing and welcomed political thriller. Though it is true that series was cancelled, I ultimately believe it will be for the best; it had an exceptional run. Its brilliant writing and character relationship will ensure its place in history, and truth is, everything that encompassed the series importance came in the final minutes in the conversation between Weaver and Hinds.

Jeremy Butler is a film school graduate of the International Academy of Design and Technology. He is been writing for Upcomingdiscs since 2012; however, movies have played a big part of his life for much longer. Favorite genres include horror, science fiction/fantasy, and comedy. Favorite movies are V for Vendetta, Boondocks Saints, Kiss Kiss Bang Bang, and The Godfather.
You’re Next Star Trek: Enterprise – Complete Second Season (Blu-ray)