Posted in: Disc Reviews by Gino Sassani on August 23rd, 2013 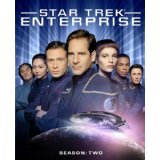 Thirty-five years to be exact. Enterprise is the fourth spinoff from the original 1960’s hopeful series. The Earth is finally ready to send its first starship to explore the vast galaxy. This first starship Enterprise is smaller than the ships we’ve become used to. There are no shields or photon torpedoes. The transporter has only been cleared for inanimate objects. Not that this stands in the way of its occasional “emergency” use. The ship is very much like the cramped spaces of today’s submarines. It adds an even greater sense of reality to the show. The crew is composed of Captain Jonathan Archer (Bakula), First Officer and Vulcan High Command liaison, T’Pol (Blalock), Chief Engineer Charles (Trip) Tucker (Trinneer), Tactical Officer Malcolm Reed (Keating), Denobulan Dr. Phlox (Billingsly), Pilot Travis Mayweather (Montgomery) and Linguist/Communications Officer Hoshi Sato (Park).

With no Prime Directive to stand in their way (did it ever stop anyone before?) this crew has carte blanche to discover the wonders of the cosmos. Most of this season finds the crew battling new enemy, the Suliban. (Can anyone say Taliban?) A Temporal Cold War is also introduced that places the crew in the middle of factions from the future.

In the second season the series did really find its legs. We start to get more of the episodes designed around the characters’ personalities and the relationships they share. There are some significant Star Trek mythology moments here.

Stigma: This was an obvious AIDS analogue. T’Pol has contracted a disease from her forced mind meld in season 1. The disease is usually only contacted through melding, which is considered a socially unacceptable behavior. The Vulcan High Command wish to remove her from service unless Archer can convince her to tell them the meld was forced.

First Flight: Keith Carradine makes a notable guest star as AG, Archer’s rival to command the first warp 5 ship. It has a Right Stuff feel, and I had always wished the show would spend more time in the struggle to get the ship going. The series would always hint at it, but this was the only episode to truly explore the idea. I’ll have to give credit to Braga, who did initially want the first half of the first season to be about the events leading up to the launch of Enterprise. I think this episode proves what a good idea that might have been.

A Night In Sickbay: This is one of those episodes you either love or hate. I loved it. It’s a bottle show, to be sure, and intended to get caught back up on the season budget. Still, it’s the kind of episode that the Stargate franchise did extremely well, and Trek always had the potential to do. The captain’s dog has picked up an infection on an away mission, and Archer spends the night in sick bay to be with his buddy. It’s an intimate episode with few effects and no real action sequences, unless you count chasing down a bluish bat.

Minefield: This episode includes the first human encounter with the Romulans. As much as this show often ignored Trek mythology, give credit here that the crew never actually see a Romulan during the encounter. This is important because when Kirk’s crew finally do see the Romulans it’s mentioned no one has ever seen one. Unfortunately, the reason given there was that ships of that time had no viewscreens, but Enterprise would have been much less exciting, at least visually, without a viewscreen. This is also a good Reed story. He gets trapped on the ship’s hull trying to deactivate a Romulan mine.

Cogenitor: The Enterprise encounters a friendly race of aliens. Archer and the captain get along great. The captain is played by Andreas Katsulas, who many Trek fans will recognize as Picard’s Romulan nemesis for many episodes. The race has three sexes with the third treated more like a pet than a person. This doesn’t sit well with Trip, who decides to try and educate the cogenitor. Obviously, this isn’t going to end well for anyone. It’s another Trek social episode that works without beating you over the head…too much.

Judgement and The Bounty deal with Archer being tried for assisting rebels by the Klingon Empire. There are many historic Trek connections to be found in these two episodes. The trial takes place on Narendra III, which is the Klingon base the Enterprise C was defending in Yesterday’s Enterprise. Of course it’s a vital link in the eventual alliance between The Federation and Klingons. Archer is sentenced to the penal colony of Rura Penthe where Kirk and McCoy were sent in Star Trek VI. The captain who charges Archer is named Duras and is an obvious ancestor of the family that shames Worf and tries to take over the Klingon Empire in a nice string of Next Gen episodes. In Bounty we see a Tellarite for the first time in a long time.

Regeneration: Of course, they just couldn’t help themselves. The Borg make an unexpected appearance in the past, thanks in part to the events in Star Trek: First Contact. A Starfleet group finds the remains of the round Borg vessel from that film buried in the ice of the Arctic Circle. They wake the Borg, and now The Enterprise ends up trying to stop them as they do what the Borg do best….assimilate everything in sight…including Enterprise. The episode attempts to bring the story full circle. The Borg are destroyed, but not before they send a message to their homeworld, which just so happens to take 200 years to get there.

The season ends with the Xindi attack on Florida that sets up a third season that will take up one continued story. Of course, that’s more common these days, but I wasn’t near as fond of it on a Star Trek series. To find out what I really thought of the Xindi story… to be continued.

Each episode is presented in its original aspect ratio of 1.78:1. The 1080p image is arrived at with an AVC MPEG-4 codec. This was the first Star Trek series to be filmed in both HD and widescreen. Most areas broadcast the series in that way so this will look very much like you remembered it, only better. The computer-generated ships and planets are the most impressive here. You really get a sense of what the original show could have looked like if it had been done today. Solid black levels really sell the deep inky blackness of space, while superior contrast really brings out star fields and other objects in space. There’s a texture to this show very different from the glossy world of previous shows that makes it all stand out. This was the way the show should have looked for all of you who didn’t have HD broadcasts ten years ago.

All of the features from the DVD sets are included in this 5-disc collection. There are also select deleted scenes and commentary tracks.

In Conversation: (1:33:49) This time Braga is joined by the entire cast, and they talk memories, both good and bad. Braga admits the mistake of the final episode and makes his apologies to the cast. He can’t help dominate the conversation, and it’s clear the amount of bitterness he feels over the show and the way fans think of him.

Uncharted Territory: There are three parts, each a half hour that cover the writers, cast and the course change to the third season Xindi story. You get most of the cast and crew here with plenty of clips.

There’s no doubt that this one was a natural to get the Blu-ray treatment. Paramount didn’t have to do a lot of expensive tweaks, and the best part is that it fills in those long gaps between Next Generation releases. I know the show isn’t as popular as some of the others, but in spite of my Berman complaints, there was plenty of good stuff here that deserves another look. I think all Trek fans were optimistic over the potential of Enterprise. “Optimism doesn’t alter the law of physics.”

Gino Sassani is a member of the Southeastern Film Critic's Association (SEFCA). He is a film and television critic based in Tampa, Florida. He's also the Senior Editor here at Upcomingdiscs. Gino started reviewing films in the early 1990's as a segment of his local television show Focus. He's an award-winning recording artist for Omega Records. Gino is currently working on his 8th album Merchants & Mercenaries. Gino took over Upcomingdiscs Dec 1, 2008. He works out of a home theater he calls The Reel World. Favorite films: The Godfather, The Godfather Part II, The Body Snatcher (Val Lewton film with Karloff and Lugosi, not the pod people film), Unforgiven, Gladiator, The Lion King, Jaws, Son Of Frankenstein, The Good, The Bad And The Ugly, and Monsters, Inc.
Political Animals: The Complete Series The World’s End